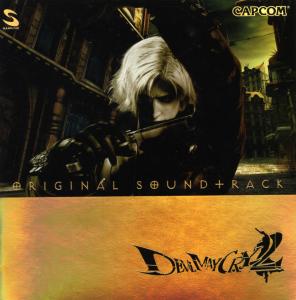 After a spectacular predecessor, Devil May Cry 2 had more flaws than anyone would have imagined. Fortunately, its score was not one them. While Masami Ueda left the series to join Clover Studio, Masato Kouda took centre stage to ensure that Devil May Cry's aural magic remained. He was joined by series newcomers Tetsuya Shibata, who went on to lead later scores in the series, and Satoshi Ise, also the sound effects designer for the game. The two disc soundtrack was released following a pre-sales campaign on the same day as the Devil May Cry Original Soundtrack. No individual credits are available in the soundtrack booklet, but I have a clear idea of who composed what based on my experience with Kouda on Devil May Cry, Shibata on Devil May Cry 3, and Ise on Capcom VS SNK. Let's see how it turned out...

Following an atmospheric piano line, Kouda's opening theme "Dance With Devils" develops into an electronic action theme full of Dante's cockiness. Just before the minute mark, the theme turns epic and exposes the powerful if somewhat generic main theme for the game on gothic choir. Similarly two-tiered, "Overture" restates the intention to fill this soundtrack with the elements that made the original so good, beginning with evocative piano and bagpipe musings before transitioning into electro-rock action. As there were few cutscenes in Devil May Cry 2, there are fewer event tracks in this soundtrack relative to other Devil May Cry scores. The enigmatic "Old Lady" establishes what few fragments of story there is in the game effectively with a subtle brass anthem briefly reprised in "Encounter" and "Power of Will" but never fully explored. More striking is Shibata's "Realize, Regret... Resolution", which portrays the story of Lucia with a tragic melody against sweeping piano arpeggios. The remaining event track "Defective Truth" is the most temperamental but reaffirms that, for what Devil May Cry 2's music has lost in quantity, it makes up with plenty of heartrending emotion.

The stage themes for Devil May Cry 2 generally add mood and emotion to the game. The lowertown theme reinforces the tragic undertones of the story in the first mission with a solemn string presentation of the main theme above deep chord progressions and moody sound effects. The uppertown theme relies on layering of a variety of forces above an rhythmically disorientating two note piano motif, creating very abstract imagery and some lovely timbral swells, while "Mad Factory" fuses the score's characteristic lachyrmose sound with mechanical noises. "Underground" also portrays the appropriate claustrophobic and eerie atmosphere with a slowly developing assembly of ambient noise. The two ruins themes add an organic and mystic element to the score while maintaining the previous dark and twisted soundscapes; they are also subtly individualised to portray the contrasting characters. There are several themes that are appropriately discomforting, but very superficial when stripped down to their musical elements. The clock tower's "Eternal" relies on little more than distorted clock noises and cringe-worthy string glissandi and "Destructive Step" simply comprises suspended strings, generic beats, and a few decorations.

The normal battle themes are easily the weakest elements of the score. Shibata builds Dante's "Fire Away" on the repetition of a single generic bass riff and, after failing to offer a melody or development, loops the piece after 30 seconds. Lucia's second battle theme "Demon's Paradise" is an assembly of Ise's vapid electronic beats with little evident intensity. These themes create an appropriately transient sound in the game and are sufficiently short to avoid irritating on the official soundtrack. However, they are intolerable in the game given they are inevitably endlessly repeated. Even Trish's battle themes sound like a broken record with their incessant bass riffs; there were so many opportunities to express novelty and personality here, but these are ultimately monotonous bonus tracks on an otherwise good album. In the end, only two normal battle themes suffice. Lucia's first battle theme "Wings of the Guardian" is a little better since it features electronic beats and a gliding melody, but is again peculiarly built upon repetition. Dante's "Shoot the Works" shines above the rest with a vibrant mix of grungy bass lines and bright synth licks coloured with dabs of the main theme.

Fortunately, the numerous boss and mini boss themes makes up for these disappointments. Most are dominated by driving bass rhythms and raw distorted textures, but are nevertheless individually characterised. Ise's "Parasitic Evil" reflects the enduring fight with Jokatgulm through integration of hardcore beats while Kouda's "Bust the Beast" features some particularly dazzling synth and descending glissandi reminiscent of Devil May Cry's mid boss battle theme. Both from Shibata, "Cursed Giant" conveys aggression with powerful drum rhythms and a classic malevolent riff and "Faithful Servant" represents a particularly significant battle with dabs of blistering high-pitch guitar work. Another classic is "Blast Off" for the escape of the factory, which would have been an excellent alternative to Dante's normal battle theme. There some tracks like "Assault" and "Uncanny Noise" that focus almost entirely on grunge rhythms, but their grit and energy still makes them engrossing. Most memorable is is "Evil Tower" which reprises "Dance With Devils" in suitably apocalyptic style. While some of the themes are used for more than one boss, this is forgivable given it ensures each theme makes a sufficient impact within the game.

Moving to the climax, the final dungeon theme opens with a powerful and urgent orchestration but takes a reductionist turn in the second half with the use avant-garde piano meanderings and eerie sound and voice effects. The tragic element to the story is emphasised with the reprises of Lucia's theme in "Please Kill Me" and the main theme in "Sacred Tears". In homage to Devil May Cry's "Underwater Temple", the encounter with the antagonist Arius is accompanied by the short but epic pipe organ chorale "A Praise of Evil" and the chorus-supported variation "Chaotic Gloria". Arius' battle theme "Cry for the Evil" is the direct successor to Devil May Cry's "Legendary Battle", reprising the action part of "Dance With Devils" in combination with furious electronic beats, distorted rock, and a choral interlude. The two bass-driven themes for the ultimate summoned beast, "Darkness Instinct" and "Ragnarok", do not disappoint, the latter even incorporating dissonant organ work to captivating effect. After a few cinematic themes in typical Devil May Cry fashion, the staff roll theme "Heads or Tails" satisfies with a catchy light rock theme in the first half and a reflective choral interpretation of the main theme to conclude.

Devil May Cry 2's soundtrack is undoubtedly an emotional experience. A sense of darkness and tragedy radiates throughout the event and stage themes while the invigorating battle themes, eerie ambient themes, and fantastic climax serve to emphasise the intensity. When the events fail to fulfil and the stages begin to the bore, it is often left to the score to carry the game and, thanks to its emotional intensity, it goes considerable way to do so despite the numerous weaknesses it has to compensate for. However, the score does not feel as exuberant or colourful as its predecessor. Affirming my suspicions that the score was rushed relative to its predecessor, many of the themes feature shallow or underdeveloped constructions and there less remarkable stylistic fusions here. Even if they don't fully recapture the magic of the original, the composers did a good job maintaining the mood and styles of Devil May Cry's soundtrack overall and the soundtrack is still jam-packed with enjoyable highlights. A solid purchase for Devil May Cry fans that is appreciable with or without the bitter game context.