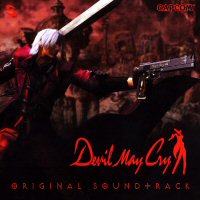 One of Capcom's first great successes for the PlayStation 2, Devil May Cry gained many fans for its exhilarating gameplay, gothic settings, and cocky dialogue. Its score was headed by Masami Ueda (Resident Evil 2 & 3), Masato Kouda (Darkstalkers), and newcomer Misao Senbongi. They collaborated to produce a genre-spanning soundtrack rich with ambient and worldly setting themes, rock and techno action themes, and orchestral cinematic themes. The result was almost universally praised, though Capcom were initially tentative to release it on CD following a series of low-selling releases. Instead they released a three track promotional CD and a novel visual soundtrack. They changed their mind three years later following a pre-release sales campaign and compiled all the music for the game into a well-presented two disc set. How did it turn out?

Stage themes are integral to the colour and mood of the soundtrack. "Ancient Castle Stage" exemplifies at the start just how unusual its stylistic fusions are. Punctuated by distinctive bass and percussion lines, the theme contrasts eerie motifs and marvellously sampled sound effects with intermittent empyreal orchestration. While the individual elements verge on derivative, they have a synergistic effect when paired together creating fantastic imagery and unprecedented soundscapes. Continuing with the castle setting, "Cathedral" provides the most impressive rendition of "Sparda's Theme" with four minutes of organ mastery. Ueda displays mastery over the instrument, fluidly incorporating a mixture of intricate two-part passagework and divine gothic chords. "Ancient Castle Basement Stage" builds horrifying sound and voice effects over slow-building background rhythms to create just the right atmosphere for the location. While the visuals are impressive, the aural accompaniment is far more evocative. Miscellaneous tracks such as the dark mood-setting select themes or the heavenly vocal-led "Statue of Time" further embellish the soundscapes of the game.

Another enjoyable feature of Devil May Cry are the battle themes. Kouda's "Public Enemy" is a strong regular battle theme mixing hard electric guitar rhythms with dazzling electronic melodies. The alternative normal battle theme "Lock & Load" has become a classic with time; it's utterly compelling with its subtly unsynchronised techno rhythms and unpredictable exotic layerings. Despite stylistically contrasting with most stage themes, its ephemeral feel helps the segues into and out of the theme work effectively during the game. The wild and menacing synth glissandi of "Psycho Siren" help to make the appearances of the Sin Scissors memorable and stimulating, albeit annoying with time. Another favourite is the underworld battle theme "Anarchy in the U.W.", where exotic ululations are combined with especially heavy beats. Among the bonus tracks are the themes used playing as Sparda. With "Super Public Enemy", Ueda distorts and technofies Kouda's original almost beyond recognition to stunning effect. Also among the bonus tracks are the electronica-pumped arrangement of Sparda's theme "S" and the highly melodic original version, which some may prefer to the edit.

The four main bosses in the game each receive fantastic battle themes. Phantom's "Red-Hot Juice" creates a formidable sound with grungy riffs and unpredictable breakbeats. Griffon, on the other hand, invokes imagery of a flying beast with its electronic synth gliding above hard bass riffs below. The long and intense battles with Nightmare are conveyed by repeating rock-techno motifs interspersed with occasional synth frills or eerie underworld chants. The boss even gets its own stage theme, "Nightmare Room", which creates a warped claustrophobic sound through pressing rhythms and eerie soundscaping. The best of all the boss themes is Nelo Angelo's "Ultra Violet", however. Never before have organ passages, choir interludes, techno beats, and gritty bass fused into something so energetic and catchy. The soundtrack announces all three appearances of each of the bosses with an event track. This is often to the detriment of the smoothness of the soundtrack, especially since the opening bars of their accompanying battle theme always follow, though there are some especially powerful appearance themes and the Nelo Angelo encounter themes segue into the battle theme wonderfully.

As with most Capcom soundtracks, the Devil May Cry soundtrack features a large number of event themes, created mostly by the third composer Misao Senbongi. Within the game, they work spectacularly to create a dramatic and unpredictable accompaniment to the various cinematic sequences. Incorporating plenty during its three minute playtime, the especially notable "Opening" establishes the cocky mood of Dante with its opening guitar riffs before deliciously darkening to set the story. "Eva's Theme", "Trish's Theme", and "Pillow Talk" have an important role in adding emotion and sentimentality to the game's story with a touching melody presented on different solo instruments. They're slightly reminiscent of clichéd Resident Evil 2 tracks, but well done overall. There are several others that are breathtaking even on a stand-alone basis, such as "Get Alastor", "Sparda's Image", "Get Dark Sword Sparda", "Nightmare Sealed World", and "Blue Orgasm". Despite these successes, there is material that feels like superfluous clutter out-of-context — the majority coming from the enemy appearance themes — though most of the themes are sufficiently short to be tolerable.

The later stage themes provide some of the greatest highlights. In "Underwater Stage", Kouda combines standard crisis motifs, complex electronic beats, and sound effects to add intensity to the sometimes bumbling middle chapter of the game. He displays further acumen for horror scoring by blending a fascinating variety of unresolved atmospheric noises for "Green Garden" and, used prior to a climactic nighttime encounter, "Colosseum". Back to the masterpieces, "Karnival" elaborates on elements of the "Ancient Castle Stage" to accompany the nighttime return to the castle. A mixture of 'tribal meets militaristic' percussion, high-pitched marcato strings, and horror sound and voice effects are incorporated. "Evil Vacuum" memorably captures the feeling of being sucked into the underworld with a variety of tribal and heavenly sounds fleetingly colouring suitably drab and uncompassionate beats. "Final Penetration" takes its influence from the motivating anthems used in the final areas of Resident Evil games, fusing a militaristic influence, Devil May Cry's characteristic electronic beats, and use of sound and voice effects. Another instant classic.

The final destination is marked by the grandiose and celestial organ piece "Underwater Temple". It's an unconventional way to present a final boss with but appropriately awe-inspiring nevertheless, again overpowering the visuals. Surrounded by a series of breathtaking orchestra, organ, and chorus event themes, Masato Kouda's final battle themes do not disappoint. "Legendary Battle" recapitulates the gothic main theme in combination with furious electronic beats, distorted rock, and underworld cries. After a 'Mars, Bringer of War' style introduction, "Legendary Battle Ver. 2" provides a warped and twisted take on the theme, but it's clear that isn't quite it. After the beautiful appearance of "Trish's Theme" and the commanding action gem "Bloody Bladder", Mundus makes a final appearance in a racy climax. Following a cringe-worthy voice-over, "Seeds of Love" captures the elation at the end of the game with a light instrumental rock piece. Far stronger is the vocal arrangement of "Trish's Theme" that successfully reunites the score thematically and curiously uses the gothic ensembles of the game to soothing and beautiful effect.

Devil May Cry's soundtrack is one of the finest Capcom soundtracks ever created. The soundtrack features a rounded selection of atmospheric stage themes, adrenaline-pumping action themes, and dramatic event themes. It is just as dark, dramatic, action-packed, and, above all, fun as the game itself and so works wonders in context. Its stand-alone charm derives from so many factors — with strong melodies, compelling rhythms, excellent sound quality, and capacity for nostalgia — and the inevitable filler tracks are only a minor occasional hindrance. What is especially effective about the soundtrack is how it amalgamates so many musical influences together — techno, ambient, rock, orchestral, industrial, baroque, and world music can all be heard — to produce mature, novel, and fascinating fusions. After displaying such flair here, it's no surprise that its three composers went on to great things — Masami Ueda headed Okami, Masato Kouda leads the Wild Arms and Monster Hunter series, and Misao Senbongi is a Resident Evil co-composer — though Devil May Cry's sequels definitely suffered in their absence. This is the definitive soundtrack of the series and, despite its high price, a highly recommended purchase.