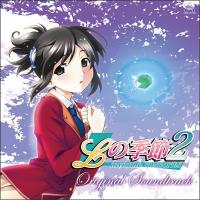 L no Kisetsu 2: Invisible Memories is a PlayStation 2 visual novel game that focuses on the female high schoool students. While unlikely to ever make it to Western shores, its game and soundtrack is likely to acquire popularity in Japan. The game's vocal themes were handled by Hitoshi Sakimoto and others while five secondary Basiscape members and Takeshi Abo (Memories Off, Remember11, Chaos Head) contributed the background music. This soundtrack was not published because it was a Basiscape work (the more significant score to Opoona would have been much more deserving in this regard). It was instead published because Five Records is a subsidiary of the game developer and has a history for publishing internally developed titles. Those wanting to be satisfied would be advised to approach this as a soundtrack for a visual novel title rather than Basiscape's next big title. Let's take a closer look at the music...

The album opens with the vocal theme "Bokutachi no Shinjitsu ~Story~". Yumi Matsuzawa's warm and youthful vocal melodies create a sentimental pop sound in combination with Hitoshi Sakimoto's ethereal instrumentals. Despite its necessarily derivative nature, the theme is surprisingly endearing given the vocalist's strong voice and the gorgeous development of the melody. It makes several reappearances elsewhere on the score as a welcome main theme. It is initially arranged for piano and strings by Mitsuhiro Kaneda, though is sadly hampered by inexpressive synth and predictable progressions. Fortunately, the theme proves versatile with Yoshimi Kudo's tropical take of the melody in "Victory" and its late integration into Kimihiro Abe's tender "All Alone After School". While the subdued "Bad End" and "Normal End" themes do not use the melody, its cheerful strings and piano arrangement in "Good End" is delightful. The ending vocal theme "Kimi ga ita Yesterday" is a conventional upbeat J-Pop theme by Ayumi Murata and Kazunari Ohno. It's not as endearing or melodious as the opening theme but is still fitting and features a lovely instrumental coda concluding with two piano phrases featuring the main theme.

The character themes dominate the first half of the disc. Yuka Kouno's mellow and dreamy personality is interpreted in another piano and strings theme, which creates sentimentality through its romantic shaping and light drums, while still being characteristic of Kaneda's unusual development and layering techniques. Kaneda also succeeds in creating a more eccentric theme for Komako Nanase, which features dabs of acid jazz influence but still fits with the sentimental feeling of the game. The themes for Haruta Narayama and Futaba Miozumi are unmistakably Kimihiro Abe's with their subtle rhythmical asynchronies and bold melodic shapes, but express a content character not present in his previously published works. The former is also subject to the adventurous arrangement "Funny Everyday Life", one of the most likeable additions to the disc. Yoshimi Kudo expresses plenty of character with his high-pitched woodwind use and energetic pop rhythms of affirming his position as the soundtrack's strongest contributor. Azusa Chiba, on the other hand, focuses on expressive violin work for Kana Sumiya's theme. She also uses expressive violin solos to form the highlights of the slow-developing "Night" and the romantic waltz "Love".

Moving on to Takeshi Abo's work, Yuri Hoshihara's withdrawn nature is explored by contrasting cold piano work, tragic violin, and hints from the oboe secondary melody of her once outgoing personality. It couldn't contrast more with the upbeat and gimmicky themes for the socialite Midori Asou. He also does a good job reflecting Nanai Kirishiro's studious attitude with meticulous if lulling motif use or the humour of Rumine Suzushina in a trumpet-led jazz piece. His strongest melody is probably heard in Shiina Unomori's lively theme and as such he reprises it in a slow variation featuring piano arpeggios inspired by Bach's Prelude in C Major on "Tranquility". Despite being able to create fitting and charming creations, the limitations of Abo's musicality are apparent in other such event themes. He seems to mainly focus on creating calming pieces featuring derivative piano arpeggios, as in the string-supported "Life Keeps Going On" and "Evil Crystal" or the pseudo-elaborate "Piano Piece of Running Water". His other offerings are goofy jazz pieces like "Delight". Were I more familiar with the game, I would not be surprised if the black-and-white treatment to most character themes were too simplistic.

Most of the remaining themes on the disc are darker tracks, though they're a mixed bunch. Despite moments of ingenuity, Mitsuhiro Kaneda's SE and Crisis themes are among the most unrefined and underdeveloped of the score; he creates ugly soundscapes by focusing on repeating poorly synthesized string crisis motifs and adding out-of-place electronic beats to them. "Theme of Trismegistus" is similarly disappointing with its uninspired use of ascending strings, modernist utters, and abrupt cadences taken from horror movies, though Kaneda nevertheless continues to integrate his unconventional musicality and even offers a touching interlude. Kudo produces a slightly more effective version of the theme in "Fear" despite the weak source material and also shines with his penetrating string use and dynamic texturing of "Competition". Noriyuki Kamikura also receives another opportunity to shine as a composer with his mature and compelling fusion of electronic, jazz, and orchestral elements in "Tension" and "Determination". Azusa Chiba doesn't seem as comfortable in horror territory with "Nightmare", which seems like a very hesitant effort despite its atmospheric qualities and eventual exuberance.

The L no Kisetsu 2 Invisible Memories Original Soundtrack becomes quite an endearing work with repeated listens. Those who have enjoyed it within the context of the game will surely find it charming and nostalgic on a stand-alone basis too. It has many strengths such as strong vocal themes and instrumental arrangements, a large and fitting set of character themes, and some drama and sentimentality in its latter half. As a side project for all composers involved, the soundtrack does lack exuberance though. While Yoshimi Kudo and Azusa Chiba make promising compositional debuts and Noriyuki Kamikura and Kimihiro Abe produce solid material, the two leading composers seem to struggle here. Takeshi Abo appears to be a two trick pony and easily the least proficient of the composers here. Despite usually producing outstanding works, Mitsuhiro Kaneda seems very rushed here and his crisis themes are especially unpleasant. Those expecting Basiscape's next big score will be disappointed with this purchase. However, those who tend to appreciate visual novel soundtracks or have some affiliation for the game might like to pick this one up.

Performed by Yumi Matsuzawa, Ayumi Murata
Album was composed by Хитоси Сакимото and was released on June 25, 2008. Soundtrack consists of tracks with duration over more than hour. Album was released by 5pb. Records.