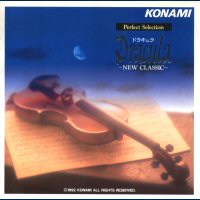 The Perfect Selection Dracula album was a very convoluted affair. Mixing old school hip-hop, 80's rock, synth-pop, and the occasional orchestral palette, the album ended up sounding very messy and divided audiences.Interestingly enough, the same musicians responsible for Perfect Selection Dracula ended up producing another album by the same name but subtitled "New Classic". Vaguely referring to neo-classical music, the title obviously meant a shift of musical style and direction into classical territory, marking the first time that the Castlevania franchise attempted to go orchestral. Still, Perfect Selection Dracula New Classic (a real mouthful if you ask me) follows the same tradition of being highly experimental like its predecessor and features some dubious artistic choices. Led by Nazo Nazo Suzuki and arranged by Jun Irie, the album ends up being an extravagant, if abrasive, fusion of the beautiful orchestral performance by the Konami Symphonic Ensemble and the synth-pop elements of the Nazo2 Project. While there are some gorgeous cues featured in this album, it doesn't really deserve the hype and reputation that it has among a subset of Castlevania fans.

The album starts with an elegant and charming medley of "Vampire Killer" and "Wicked Child". It's a well-performed arrangement that is very melodic and entertaining, despite being slightly repetitive and overlong. "Beginning" is stylistically similar and equally well-presented, yet has a much more adventurous tone. It's a faithful arrangement of the classic theme from Castlevania III, but it feels a little underdeveloped unlike the previous effort. What's more, the production quality is not particularly exceptional with the awkward mixture of synthetic and orchestral elements. "Ever Green", on the other hand, is an emotional and relaxing arrangement filled with beautiful and harmonic violin solos. It's not really that memorable and suffers from production inconsistencies, but it's still a good listen.

Since this album is all about classical music, one would expect to be emotionally and mentally moved from listening to it, expecting a truly immersing experience. The only track of the album that really comes close at achieving that is the medley of "Hearts of Fire" and "Out of Time". The interpretation of "Hearts of Fire" is gorgeous, with a smooth string progression, offering a soothing, romantic, and heroic ride all at same time. It's very beautiful, and completely blows your mind when you compare it to the original. Unfortunately, it's not perfect. What I don't like is the obtrusive middle section that reprises the motifs of "Out of Time" that end up disrupting the smooth and harmonic progression previously heard. It doesn't really kill the whole arrangement, and the section is nice on its own, but needless to say, just one cohesive and well-executed "Hearts of Fire" would have been awesomely perfect.

"The Cave" is similarly impressive and emotionally moving like "Hearts of Fire". It features calm, soothing string motifs that create an almost ethereal soundscape, in conjunction with with some really beautiful melodies. It captures the essence of being into a deep cave full of underground marvels extremely well. Fortunately, there are no abrasive elements this time around, and the track ends up being my second highest recommendation from the album.

But there are some more experimental tracks that go beyond the realms of conventional orchestral music. The best and most well-executed example of this is the arrangement of "Bloody Tears". Combining a calm synthetic percussion with beautiful piano notes that reprise the original theme, along with some wonderful, soothing flute solos, the track captures the listener's imagination and emotions. It's very moving and relaxing, despite being slightly melancholic in line with the rest of the series' music. Still, the synthetic elements, while not abrasive in this particular track, might be unwelcome by skeptics.

Unfortunately, this statement really stands out for "Dwelling of Doom", no matter what your taste may be. The structure of the arrangement is phenomenal, reprising the original's melody while giving it a completely different dimension, shifting the aural experience to a more mystical, ethereal tone. Featuring some incredibly beautiful violin solos, and later a very captivating acoustic guitar section, the music manages to be incredibly moving and memorable. Unfortunately, there are many synthetic elements mixed in, like the percussion and, most controversially, the synthetic flute melodies. These artistic choices really can hinder the overall aural experience, since the fusion of these elements feels slightly awkward. Unlike "Hearts of Fire ~ Out of Time", these features can really make listeners raise both eyebrows and turn them away from this otherwise spectacular but mistreated arrangement.

"Praying Hands" and "The Legend of Dracula" both suffer from the same fate. Despite featuring a great orchestral performance, these tracks can be easily ruined by the low quality synth and keyboard elements that are used. Even worse, "Monster Dance" is entirely made of these factors. It mixes some exquisite electric guitar solos with exotic and unique underlayering mixed. However, the final result is rather a hit-and-miss affair that simply doesn't feel part of this album. It even ends abruptly and doesn't fade properly, making me think that they had second thoughts of putting this on the album in the first place.

I personally find the music in Perfect Selection Dracula New Classic strangely enjoyable with its mixes of synths and live orchestra. While no symphony, the music really manages to sound unique, and on top of it, very enjoyable. But despite my open-minded approach, even though I am a retro lover, I get turned down by synths quite often since they do not integrate well with the orchestral parts and, during certain parts of the album, listeners will find themselves asking "What were they thinking?!". I have done this too quite often, but other times I just ended up following the flow of this album and enjoying the result. Despite the strange artistic choices, the abrasiveness, the production value issues, and the very niche target audience, in the end, the album still manages to be very emotionally moving. It's relaxing, imaginative, and, more impressively, captures the feeling of mystical and ethereal landscapes in a very unique way. Just be really careful about deciding to pick it up, especially with its high pricetag nowadays.