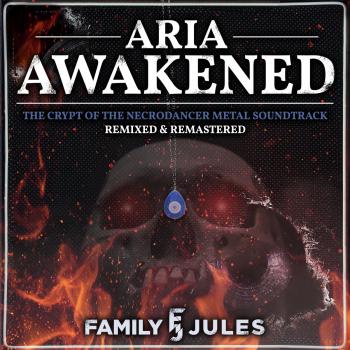 "In 2015, Brace Yourself Games released the megahit, Crypt of the Necrodancer. Never before had people been given the option to combine rogue-like dungeon crawling with all the intensity of a rhythm game to the incredible soundtrack by Danny Baranowsky. YouTube guitarist FamilyJules provided the earth crushing metal soundtrack to the game and now you can experience the definitive mixes of those tracks, plus the 4 new tracks released in the new DLC, Crypt of the Necrodancer: Amplified.

Jules brings you all the songs you loved from 2015's Aria's Ascent but this time mixed to be more full, crushing, and clear. Get ready to hear all of the songs from before with added harmonies, sections, (explosions?) and overall clarity never before heard from these tracks. In addition to the four new tracks, also enjoy the album intro, Aria's Ascent, featuring Travis Carte as well as Molevolence, feat. Ahren Gray doing the Fortissimole rap in a metal style!"


All music composed by Danny Baranowsky
Arranged and performed by FamilyJules

Jules uses Schecter Guitars and Ernie Ball Strings
Recorded using the Axe-FX II XL+ with Cubase 8.5
Album was composed by Дэниэл Барановски and was released on January 24, 2017. Soundtrack consists of 33 tracks tracks with duration over more than hour. Album was released by FamilyJules (distributed by Bandcamp.

Chipped of the NecroDancer: AMPLIFIED • 2017
Digital

Crypt of the Necrodancer: The Synthwave Cuts • 2016
Digital

Aria's Ascent - The Crypt of the Necrodancer Metal Soundtrack • 2015
Digital

Crypt of the Necrodancer: The Melody Mixes • 2015
Digital

Crypt of the Necrodancer Soundtrack • 2015
Digital