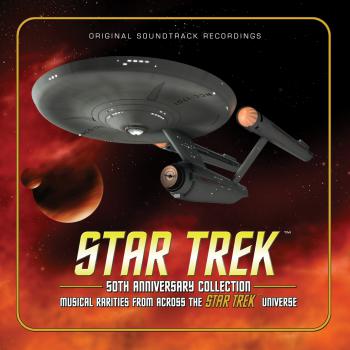 DISC ONE features cues from the original, classic STAR TREK TV series (most of which were released on our TOS BOX SET, but have been sourced from newly discovered elements), as well the oft-requested STAR TREK: THE MOTION PICTURE track “Inner Workings,” (featuring the wind machine more prominently) and STAR TREK II: THE WRATH OF KAHN’s “End Titles,” (without the narration as heard on previous soundtrack releases.)

DISC THREE features previously unreleased scores from STAR TREK: THE NEXT GENERATION, including such episodes “Coming of Age,” “The Hunted,” “Tapestry” and more, as well as the series’ trailer music.

DISC FOUR contains more unreleased THE NEXT GENERATION, including “Deja Q,” “Elementary, Dear Data,” and others, as well as unreleased demo tracks from DEEP SPACE NINE, and VOYAGER, original score from the famed Las Vegas attraction, STAR TREK: THE EXPERIENCE, and still more!

Produced by Lukas Kendall and mastered by Doug Schwartz and James Nelson, this special collection contains a 48-page booklet with exclusive liner notes by writer Jeff Bond and stellar art design by Mark Banning. This treasure trove of musical gems from the most celebrated sci-fi television series of all time has a total running time of more than five full hours and is limited to 3000 units.

Dennis McCarthy wishes to thank:
Patty McCarthy, David Grossman, and a big "Yo!" to all the wonderful musicians who contributed their talents!