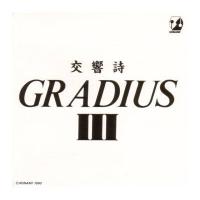 There are several things which are not entirely true about the title of this album. For instance, while the vast majority of tracks do come from Gradius III, there are a number of tracks which originate from the original Gradius, Gradius II, and Salamander. And while the title carries the word 'symphonic', that is not entirely true either. Yes, acoustic instruments are used which would primarily appears in a symphony orchestra, but there are also moments where electric guitars appear and even sound effects from the game itself amusing as that may be. That is not to say that fans of classical music will dislike this album. If they wish to hear the music of Gradius set to a more traditional orchestra feel, then they should head on over to Gradius in Classic I which would probably be more to their taste.

Now that we've gotten that precaution out of the way, let's take a look at the core of this album itself. Brought to us by various members of the Konami Kukeiha Club (referring to the sound team, not the cover band), we have here a series of medleys filled with arranged music from the Gradius series. Although in truth, this album tends to stick by the original structure of the tracks and merely replace the synthetic sounds with actual instruments, the results are still very powerful and moving at times, and yet frustrating at others. Let us delve into this soundtrack now.

The soundtrack begins with the track "Overture", which starts off with a lone flute and then draws in luscious strings. The instruments build to a swell that occurs at 0:47, leading to the exposure of the opening lines of "Prelude of Legend" from Gradius III on brass. The brass slowly fades away letting the string takes control and perform a stirring rendition of the core theme. Without warning, the track jumps to the theme "King of Kings" at the 2:05 mark; the trumpets make a bold entrance and lead this track until the third theme makes its at 2:37, but unfortunately this sinister interlude doesn't quite hold interest. The return to the original theme at the four minute mark manages to redeem the track. Moving on, "Departure" starts off with the track "Invitation" After a big and bold introduction, the track subsides at 0:11 and transforms into a much more relaxed form. The medley undergoes a transformation at 1:13 and suddenly bombards listeners with electronic sounds in an especially rhythmic passage. This carries on until 1:36 where a harp glissando rolls in with a jamming brass section. The core melody line starts up at 1:58, led by the trumpet section still being accompanied by the lower brass and the electronic noise. This version of "Cosmo Plant" is much more relaxed in tempo and less frantic than the arcade original and this works quite well in its favor allowing it to develop naturally. Suddenly at 3:00 everything fades away and the cycle starts all over again. Unfortunately, a repetition of the original occurs but then at 4:45 an electric guitar rolls in and jams with a piano while being backed up by the electronic drum track. At 5:28, it returns back to the same structure as 1:36 until the track reaches its end. While there are some brilliant twists and developments, the three repetitions of the "Cosmo Plant" section might start to wear a bit thinly, at least towards the end.

"Battle 1" is a mishmash of different themes from Salamander, Gradius III, and Gradius II that were supposed to convey danger and tension. The only complaint I have about this track is the haphazard way that the themes are strung together. You never get any sense of cohesion because the track which is being showcased tends to jump around. It does reach a brief moment of clarity at 2:03, but then descends back into the chaotic mess. I wasn't nearly as impressed with this track as the first or, to a lesser extent, the second track. "Boss" expectedly contains a collection of boss themes. Unlike the chaotic mess of the last track, here we are introduced quite clearly to the core boss themes from Gradius and Gradius III with some Salamander thrown in for good measure. The medley starts off with "Easter Stone" from Gradius III and effectively builds tension up using the strings and bursts of sound from the other players. The tension builds to a swell and returns to the core theme at 1:20. Suddenly at 2:24, an arrangement "Boss BGM" from Gradius appears. It's a rather shapeless and formless theme, and to orchestrate it almost seems like a pointless venture, as it consists of the same progression of notes repeated over and over and over again. The medley changes course at 3:50, and returns to Gradius III with the rhythmic "Final Shot". From 4:30 to 5:10, we get the strings playing a simple series of notes with the flutes replying with a single lone tone. Finally we get "All Pattern Clear" from Salamander at 6:10 until the end of the track. It's a nice sweet theme which is an easy contrast from the original themes.

Listeners are thrown back to the introduction with a second rendition of "Invitation" in the track "Prelude". The instrumentation is slightly different, although the big bold fanfare does get a bit old. The track takes a slightly different path at 1:20 with a somber transition to the next theme which starts at 2:11 — the end credits music for Gradius II Gofer no Yabou, "Farewell". The short stay that this track endures is unfortunate, as the track almost immediately reverts back to the origin at 2:56; the only shining moment in the track is ruined by the fact that "Invitation" takes up far too much space. "Battle II" is an odd track. At moments you'll hear the synthetic sound effects from the actual game itself lying in the background of the music; this is unique, and actually makes an otherwise dry track seem a bit more interesting. The track consists of a medley of two themes, which were explored in the first track "Prelude of Legend" and "King of Kings". If that seems odd, fast forward to 1:49, which is really eccentric. It features the orchestra accompanying what sounds like the game playing in the background. This odd mixture of sounds is actually quite unique and they tend to play off each other quite well. It's almost a shame that this strange style of arrangement didn't make an appearance throughout the album.

With "The Final Battle", a medley of "Crystal World" and "The Final Enemy", the guitar makes a brief appearance again. With a track time of 7:52, one would correctly expect some repetition. The real shame of this album is that the arrangers tended not to quit while they were ahead and instead continued to beat us over the head with endless repetition of the same themes. Although the addition of the electric guitar at 1:49 is unique, it still doesn't entirely salvage this track. "Finale", though, is a really strong arrangement throughout, featuring a lovely rendition of "Return to the Star". The track changes tone at 1:48 to a very somber and serene theme than the build-up to it would suggest, creating one of the unique surprises of the album. At 2:48, the track takes another quick turn to something more bold and upbeat, which carries through until the last section of the arrangement. The conclusion returns to some of the many themes which we have heard make their appearance throughout the soundtrack. That includes the core themes of "King of Kings" and "Prelude of Legend". Weren't we sick of those themes two tracks long ago?

Truthfully, I want to love this album. There are some lovely shining moments and they are amongst some of the best and straightforward acoustic renditions of the series' themes (as compared to the overly ornamental orchestral arrangements featured on the Gradius in Classic album). The problem with this album is that there are far too many instances where the arrangers return back to the safe bet, going back to the instant classic bold flashy fanfares. There are moments of creativity, such as the odd improved guitar solo jamming with the piano, or the session where the instruments accompany what sounds like the game playing in the background. And there are some really lovely themes which appear — the first time they appear at least. It's an album that if you stumble upon, I'm sure you'll find enjoyable, but also notice some of its flaws as well.

Side Note:
The characters on the front cover is actually reflective gold in color,not black.
Album was composed by Harumi Ueko / Кадзухико Уэхара / Kazuki Muraoka / Konami Kukeiha Club / Юкиэ Моримото and was released on June 05, 1990. Soundtrack consists of tracks with duration over about 50 minutes. Album was released by King Records. 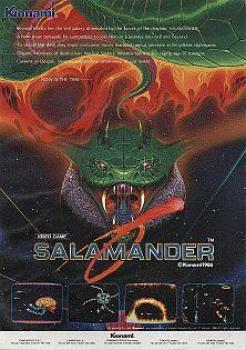 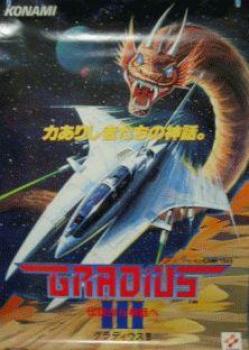 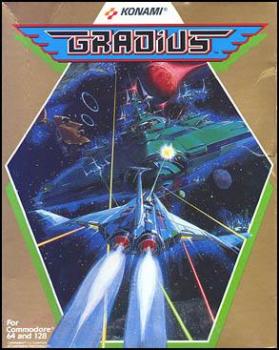