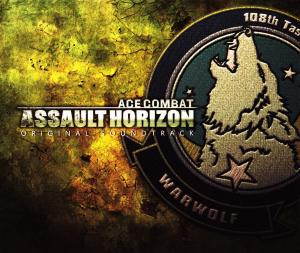 The latest instalment of Namco Bandai's enthralling flight action series, Assault Horizon finally took gamers away from its alternate reality setting and into the real world. Whereas such shifts have made the West's biggest shooters even bigger, Ace Combat's reboot alienated as many hardcore fans as it introduced newcomers. The game nevertheless stood out for its immaculate presentation, from graphics to soundtrack. Keiki Kobayashi returned as music director for the title and combined his thematic military orchestrations with new styles and fusions. To ensure the soundtrack was cutting-edge, he introduced experienced composers Rio Hamamoto, Norihiko Hibino, and Jesahm to the series, and collaborated with various ensembles and vocalists from East and West. The complete three disc soundtrack was available with the game's DX Pack in Japan.

Kobayashi captures the rebirth of Ace Combat in a modern day setting with the opening overture. Inspired by the imagery of a sandstorm, Kobayashi shifted away from his familiar orchestral stylings in favour of dark and rustic Middle Eastern performances. Kobayashi shows his versatility with his authentic oud and nay writing here, while the performances by Israeli Yuval Ron testify to his decades of experience. Yet not everything is alien. The rich military melody that eventually emerges is reminiscent of Kobayashi's work on The Unsung War and reinforces that, despite the shift in setting, Assault Horizon is still a story about a desperate humanity. Perhaps the highlight of this six minute mammoth is the build-up where the Northwest Sinfonia, Middle Eastern instruments, and vocalist Maya Haddi come together. What a great way to portray the climax of a struggle... "Deja Vu" takes the score to its darkest and deepest place with a breathtaking a capella performance. Thrashes of an electric guitar occasionally interrupt Emma's vocals to demonstrate the brutality that inspired her desperate cries. With both tracks, Kobayashi proves once again that he is capable of writing superlative music for the Ace Combat series.

The shift to a modern setting is also marked by the incorporation of contemporary elements. Used in two key missions in the Middle East, Rio Hamamoto's "Rush" and "Beyond the Canal" are dense and chaotic fusions of all sorts of rock, electronic, and traditional forces. Both keep gamers gliding through the skies, while emphasising that much grittier conflicts await them this time around. The former's flashy guitar solo provides a heroic climax to an otherwise formidable theme, while the heavy electronic distortions of the latter ensure the intensity only increases. For the game's epic showdowns, "Keep Alive" expands on the choral motif introduced in "Rush" and pumps it up with electronic beats and rock riffs. The turbulent "Decisive Battle" further demonstrates Hamamoto's individuality while portraying allies and enemies with its shifting sections. A novel collaboration between Kobayashi and Hamamoto, "Dogfight" is a brief but outstanding contribution to the score. The combination of the former's lyrical orchestral reprises and the latter's gritty rock riffs results in an immersive wall of sound. The violin solo at the 1:04 mark might just pierce a heart or two with its unexpected beauty.

As one of the series' most cinematic and ambient scores, Assault Horizon nevertheless features numerous pieces that don't stand up as well as Once again, Hiroshi Okubo focuses much more on rhythm and texture than melody on tracks such as "Inferno", "Launch", and "Hangar Bay #1". These tracks certainly enhance some of the game's most tense scenes and are also quite creative with their blends of Eastern and Western percussion and ostinati. However, they are definitely among the most understated and repetitive additions on a stand-alone score driven by its soul-wrenching anthems. "Paint" is particularly unappealing out of context with its six minutes of minimalistic electronic sounds. The guest contribution by Norihiko Hibino's GEM Impact is also of debatable worth. "Pipeline", "Homefront", and "Hurricane" definitely capture the tone of a big budget movie with their Zimmer-inspired orchestration and crystal clear performance. But they also sound like they could have been created for any big-budget project and don't have the individuality needed to make an impact in Assault Horizon's world. With tracks such as "Driven" and "Fight Back", Kobayashi compensates by ensuring that one thing always transcends those tense string build-ups and aseptic electronic beats: those all-so-human thematic elements.

Those that stick with the soundtrack till the third disc won't be disappointed by the climax. "Over There" is a more moody and abstract arrangement of "Dogfight" that reprises the main theme, while "Mrs. Krista Yoslav" is another stunning vocal solo with a soothing yet tragic tone. For the final mission theme "Release", Keiki Kobayashi reflects the shift of the setting once with a mean and moody orchestration that sounds like it came straight from Hollywood. Nevertheless, the grandiose choral chants inspire memories of "Megalith -Agnus Dei-" and the thematic fragments that occur maintain the attention. It isn't quite as enjoyable as "Zero" or "The Unsung War" on a stand-alone basis, but it's a fitting final mission anthem nevertheless. His final orchestrations, "Horizon", "His Repose", and "Dying Echoes", are quite conventional but fittingly round off the release thematically and emotionally. But there is one other glaring addition to the soundtrack, "Gotta Stay Fly", a hard rock theme song composed by Rio Hamamoto. Most of the track is dominated by heavy guitar riffs and abrasive vocals from Ken Stacey. Nevertheless, the main theme of the score is nevertheless integrated, culminating in a heavenly interlude featuring Emi Evans. Some will find it cool, others will think it's vapid, but it certainly fits the image of Ace Combat: Assault Horizon.

Showing that Japan can do it as well as the West, Ace Combat: Assault Horizon rivals the upper echelon of game or film scores with its production values. Yet unlike so many of today's modern military soundtracks, this score is rarely derivative with a few exceptions aside. The wild yet wonderful fusions breathe fresh life into what sounded like a tired franchise, while the rich melodies ensure the series still moves listeners. While the score is best appreciated as a complement to a visually stunning game, the soundtrack release is jam-packed with highlights that should satisfy on a stand-alone level. Just beware that, while all the music is fitting and meticulous, some tracks aren't necessarily entertaining on a stand-alone level. Whereas Kobayashi's past scores in the series have felt nostalgic in their approach — though certainly not in a bad way — Ace Combat: Assault Horizon sounds cutting-edge and hopefully heralds a new era.

[*] Works made by employee of NBGI in the course
of his/her duties.
Works made under the name of NBGI, pursuant
to the copyright law of JAPAN. 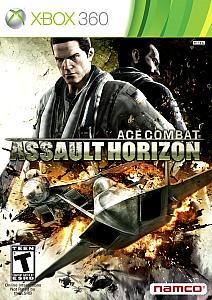 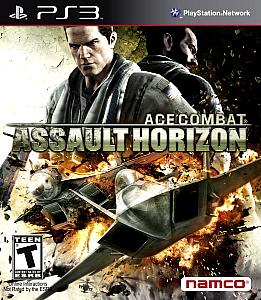 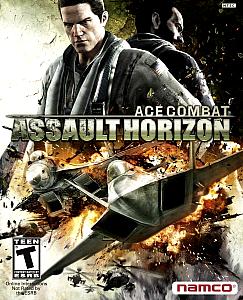