Best of the Best: A Tribute To Game Music 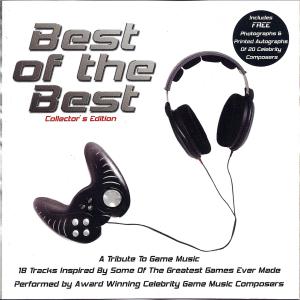 Best of the Best: A Tribute To Game Music
Лицевая сторона

Best of the Best Volume 1 is a compilation of game music arrangements and original compositions inspired by famous games. It features the contributions of 20 Western game music artists from America's main game audio representation company Four Bar Intertainment (affectionately known as the FBI). One might be misled into thinking this is an official compilation of game music with its grandiose name and endorsement by artists like Inon Zur, Jack Wall, and Mark Griskey. However, it was actually published to promote the website Game Music Central where fans and artists alike were supposed to interact. The site didn't last long so don't expect Volume 2. The FBI couldn't get permission from Nintendo and Square Enix to publish their music from Mario, Zelda, and Final Fantasy into a compilation album. As a result, they went down the unofficial route by publishing the album themselves, complete with shoddy packaging, through the website. Could an album with such a dubious background really be the best of the best? In short, no. The album has many highlights but it's intrinsically flawed too...

The album opens on a strong note with an ultra-cool modern tribute to Tommy Tallarico's Earthworm Jim 2 classic "Invertebrate Retreat". The remix blends desperate male vocals in conjunction with atmospheric trip-hop synth pads and bluesy electric guitar wails. The catch? The remix is by fan arranger Daniel Baranowsky and has already been published in The Earthworm Jim Anthology. As great as it is, it's a dubious way to open a so-called official album. Tallarico's partner Jack Wall was also unwilling to offer an original arrangement for this album either and simply reprises "Exile" that featured as a bonus track on the Myst III soundtrack. It's another modern and well-produced entry featuring evocative vocals from Cindy Wall and moody electronic backing. However, listeners may once again feel cheated by the direct repetition here. Tom Salta's "Around the World" is another track that has seen a lot of mileage in more ways than one. However, this rendition is its most definitive version and offers a dynamic blend of electronic, hip-hop, and ethnic features. One of the major highlights of the CD.

There are a range of instrumental tributes to Japanese classics on this album. Silent Hill's main theme is given an abstract rendition featuring Cris Velasco's cinematic orchestral samples and Sascha Dikiciyan's grungy electronic beats; the personal melancholy feel of the original is lost in favour of an edgy and driving horror feel. Another dynamic duo, Jason Graves and Rod Abernethy, give Final Fantasy X's "To Zanarkand" a hard techno remix. However, the boundless and passionate feel of the original still comes across thanks to some exuberant buildups and increasing melodic emphasis. Surprisingly good. Much of David Arkenstone's The Legend of Zelda remix is an introspective and nostalgic one — opening with an ethereal acoustic interpretation of the main melody before transitioning into a quietly brooding rendition of the underground theme. However, the conclusion is full of the majesty of brass and heroism of electric guitars. Less interesting is Will Loconto's take on the "Super Metroid Theme". Though the electric guitar can be enjoyable, the melody isn't convincing in this rendition and the electronic backing often feels vapid.

More dubious are the vocal arrangements scattered across the disc. Winifred Phillips' take on Super Mario Bros.'s famous soundtrack consists of jubilant female singing against random 8-bit bleeps. It certainly represents Phillips' youthful enthusiasm for these title and is quite creatively done. However, the piece is nonetheless a total misfit in a relatively serious album and much of it is very difficult to tolerate, especially the increasingly fast and loud conclusion. Her God of War associate Gerard K. Marino is given the honours of remixing Chrono Trigger's main theme. His arrangement exudes a fresh and subtle jazz feel, but the scat vocals become get quite jarring after a while. Such material would have been better in an underground classic remix album, not the so-called definitive game music experience. And then there is Disney game music composer Billy Martin's tribute to Kingdom Hearts. It is actually an light jazz-influenced vocal composition but has absolutely no relation to the themes in Kingdom Hearts. It's quite enjoyable and will make listeners feel good with its uplifting vocal melody and reassuring lyrics.

There are still some good entries to this album based on Western compositions. Lennie Moore's old-school rock interpretation of Duke Nukem's main theme is considerably better than the earlier mentioned rock entry. With plenty of lyrical melodic moments and wild electric guitar solos, the remix lives up to the iconic introduction "It's time to kiss ass and chew bubble gum. And I'm all out of gum!" LucasArts' Mark Griskey gives a subtly punctuated take on Medal of Honor's "The Vengeful Spartan". Though straightforward, it's impressive how ethnic, acoustic, and electronic forces are subtly layered to intensify the piece. On the opposite end of the dramatic spectrum, Chance Thomas gives a tribute to those lost in World War II with his meditative piano-based improvisation based on Medal of Honor. His piano work is personal, subtle, and elegant while the emotional arch of the arrangement is breathtaking. Chris Rickwood also provides some of the quieter moments on the album within World of Warcraft's fantasy realms. However, the melody often feels unconvincing and unrelated to the minimalist accompaniment.

The remaining entries on the entry are mostly dubious ones. Despite his legendary status in the video game industry, Jesper Kyd could only manage an original composition that lasts 1:39 here. What is provided in "Beneath the Surface" is atmospheric but ultimately derivative and unfulfilling. An anomalous addition is Inon Zur's "The Hunt". Though it stays faithful to the ethno-acoustic style listeners have come to love him for, it is apparently inspired by Conan the Barbarian. The movie certainly influenced many games and its score is one of Zur's favourites, but it still seems inappropriate in a game compilation — especially one with a lot of notable omissions. Another movie-inspired track is Colin O'Malley's "The White Horse" from The Lord of Rings. With vibrant brass melodies and sinister choral interludes, this arrangement offers the last dash of epic orchestral colour towards the end of the CD. To conclude the album, Daniel Sadowski creates a track influenced by Roboblitz. It offers catchy melodies, compelling rhythms, and retro electro-funk influences, but isn't a coherent resolution to the album.

The FBI doesn't come close to fulfilling their pretentious goal of creating the 'best of the best'. However, the album is basically an enjoyable and interesting listen throughout nonetheless. The more mainstream-oriented tracks are often very well done, the instrumental tributes are usually interesting and enjoyable, and there are a few orchestral and acoustic highlights too. A few additions fall short, such as the jarring vocal tributes and the recycled or sloppy material. Probably the biggest problem of the album — aside its dodgy packaging and ridiculous title — is that it claims to be an official album when it wasn't published by a true record label, features recycled fan arrangements, and wasn't endorsed by all the companies and composers featured. Many will feel cheated that an album marketed as an official compilation is actually a hybrid of official and unofficial game, film, and original music. The Japanese composers featured here probably feel even worse since few of them even gave permission for American artists to do whatever they liked to their originals. The album is still worth a listen since it has a lot of highlights, but people should be aware it's flawed and deceptive.

Tracks preview provided by iTunes. If you like Best of the Best: A Tribute To Game Music, we strongly recommend to buy it. Support composers, artists and performers so they can release more music in the future. Furthermore, it's inexpensive. This album costs only 9.99 USD. Prices and shops where you can buy it are at the right column.