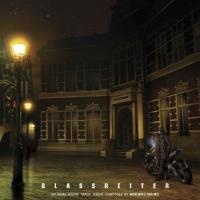 Norihiko Hibino's GEM Impact team have lived up to their name this year by participating in numerous high profile projects. One of these was Studio Gonzo's big budget anime project Blassreiter, a series set in Germany featuring biomechanical creatures called Demoniacs. Though the team had anime experience before with ROBO ROCK, Blassreiter was an altogether bigger project and all four composers of GEM Impact were involved. They scored two hours of mostly dark music featuring ambient, jazz, rock, electronic, orchestral, and oriental elements. The team rejected the 'bigger the better approach' of many anime scores in favour of making every instrument count. This added a very personal feeling to the music essential for bringing out the emotion of the story.

At the centre of soundtrack is the "Blassreiter Main Theme" composed by Norihiko Hibino. The melody is intrinsically simple, based on series of descending three note figures concluded with suspensions, but this only adds to the lonely and melancholy feel intended. The main version of the theme features the melody on saxophone above dusky synth pads. Hibino's performance emphasises the anguish and tragedy of every note, ensuring the piece is breathtaking every time it is played. The main theme makes several appearances elsewhere in the soundtrack, ranging from the rustic guitar-based "Pain to Afflict", the two-tiered piano and cello duet "False Confession", to most subtle inclusions during the development of major pieces. Its most explicit arrangements are two electronic remixes at the end of disc one; they exhibit an upbeat and retro sound while subtly contrasting the characters of Gerd and Hermann. The obligatory reprise of the main theme at the end of the soundtrack for saxophone and piano is also satisfying — again minimalistic but this time warm and soothing.

The dark mood of the soundtrack is maintained with many of the other tracks. "Introduction of the Apocalypse", for instance, ensures listeners are disturbed early into the experience with dissonant prepared piano notes and sporadic clattering percussion. Perhaps even more experimental, "Zwolf's Bio Lab" verges on being ambient noise, though there are some musical fragments to add to the eccentricity, while "A Day of Judgement Vol. 2" is a wandering solo piano composition full of contrast and uncertainty. "Gerd Frentzen" initially builds a meditative electronic groove, but soon takes a sinister turn with the punctuation of increasingly elaborate string and brass crisis motifs. There are also a few lighter surprises along the way, such as Ryo Sakagami's dazzling jazzy flute solos in "Beatrice", the music box solo of "Confectionary from Juchheim", or the playful violin-led homage to Radiant Silvergun of "Old Days". "Shido" is another highlight, exhibiting a raw shakuhachi-led sound that is especially elaborated upon in the extended version on the second disc.

The album nevertheless features some action-packed pieces. "Circuit" is a drum 'n bass meets grunge piece with ferocious racing rhythms and abrasive distorted textures. Takahiro Izutani's ingenuity with this style is further demonstrated in tracks like "Apocalypse Knights" and "Hermann". GEM Impact also demonstrate their ability to engagingly layer orchestral motifs in "XAT", "Fight for Love", "Trap", or "Air Battle", some of which are reminiscent of their Metal Gear Solid 4 work. "A Day of Judgement Vol. 1" and "Overpower" are refreshingly the only examples of cinematic orchestra and chorus pomp in the score, but are nevertheless a dramatic and creative highlights. Also impressive is "Zwolf's Castle" with its modernist orchestral work and ominous choral swells. Electronica play a key role in tracks like "Demoniac Active", in which pulsating beats and dissonant orchestral utters interrupt the thematic development, or "Gerd Escapes", where funky rhythmic grooves support increasing treble tonal colour. "Hell" is probably the biggest electronic highlight given its supporting choral use and stunning development.

Well aware of its popularity among anime music enthusiasts, Norihiko Hibino ensures that the piano is central to many of the soundtrack's most beautiful compositions. The solo piano work in "Loneliness" inspires an almost overwhelming desire to reminisce or cry. There also resonant duets for the instrument with strings in "Despair", "Sasha", and "Nostalgia" and an elaborate piano trio in "Flood and Aftermath". With "Xargin", there is even a wordless vocal and piano piece. The acoustic guitar is also prominent on the soundtrack, including on tracks such as "Immigrant Children", "Still I Have Hope to Live", "Church", and quite a few others. Once again, GEM Impact show much competence using the the instrument and the soloist Shingo Sekiguchi offers sensitive performances. Some of the other emotional highlights come where electronic forces are gently blended with acoustic sounds such as in "Joseph's Bad Dream", "Marek", and "Reason to Live". However, such fusions are also used to contrast warmth and coldness in the more enigmatic "Human or Demoniac" and "Colleagues to the End".

The soundtrack also features a number of vocal themes. They are actually composed by various popular artists in Japan rather than GEM Impact. This adds mainstream appeal, but the vocal themes probably would have been more original and emotional if vocal maestros like Norihiko Hibino and Takahiro Izutani handled them. Shortened versions of GRANRODEO's "Detarame na Zanzou" and Minami Kuribayashi's "Unripe Hero" open each disc with some upbeat rock. At the end of the soundtrack, there are shortened versions of Aki Misato's "Sad Rain" and Kanako Ito's "A Wish for the Star", both sentimental pop themes. There are also three full length themes. "Separating Moment" is an emotional theme featuring Aki's strong vocals and passionate string work. Ito sings two themes in English, the easy-to-hum "Sweet Lies" and, clearly inspired by The Eurythmics, the groovy "DD". Overall, the vocal themes are quite superficial in mood and musicality, so don't really fit the instrumental tracks. They will nevertheless be a big draw for fans of J-Pop so their inclusion makes commercial sense.

Through working as a team, GEM Impact were able to incorporate a wide range of pieces to enhance the drama and emotions of Blassreiter. There is everything from heartrending jazz, moody ambience, action-packed electronica and rock, beautiful small ensemble performances, and accessible pop songs. Indepth analysis of most instrumental pieces reveals most were composed in an efficient yet meticulous manner. The compositions don't require frills to create illusions because their core elements and development are so creative and engaging already. Everything is implemented fantastically too with a combination of instrumental recordings and high quality synthesis. This is a landmark work for GEM Impact and every piece contributes something interesting to the collective experience. This soundtrack will appeal to a wide audience, whether enthusiasts of GEM's past works, those who enjoyed the music in context, or the large audience out there looking for excellent instrumental compositions whatever the medium. A fantastic anime soundtrack and a highly recommended purchase.

Album was composed by Masayoshi Murakami / Mixakissa / Норихико Хибино / Такахиро Изутани and was released on September 10, 2008. Soundtrack consists of 59 tracks tracks with duration over . Album was released by King Records.