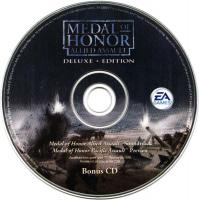 Up until the mid 2000s, most first-person shooter franchises would follow the same path: debut on PC, then at some later stage be ported to a gaming console system. The Medal of Honor series went the other way; after its 1999 debut, the franchise only appeared on home computers in 2002 with its third instalment, Medal of Honor: Allied Assault. Another quality work, the game continued the franchise's winning streak with critics and audiences alike and is still quoted as one of the highlights of the Medal of Honor series.

Still, there's no denying that the selections from all three scores are excellent here. The great, rip-roaring fun of Medal of Honor conveyed by some of the more raucous tracks from that soundtrack presented on this album. Particularly "Panzer Attack" and "The Jet Craft Facility" are stand outs: the first piece through its unrelenting, brutal secondary motif that also befits Allied Assault; the second composition through its dramatic nature that culminates in a jubilant conclusion which heralds the hero's victory over the enemy forces. But Giacchino's score isn't only about the booming sounds of conflict and its well-balance mix of action and atmosphere is reflected aptly through Allied Assault's selection of tracks from Medal of Honor. "Attack on Fort Schmerzen" sports a more subdued stealth atmosphere, which is based on a tense four note woodwind motif that exuded the fear of dangers lurking in the shadows. "Approaching Colditz Castle" represents Medal of Honor's mellower sounds with an opening that features almost an idyllic clarinet solo and noble horns. The material on this cue remains fragmented and brusque string figures maintain a feeling of unease even when the main theme makes itself heard, before the music then ends in nocturnal mystery. "The U-Boat" does a marvellous job at musically painting an image of its location through its oppressive brass chords, whining suspended violins and a slowly rolling melodic idea for the strings. The imminent dread of potentially being buried under the ocean' suffocating weight is heightened further when tolling, foreboding chimes enter the soundscape.

The selections from Underground impressively demonstrate Giacchino's versatility and, while elegantly incorporated into Allied Assault, are in no way a simple rehash of Medal of Honor. "Fleeing the Catacombs" is a splendid example of Giacchino's compositional development: greater changes in dynamics and orchestration than on Medal of Honor, a leaner overall sound, and a richer thematic emphasis. While a cue like "Fleeing the Catacombs" might then lack the sheer punch of let's say "The Radar Train" from Medal of Honor, it makes up for this through its greater sonic variety and lighter sound that gives single instruments more room to breath and climaxes the chance to truly stand out. Giacchino further spices up his compositions through more colourful orchestrations than on Medal of Honor, which manifest themselves through the Mediterranean strains of "Labyrinth of the Minotaur". The other track originally from Underground that dramatically highlights Giacchino's prowess as a composer is "Panzer Blockade". The cue briefly alludes to the menacing, lumbering material from Medal of Honor's "Panzer Attack" — building stylistic and thematic cohesion within the score — before developing its own aggressive four-note brass motif to represent the steel beasts. "Panzer Blockade" also showcases how the two different variations of Underground's new main theme, together with the hero's "resolve" motif, can give insight into the mind and emotions of the game's protagonist. After a yearning quotation of the more intimate "B" variation on solo trumpet against a hammering orchestral backdrop, the music segues into the resolve motif on swelling strings that keep on building. Despite being mercilessly attacked by other instrumental groups, the motif finally erupts into a rendition of the assertive "A" variation, showing how the heroic Manon has overcome her fears and found her will to fight the overwhelming enemy forces.

Allied Assault's music then sees Giacchino combining the increased instrumental and emotional palette of Underground with the large-scale orchestral sounds of the original Medal of Honor. The convergence of influences is clearly heard in the score's new main theme, presented first on the aptly titled "Main Theme". True, there are several elements that make the new main theme foremost sound like an extension of Medal of Honor's main theme. Firstly, there is its obvious sense of Americana and patriotism, which emerges when the theme is first presented on trumpets. Furthermore, the theme's presentation is tinged with the militaristic edge one has come to expect from such straightforward representations of flag-waving national loyalty — snare drums abound. And equally importantly, the theme's general sense of pride and dignity contrasts with the more romantic overtones of Underground's main theme. However, where Allied Assault diverges from Medal of Honor is in other facets of its main theme, which is also a less stern, more flowing musical thought that is quite a bit more expansive than Medal of Honor's main theme, and thus stylistically moves closer to Underground. This is particularly highlighted when the new main theme is developed after 1:10 during a sumptuous passage for the whole string section that holds a near-Brahmsian sheen. While this new main theme may be less immediately memorable than its counterpart on the series' first game, it's arguably more emotional. And one thing that certainly hasn't changed is the fact that Giacchino still knows how to take a melody and satisfyingly develop it over the course of a composition, presenting it in a number of musical disguises that seamlessly segue into each other.

The two action tracks on Allied Assault, "Schmerzen" and "Tiger Tank", highlight this stylistic convergence further. After Underground's lighter, but more colourful action cues, these tracks see Giacchino returning to the more bombastic sounds of Medal of Honor, without giving up on the expanded timbral breadth. "Schmerzen" makes the connection to Medal of Honor particularly explicit through its quotation of one of the sub-motifs "Stopping the V2 Launch" and, though more subtly, of material from "Attack on Fort Schmerzen". "Schmerzen" does come to resemble "Stopping the V2 Launch" quite a bit through the way that the two tracks' shared sub motif is used to propel each composition to ever more frantic heights. The cue then is another superbly rambunctious action track which in its treatment of its sub motif still introduces subtle differences to how the motif was presented and worked through on "Stopping the V2 Launch". Twice, the main theme interrupts the orchestral frenzy to announce victory and particularly its second rendition at the cue's end against a resolute march backdrop is hugely effective. "Tiger Tank" is built on a sub motif of a more march-like character than "Schmerzen" which allows the piece to build up steam from the moment the motif is first presented — creatively so on timpani. The composition maintains its rhythmic focus throughout its running time, while still intermingling its march momentum with the soaring strains of Allied Assault's main theme. At the same time, Giacchino showcases that he may take inspiration from his action material on Medal of Honor, but refuses to simply regurgitate it. This is aptly demonstrated by touches like the occasional ethnic element that tastefully communicate the mission's Mediterranean setting and the enhanced orchestration — witness the cascades of tolling chimes at 2:50.

As reliably rousing as the new main theme and the action material is, the most interesting music on Allied Assault comes courtesy of its quieter moments. "Sniper Town" on first sight might be more ambient-setting music in the mould of Underground's "Streets of Paris", which was one of the weaker cues on that soundtrack. Here though, Giacchino holds the listener's interest more consistently by cranking up the edgyness and harsh nature of the dissonant string textures that carried "Streets of Paris" previously. Combined with snippets of snapping brass and commandingly resonant snare drums and timpani, the more creative string writing on "Sniper Town" constantly keeps the listener on the edge of her seat through means that might be less subtle than its counterpart, but which are considerably more effective. It helps that the composition's coherency is increased through the piece's reliance on yet another sub motif, a lumbering three-note idea that is first presented by bassoons and double basses in their lowest registers and later is played against the violin dissonances. A brief rendition of the main theme contrasts with the surrounding musical eerieness as effectively as during a similar occurrence on Underground's "Among the Dead".

Stylistically even more interesting is "North Africa", which features Giacchino crafting one of his most folkloristically tinged tracks. While Underground had already included Mediterranean sounds on several occasions, the African hand percussion that opens "North Africa" still comes as a most pleasant surprise. And when integrated as creatively as here, these world music elements make for a fascinating addition to the piece. First, the hand percussion is pitted against dark cello tones that announce this cue to be another stealth track. But it soon becomes apparent that — not least through the composition's stomping sub motif — "North Africa" will oscillate between stealth and march sounds that create a constantly overcast, yet spell-binding mood. Marvellously enough, in Giacchino's hands the African hand percussion lends itself equally well to underscoring determination and cautious advancement through enemy territory. One of the most colourful tracks on Allied Assault, "North Africa" particularly benefits from Giacchino's growing orchestrational skills that on this cue result in intoxicating musical textures.

Just to avoid misunderstandings: the below score doesn't reflect the quality of the music, which is consistently stellar. Not only were Giacchino's early Medal of Honor scores some of the first game soundtracks to be performed by a live orchestra, but they also set the bar very high for future orchestral game scores. Thus, based on the quality of the music on this soundtrack itself, the verdict would be quite enthusiastic. It's just that this particular album has become a collector's item, while all of the music on it is readily available on the complete score releases of Medal of Honor and Medal of Honor: Underground, plus there's a separate release just with Allied Assault's new pieces. And given how thematically dense the soundtracks for Medal of Honor and Underground are, they're arguably better represented by their full releases that maintain the album flow and thematic structure of this exceedingly well constructed music. In other words: spare yourself the trouble of finding this album and instead just get the complete releases of the scores presented here.

Only Available With Medal of Honor: Allied Assault Deluxe Edition

Album was composed by Майкл Джаккино and was released on January 22, 2002. Soundtrack consists of 17 tracks tracks with duration over more than hour. Album was released by Electronic Arts. 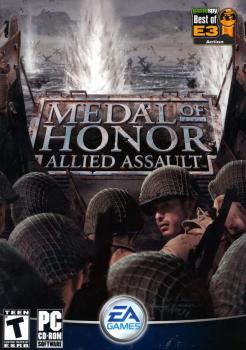