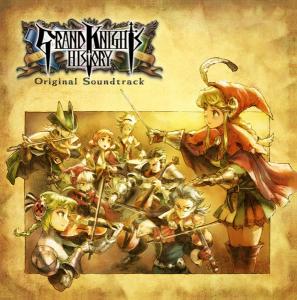 Through their contracts with developer Vanillaware, Basiscape have produced two of their finest collective scores, Odin Sphere and Muramasa. Basiscape handled the score for Vanillaware's latest the game, PSP RPG Grand Knights History, in a slightly different way. This time Mitsuhiro Kaneda served as sound director and lead composer, while the company's famous president Hitoshi Sakimoto took a backseat as sound producer. Through this approach, Basiscape managed to produce a unique and satisfying soundtrack, but once again it is the secondary rather than leading composers that really deliver.

"Opening Theme" and "Theme of the Grand Knights" expose the main theme for the title underwhelmingly. Inspired by Sakimoto's own main themes, the melody is abstract and ambiguous, but reasonably memorable. In the former, it provides the fleeting climax of a fantasy cinematic piece, while on the latter it provides the lead in a tense march. But both tracks shift between sections and harmonic structures rather erratically, meaning that the melody receives little opportunity to define itself. The opening theme, especially, seems lost in a wave of fleeting thoughts and makes little sense out of context. What's more, the implementation of the composition — with a mixture of instrumental performances and sample libraries — only adds to the foggy quality. Though the core aspects of his musicality are intact, it seems that Kaneda tried a little too hard to imitate his mentor on these tracks and the final result is less than the sum of the parts. While Mitsuhiro Kaneda has many strengths, perhaps being a main theme writer is not one of them.

Fortunately, Kaneda was backed up by several individuals who seemed more suited for portraying the sound of Grand Knights History. With its intimate flute solos and silky string backing, Noriyuki Kamikura's "Prelude" soothes listeners following the main themes and Yoshimi Kudo's "Townscape" continues to make an impression with its playful Celtic flavour. The implementation is much more balanced on these tracks and there are no muddy last-gen samples to be found. "March of the Grand Knights" is a more memorable and robust composition than either of the main themes; it achieves an epic sound with its thickening textures and emerging melodies, but still comes together as a cohesive whole thanks to its marching rhythms and fantasy orchestration. "Get Up!!" and "Chance to Victory" get just the right balance with its shifts between epic tutti and personal interludes, and also receive more epic climax arrangements in the second disc of the soundtrack. Masaharu Iwata also makes his finest guest contribution with the rousing military anthem "Swirl of the Flags".

The themes to portray the three unions in the game are each vast in scope, yet contrast in musicality. Noriyuki Kamikura's "Theme of Avalon" is probably the most stereotypical of these, featuring the intimate melodies and small ensembles that have come to characterise fantasy soundtracks. While hardly original, it's intricately composed, beautifully implemented, and rather memorable. In contrast, Yoshimi Kudo's "Theme of Logres" exudes a more dark and militaristic tone. The track shifts between three contrasting sections in a way that is striking but never jarring. Mitsuhiro Kaneda's "Theme of Union" is another track that shifts through several sections in an almost impressionistic manner. Yet none of the sections offer more than a fantasy soundscape and the transitions lack consideration, especially the jarring loop. The trio also composed a set of tracks to characterise their locations — the exotic "Scenery of Logres", and airy "Sight of Avalon", exotic "Scenery of Logres", and martial "Suburbs in Union" — that are each very effective in the game.

With "Fighting Back", Kaneda builds a twist on the conventional RPG battle theme. There are plenty of anthemic melodies and guitar riffs, just like Final Fantasy's great, but surprisingly the fiddle takes the lead here with some Celtic-flavoured figures. There is also plenty of bustle during the development to portray the clash of swords — some might say chaos. Kudo builds on this approach with his battle themes "Assault of Brave Flame" and "Fighting Blade", mixing folksy fiddle parts with blistering guitar solos, while Kamikura's more extravagant "Charge!!" could easily have been taken straight from a new Falcom game. These are certainly some of the most accessible and enjoyable additions to the entire soundtrack. Orchestral compositions such as "Tension" and "Inferior!" nevertheless demonstrate there is some danger to be found in Grand Knights History. Building disorientating polyrhythms through the repetition of minimalist motifs, the latter is one of the most impressive demonstrations of Kaneda's musicality. It won't appeal to all out of context, though.

There are a few other stinkers in the album. The atrocious horn samples of Iwata's "March of Triumph" ensure the final composition sounds irritating rather than victorious, while the subtleties of the subsequent march "The Adventure Begins" are clouded by its more bombastic moments. Meanwhile "Grand Knights of the Tempest" makes a great impact on-screen with its turbulent orchestration, but is a complete turn-off on a stand-alone basis. Moving to the climax of the score, Kamikura's "Exploration of Savage Land" and "Abyss" are spectacular ambient compositions that manage to portray an alien land, while evoking human emotions. Kudo's "Decisive Battle for the Kingdom" is an enpowering anthem that captures the ultimacy of the situation, while including a few suitably light touches, while the final battle theme "King of Chaos" features a reprise of the main theme amidst brutal orchestration. Sadly both ending themes, the reflective "Elegy of the Kingdom" and rousing "Ristia", don't have the intended emotional effect due to the deficiencies of the main theme and its melodramatic treatment.

Sakimoto made an admirable decision by passing the torch on Grand Knights History. This allowed him to focus on his numerous solo projects, while giving an opportunity for Grand Knights History to develop a unique personality. While he's also proved strong in supporting roles, Kaneda absolutely proves here he is not a suitable leading man. He really struggled to produce thematic and stylistic material to define the soundtrack by and his own conflict is evident by the erratic development and implementation of his tracks. Fortunately, the substantial contributions of Kudo and Kamikura — whether lush Celtic soundscapes, rock-orchestral battle anthems, or momentous military marches — ensure that the soundtrack has a unique traditional flavour and plenty of great compositions on offer. Between its disappointing bookends, the Grand Knights History soundtrack proves a worthwhile purchase for fans of fantasy RPG soundtracks. Let us hope that the upcoming Dragon's Crown gives another composer the chance to take the hotseat — perhaps Yoshimi Kudo, Azusa Chiba, or the long-neglected Masaharu Iwata. 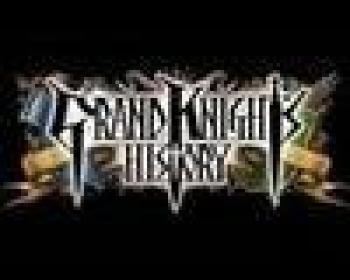