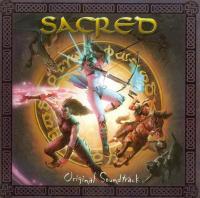 Sacred was a moderately popular action RPG released for PCs in 2004. German composer Dag Winderlich handled the soundtrack for the game and adhered to the 'mature, moody' approach that was becoming commonplace in Western-developed RPGs at the time. Whether cinematic cues, action themes, and ambient soundscapes, everything he offered has a very familiar sound due to the composer's adherence to Hollywood convention. But in the brutal world of Hollywood-style scoring, Winderlich's imitations are mostly consist of the respectable, but inferior, sort.

The opening track of Sacred, "Ancaria's Soul", portrays the epic to unfold with full-blown orchestral and choral elements. On a superficial level, the track is quite awe-inspiring with its echoing barbaric chants and heavy tribal percussion, representing a vast land dominated by brutal creatures. Yet artistically, Winderlich's treatment of the forces is too heavy-handed and clumsy to impress, especially when compared to similarly styled themes from Shore, Soule, and Zur. The composition grows to incorporate some more beautiful soundscapes, but, for contextual reasons, it ends almost as soon as it began and never fulfils its potential. Lacking length and intricacy, the final result certainly doesn't compare to the Hollywood giants it aspires to.

Winderlich builds on these elements in many of the action tracks of the score. Cues such as "Dragon's Flight" and "Voice of the Blade" inspire comparisons with the action cues of The Lord of the Rings and Conan the Barbarian with their percussive drive, furious strings, and choral elements. They provide what the developers were looking for and are quite effective in the heat of the battle, though are ultimately inferior imitations of cinematic conventions. "Hunter and Hunted" is more effective for the way in conveys two sides of a battle — the strength and brutality of the victor, the claustrophobia and fear of the defeated. Winderlich even took the daring step of introducing an electric guitar in "Arachnophobia" and, though it arguably compromises the score artistically, at least it makes it more entertaining.

That said, a substantial portion of the soundtrack has a more subdued, ambient quality to it. Dag Winderlich offers quite an interesting mix of organic and contemporary ones in certain tracks. For example, he mixes some infiltration grooves into "Depths of a Dungeon" and interlaces some rustic guitar work into the beautiful "Dark Forest of Tyr-Fasul" and highly percussive "Crossing the Border". These tracks are quite derivative in their approach, but they do show considerable maturity and represent the scenery well. In terms of implementation, they are convincingly sampled and mixed, though may have benefited from the use of more live performances. Furthermore, the reliance on familiar percussion and groaning samples will be troublesome to many who have heard the sourced libraries before.

At the time of its release in 2004, the Sacred soundtrack was one of the better RPG scores of the 'mature, moody' variety. However, in a time when more artistic and better implemented scores such as Dragon Age: Origins, Risen, or Drakensang: The River of Time are setting the standard, it stumbles. Sacred's soundtrack is largely effective and enjoyable, particularly within the game, but it simply hasn't stood the harsh test of time. Given the soundtrack was available only with certian pre-orders of the game, it is probably no longer worth hunting down anyway.

Only Available With Certain Pre-Orders For The Game
Album was composed by Dag Winderlich and was released on 2004. Soundtrack consists of 17 tracks tracks with duration over about 40 minutes. Album was released by Ascaron.