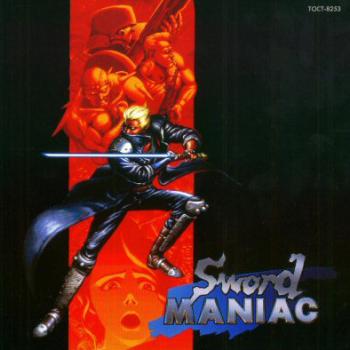 In 1993, Hayato Matsuo and Hitoshi Sakimoto collaborated once again to score the action game Sword Maniac for the SNES. The score was notoriously replaced by a performance by industrial music group Psykosonik for its localised version X-Kaliber 2097. However, their original score was sufficiently popular in Japan to warrant an arranged album. With its funk core and diverse edges, the album has a lot to offer. However, it is likely that many will find it alienated at least on first listen.

In order to appreciate this soundtrack, listening to the arrangements in full is essential. The worth of the arrangements come from thorough development, and pretty much all the soundtrack's other features are secondary to this; during the six minutes of development, memorable melodies are established, contrasting atmospheres are created, and arrangements gain meaning despite having little initial promise. Take the introductory track, "The Shudders," for instance. It is initially dominated by fragmented, dense, and distorted incoherent synth ramblings that overshadow the melody. However, they create a phenomenal amount of tension with their repetition and it's only during the second half of the piece that these passages resolve. As a result, listeners will go from being alienated to enthralled as the track comes together in an unexpected and ingenious way.

At the other end of the spectrum, consider "Mad Buffoon". It initially sounds like a honky-tonk with its repetitive and infantile synthetic piano melodies... that is until synth vocals enter and the track transmogrifies into a ghostly affair. The rest of the track is dominated by the interplay of light and dark passages in a funk style. "Heartless Battle" develops this funk approach even further. The track is dominated by a very catchy rock organ riff that is presented in a range of ways. However, the track is most appealing when a tense secondary sequence is introduced over an ascending chromatic progression. The shifts between these carefree and tense sections — occasionally broken up by pseudo-improvised keyboard passages — sustain interest throughout the track. It ensures that the recapitulation of the initial theme is even more appealing that its exposition.

The other key element to enjoying this soundtrack is having some affinity to the musical styles featured. The old-school synth utilised is deceptive, as this isn't a traditionally styled game soundtrack by any means. Instead it's a funk extravaganza with some progressive rock, electronica, jazz, and symphonic music thrown into the mix. Some tracks, notably "Shadow Devourer," are built from just a repeated bass riff; to get into the groove and enjoy these rhythmically enticing figures, it's necessary to be in a certain state of mind. Other tracks feature tangential development sections and lengthy pseudo-improvised solos. The harmonic basis of "Hunting Beast," for instance, is just a pile of unpredictable drum beats, orch hits, and synth arpeggios that revolve almost exclusively around a single chord. It is made remarkable, however, by a superbly synthesized electric guitar solo that spans around two and a half minutes in total.

Another fascinating and sometimes frustrating aspect of the soundtrack is the way the melodic figures are utilised. In some cases, the melodic basis of pieces is actually very strong, for example in "Heartless Battle". However, melodies are usually utilised as 'heads' — as memorable yet underdeveloped recurring figures before improvisation takes over. "Unlimited Desire" might appear to possess a warm melodic line initially, but doesn't develop as most ears would anticipate; it remains rhythmically static, it repeated almost exactly on several occasions, and is eventually contrasted by a different riff. Hitoshi Sakimoto's approach to lyrical writing is also evident in "The Retribution" and "Iron Jungle; both tracks integrate well-pronounced, rhythmically compelling, and abstractly shaped melodic fragments through unusual means. However, this soundtrack has no overriding melodic material to speak of.

The diversity of the album will be its most endearing feature to casual listeners. Those that enjoyed Hitoshi Sakimoto's soundtracks to the shooter Terra Diver will love "The Retribution"; a classic fusion track, it features the composer's trademark rapid synth arpeggios and portamenti, oppressive percussion use, and punctuated melodic fragments. Hitoshi Sakimoto and Hayato Matsuo also collaborate directly on one track, "Start an Attack!!". A fusion of rock, electronic, and funk styles, this is most intense of the action themes, but ultimately too complex to describe in a way that will do it justice without extending this review another paragraph. The sole symphonic track on the album, "The Brave Fencer," concludes the experience. While completely different to all other entries to the album, it is a fitting epilogue that demonstrates exactly why Hayato Matsuo is one of the most famed orchestrators in the gaming industry.

Sword Maniac's arranged album is bound to alienate many listeners with its unusual stylistic features, heavy synth use, and unpromising introductions. However, most tracks on the album are remarkable once they deveop and the overall album comes together well as a rounded package. It's highly recommended for those most experimental listeners out there with a tolerance for low-quality synth and funk stylings. However, it's likely that many fans of Hitoshi Sakimoto and Hayato Matsuo will find themselves lost here.

Sword Maniac was released as X-Kalibur 2097 in the west, although the western version features a different soundtrack by Psykosonic.
Album was composed by Хаято Мацуо / Хитоси Сакимото and was released on November 24, 1993. Soundtrack consists of 10 tracks tracks with duration over about 50 minutes. Album was released by Toshiba EMI.