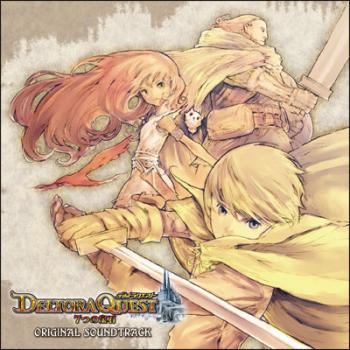 One of the latest Basiscape projects was Deltora Quest: The Seven Jewels, a DS game based on the Australian children's book and Japanese anime series of the same name. It is led by Hitoshi Sakimoto while other compositions are offered by the team of Grim Grimoire and Odin Sphere.

Let's begin with Hitoshi Sakimotos constributions. After his little absence in the aforementioned game scores, his role here is finally a bit more integrated. He does not only provides the main theme, but also composes a few other major themes. "Theme of Deltora Quest" begins on very mysterious notes, but transforms later into a heroic and adventurous march. In my opinion, this is a great theme and better than the main themes of Grim Grimoire or A.S.H. -Archaic Sealed Heat-. The infamous Eminence Symphony Orchestra is also back again with one track to open the soundtrack! After the disappointing "Orchestra Ver." from Odin Sphere (just piano and violin), the group really shines with its performance of the main theme. The track is so gorgeous and rich developed, it's a shame that it is so damn short. I really the transition from the mysterious start to the overblown dramatic passage until the end.

A lot of Sakimoto's tracks remind me of Final Fantasy XII. "Town", for instance, is a nice fresh composition with its harmonious guitar riffs, pizzicato strings, and lead violins. "Tom's Shop" is a quirky little tune, which will inspire recollections of "Rabanastre Downtown" from FFXII. But there are also a few others like "Thaegan the Witch" and "Last Boss", both very evil and climatic compositions that sound like "Esper Battle" in style.

Continuing with Sakimoto, "Leave Your Parents" is one of my favorite tracks. It begins very dramatic like some of Sakimoto's previous tracks, but when the fresh percussion sets in, the track begins to develops very uniquely. I absolutely adore the string and brass duet. Later a female voice and piano are added which gives a nice touch. "Chapter 5: Dread Mountain", is the only location theme (apart from the world map) that Sakimoto contributed. It's very mysterious and climactic, from the harsh piano and string chords to the unique percussion. "Fearful Gnome Tribe" is featuring a rich palette of percussion and is both funny and a little frightening. "The River Queen" sounds very happy-go-luck and its fresh folk style is very ununsual for Sakimoto. "Ending" is a gentle and emotional piano and string duet accompanied by a flute. And the rest of the crew?

Mitsuhiro Kaneda takes this time a lead role in this project, contributing almost every setting theme and the normal and boss battle tracks. "Chapter 1: The Forest of Silence" features very whimsical percussion like many of his compositions. It's well-developed and features a nice palette of different chords and harmonies. "Are You Deceived, by Any Chance?" is a strange track which features the whimsical style again; it lacks heavily on the development side sadly. "Chapter 7: The Valley of the Lost" is another typical track, but much more emotional than the others and pleasant to listen to. With "Tower of Illusions", Kaneda produced a perfect final dungeon theme; it's very climactic and well-composed. The game's battle theme deserves also a special mention as it's very pompous, melodious, and good at balancing different emotions. With this music battling is fun! "During a Boss Battle" features a great bunch of percussion together with brass and other instruments. Again, very fresh sounding.

Kimihiro Abe is also back again and impressed me once again after his glorious work in Odin Sphere. His tone is much more lighter than the previous work. This is shown by tracks like "Jasmine's Mixing Room", "Chapter 3: City of the Rats", "Kin", or "Blacksmith". However, his dramatic and percussive side also shines here with "Hurry, Hurry!" and "Chapter 8: Return to Del". Masaharu Iwata's contributions here are minimal. After his lead role in Odin Sphere and Grim Grimoire, he now composes only three songs — the two Manus' Whistles (solo flutes) and the grand and epic "Big Boss Battle", which reminds me a lot of Odin Sphere. I especially like the pompous brass introduction. And I think its an rendition of the Main Theme in some part. But wait.. there is one more. Yes, Noriyuki Kamikura. He composed almost every little fanfare and jingle, but also contributed the track "Doubtful Mokito's Mansion". Well, the piece doesn't impress me that much, but it's nice to listen to — atmospheric with a touch of roguish and mystery.

Overall, the music is very atmospheric and fits the game's scenery very well. All composers did a good job, especially Hitoshi Sakimoto, who contributed some excellent pieces with different emotions and styles. The same goes for the rest of the sound crew. Some tracks could have been better and more developed, but overall it's very enjoyable and recommended. I hope the next Basiscape projects receive similar treatment like this.