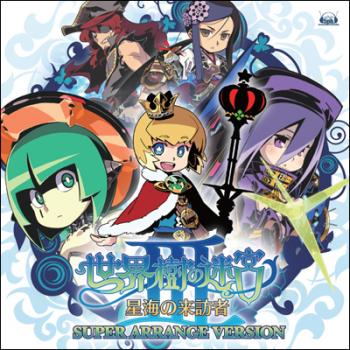 After the absence of a 7th Dragon super arrange album, the announcement of an Etrian Odyssey III arrange album was welcome news. However, unexpectedly, GEM Impact would no longer be in charge of the production for budget reasons. Instead, Hitoshi Sakimoto's team at Basiscape would be handling it. Helmed by Noriyuki Kamikura, who handles the majority of the arrangements, and supported by Yoshimi Kudo, Azusa Chiba, Mitsuhiro Kaneda, and Kimihiro Abe with additional arrangements, it's an arrange album that does so many interesting things. Does it fare better than those arrange albums by GEM Impact and company? You'll just have to read on to find out.

One of the composers that I've started to watch more carefully is Noriyuki Kamikura, considering both his electronic works and orchestrations. Serving as the lead arranger for this project, he manages to surprise me quite a bit. Opening the album with "That's the Beginning of the Adventure," Kamikura takes the very peaceful and dreamy original, and crafts a work of beauty full of saxophone, violin, acoustic guitar, and piano that manages to accentuate the original soundscape. The addition of some ethereal choral work also helps give it a nice calming atmosphere. The violin and piano combination at the end of the arrangement is absolutely heartwrenching. Kamikura really knocked this one out of the park and shows he's capable of an emotional side. With "Town - Sunlight on the Water," Kamikura reinforces the jazzy nature of the original. Exquisite saxophone work and jazzy piano really help craft the basis of the piece while some big band brass and stunning acoustic guitar work really take the arrangement and make it shine. I definitely dig the whole island vibe this one gives off. This is truly an exquisite arrangement and easily one of Kamikura's best to date. It does everything right and nothing wrong. Those who were upset that there might not be any awesome saxophone work due to Hibino's absence can rest easy!

Kamikura's first battle theme arrangement is a medley of the F.O.E. theme and the ocean boss theme and is entitled, "Battlefield - Is That Blood Thine or the Enemy's ~ Unrest - The End of the Raging Waves." The first section, "Battlefield - Is That Blood Thine or the Enemy's" features some intensive percussion work and is synthesizer based. It's an interesting envisioning of the original and one that does manage to capture the basis of it. The percussion is crucial and I think Kamikura nailed it. As the theme progresses, the second theme, "Unrest - The End of the Raging Waves," comes into play and is a synth rock take on the original, a perfect fit! The guitar work is absolutely stunning and helps give it a nice edge. In particular, the solo really manages to deliver and works wonders with the rock riffs and synthesizers in the background. Imagine, if you will, your ultimate idea of nirvana. That is what I picture as I listen to "Battlefield - Those That Slay and Fall." Kamikura, I don't know what demon is inside of you, but please keep him there. I would never, ever imagine combining all the elements you did into this arrangement and actually making it work. Taking the very playful original battle theme, Kamikura transforms it into a sexy masterpiece full of electric guitar, amazing saxophone work, and jazzy piano licks. It is a marvel to behold with an ever changing soundscape that manages to impress me to no end.

"Unrest - Their Own Brand of Justice," is Kamikura doing what he does best: rock with a gothic twist. Just as his arrangement of "Hades Castle" from DeathSmiles Premium Arrange Album managed to absolutely capture my heart, so too does "Unrest - Their Own Brand of Justice." Intense percussion and guitar riffs dominate the arrangement with some slick organ work, some stunning piano accompaniment in the background to really capture the essence of gothic rock, some ethereal choir accompaniment throughout to give it a bit more atmosphere, and of course the amazing lead instrumentation work. Whether it is the absolutely slick electric guitar lead or solos or the piano solos, Kamikura manages to throw in a ton of energy into this mix. This is absolutely how I envisioned the original when I first heard it. I'm glad my wish came true. Kamikura's take on "Labyrinth VI - The Vengeful God in the Dark Ocean Abyss ~ Unrest - Calling That Detestable Name" is truly amazing as well. The first portion, "Labyrinth VI - The Vengeful God in the Dark Ocean Abyss" gives off a suspenseful, futuristic vibe through its use of distorted synthesizer usage, slick beats, and great synth harmonies as well. It manages to retain the dark nature of the original but also manages to spruce up the tempo a bit. The true star, and main component, of the arrangement is clearly the intense "Unrest - Calling That Detestable Name." With an aggressive percussion and guitar riff accompaniment, the original is re-imagined through some slick keyboard work, some awesome synthesizer sections, and aggressive guitar leads. The majority of the piece though, as with the original, does place an emphasis on the keyboards, something I expected would happen, but manages to kick it up a notch or two by distorting it a bit. In addition, there is also a slower take on this theme as it progresses with some beautiful piano work, some fantastic electric guitar work, and some awesome synth distortion. Kamikura really knocked this one out of the park, especially when the electric guitar solo featured has a bit of a blues rock vibe going for it.

Azusa Chiba has always been a favorite of mine since I heard her work on Let's Tap. Since then, she's demonstrated she's excellent at creating Celtic music, exhilarating electronic themes, and beautifully crafted Asian soundscapes. Her arrangement of "Labyrinth I - Waterfall Woodlands," definitely veers more towards the Celtic side of things, but it does so with much more flair. It's an extremely layered theme full of exhilarating percussion work, touching violin melody lines, both in terms of melody and accent, and some acoustic guitar work to add a bit of rustic flair. Throw in some vocal work, presumably by Chiba, since no vocal performer is credited in the album, and you've got a nice fancy mix full of depth. There's a lot going on, but it doesn't sound cluttered at all, at least, not in the sense that it detracts from the overall flow of the music. Chiba's second arrangement closes the album. "Your Adventure Has Ended" is absolutely stunning as well. The pop vibe of the original is maintained through the use of some exotic percussion and piano work that just melts my heart. The acoustic guitar and Chiba's vocal work is also particularly impressive and help lend a nice personal touch to the arrangement. The piano work throughout the arrangement is particularly impressive and really helps the melody stand out. As the arrangement comes closer to ending, violin is thrown in and really helps reinforce this peaceful and tranquil sound with its beauty. This is truly an exquisite way to end the album.

Mitsuhiro Kaneda takes his arrangements in a different direction than some of the other arrangers on the album. Kaneda's approach to "Town - Engrave Thy Name," is to take an orchestral theme and elaborate upon it greatly. The orchestration is more epic, the use of the violin helps give it a bit more tender emotion, and the layering is spectacular. When I had first heard the samples, I was afraid it wouldn't elaborate much on the original theme, similar to some of the old orchestral arrangements on previous arrange albums of the series, but I'm glad I was proved wrong. Kaneda's second arrangement, "Labyrinth V - Chalky Woods," retains the Asian vibe of the original and does so marvelously with a beautiful violin lead, some amazing flute and strings harmonies, and some great piano and percussion work. The most impressive part of this arrangement, however, comes from the absolutely stunning piano solo section. It has a bit of a jazz flair to it, but it really manages to capture the beautiful essence of the Etrian Odyssey series. Overall, Kaneda manages to kickass yet again with his extremely touching take on the original. Abe's sole contribution, "Labyrinth II - Water Woods of the Submarine Ridge," manages to take the mysterious nature of the original and craft an arrangement that accentuates the mystery through the use of some beautiful dual violin lines whose harmonies complement one another greatly, some ethereal accompaniment at times, some beautiful flute work, and some striking brass work that gives a sense of omen. As the theme progresses, the violin work becomes much more frenetic and important to the overall structure of the arrangement. In fact, it helps give it a nice sense of chaos too.

Another up and coming star of the Basiscape team is definitely Yoshimi Kudo. His industrial rock work on the DoDonPachi Dai-Fukkatsu soundtracks is really what defines him in my eyes, so I was quite surprised to see how he handled "Battlefield - The First Campaign." Perhaps as a tribute to Koshiro's former place of work, the image that immediate comes to mind from the opening notes is clearly "Falcom Sound Team JDK." The piercing violin work mixed with a rock backing is definitely their signature sound, however, once the B section kicks in, Kudo takes this theme and makes it all his own. Killer guitar work, amazing violin work, and some flute work give the solo section a nice edge, delicateness, and playfulness. Yoshimi Kudo is full of surprises and this is another one that just managed to take me completely by surprise. Kudo's second arrangement is a medley of the third and fourth labyrinth themes, entitled "Labyrinth III - Cavern of Splendor ~ Labyrinth IV - The Blue Sea Temple of Ritual." Surely, he couldn't surprise me twice, but alas, he does. Opening "Labyrinth III - Cavern of Splendor," with a very tranquil flute led melody with some interesting percussion accompaniment, almost in the form of woodblock sounding chimes, it quickly moves into a nice little funk/rock groove with some fantastic synthesizer and flute work in the melody and guitar riffs a plenty to help give it a nice edge reminiscent of the original. The latter half of the arrangement, "Labyrinth IV - The Blue Sea Temple of Ritual," also has a fantastic rock focus with some awesome percussion work, but the thing that really makes this stand out, in my mind, is the amazing saxophone lead. It helps give the original a bit of smoky sexiness. The piano work that is included from time to time combines with some ethereal woodwind work to create a mysterious atmosphere, particularly when it is used to close the arrangement.

When I first learned that GEM Impact wouldn't be doing this arrange album, I was rather curious as to how it would turn out. Once I found out that my favorite members of Basiscape, sans Manabu Namiki, would be handling the arrange album, my fears were allayed. Although I must admit, I definitely do miss the idea of Emi Evans once again contributing her beautiful voice to the Etrian Odyssey series. Helmed by rising star Noriyuki Kamikura and joined by the other junior members at Basiscape, this arrange album was a chance for the team to feel unbridled freedom when it came to arranging music. They succeeded in crafting an arrange album with a variety of styles that reinforces the original soundtrack quite well. As much as I was sad to learn that GEM Impact wouldn't be handling this one, in an odd way, I'm sort of glad they didn't. They already proved how great they were with the first two and it was clearly time for someone else to handle it. Basiscape stepped forward and proved their worth. In fact, this is easily the best arrange album of the bunch.