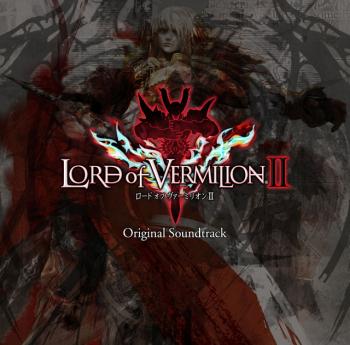 Lord of Vermilion II is Arcade card battling game that has become a considerable hit in Japan. Its predecessor featured a light-hearted instrumental rock score created by Nobuo Uematsu. For the successor Square Enix intended a more epic sound for the game and hired Final Fantasy XII's Hitoshi Sakimoto to take the reigns. Aside a brief nod to the previous score, Sakimoto takes the soundtrack in his own direction and offers his most experimental work in years. With the help of expert arrangers, performers, and engineers, he also ensured it was a high quality one...

Hitoshi Sakimoto bridges the gap between the two games with "Dawn of Vermilion 2 ~Opening Theme~". For the only time on the soundtrack, he reprises Nobuo Uematsu's unforgettable (if overarranged) main theme from the original Lord of Vermilion and uses it to form the basis of a rock-orchestral epic. The rocking elements from the original game are back here and performer Yoshimi Kudo ensures the guitar lines sound more commanding than ever. Nevertheless, Hitoshi Sakimoto is sure to make the theme his own by blending these elements with epic orchestration and exhaustive development. Observant listeners will even find perplexing homages to Vagrant Story's percussive motifs and Gradius V's electronic elements in the resultant hybrids. The final resultant is immensely satisfying and certainly refreshes the franchise musically.

However, the finest moments on the score are those where Hitoshi Sakimoto is able to offer his own focal material. "The Royal Capital Avalan" introduces the courageous central motif of Lord of Vermilion II on brass amidst a sea of piano discords and guitar improvisations. Like Sakimoto's other main themes, it is simple, rasping, and memorable, and, of course, immensely flexible too. It is the latter feature that makes the theme superior to Nobuo Uematsu's, since Sakimoto can arrange it in a range of styles and integrate it subtly into a range of pieces. Its use in "Arcania Ruin", "Aguirre Atoll", and "Ark" is especially effective. In these compositions, the motif is almost used as a finishing touch to make already rich and accomplished pieces all that more impressive. Indeed, these themes really bloom during their three minute development time and are immersely satisfying to listen to.

The majority of the soundtrack is dominated by intense blends of orchestra and rock, but there are some interesting deviations. For instance, "Nord Street" features various Celtic infusions, whereas "Arcania" reflects its setting with Arabian influences. "Toy Box" meanwhile is unlikely anything else heard in a video game with its horrifying mixture of orchestral discords, electronic pulsations, and glockenspiel fragments. The "Name Entry" theme also deserves special mention for its utterly catchy collection of jazzy guitar riffs and piano licks, and is a refreshing deviation from the serious mood of the rest of the soundtrack. The fact many of these compositions were arranged by Basiscape's secondary artists is advantageous in this case; rather than just doing Sakimoto's dirty work for him, these artists were allowed to express their creativity and individuality, resulting in many unique styles and approaches coming through within a cohesive whole.

While the soundtrack is filled with intensity throughout, some cues here really break the sound barrier. "Ark" and "Ragnarok" are the closest Sakimoto comes to imitating the epic orchestral action sound he developed on Final Fantasy XII. However, even these tracks are filled with novelties and benefit from state-of-the-art sampling. The culmination of the soundtrack features a trio of a high-octane action themes. "The Temple at the End of World" takes a leaf out of Falcom's book with its blend of violin melodies and rock accompaniment, but it is so much more gritty and wholesome, while "The Tower of Black Abyss" is filled with the tense brass suspensions and raging guitar chords needed to represent the momentous moments ahead for gamers. Finally, "The Tower of White Flame" is one of several tracks on the soundtrack that features choral components and easily the most climactic track overall in and out of context.

The soundtrack ends with two particularly especially tracks. "Lord of Vermilion II" is the vocal theme of the game and also pushes some boundaries. Yasuko Otsui's voice is utterly beautiful and, like a boy soprano, has that ethereal, abstract quality to it that makes it sound like it has come straight from the heavens. The instrumentals are kept subdued and minimalistic throughout, mainly comprising of elegaic string elements, though a few more obvious pop elements emerge towards the conclusion. Nevertheless, this remains a subtle gem from a composer who only occasionally receives the opportunity to compose for vocals. The album ends with a remix by another Basiscape great, Manabu Namiki. Namiki blends the main theme and several major action tracks into a medley featuring euphoric electronic beats and dazzling guitar solos. It's quite straightforward, but a very enjoyable and uplifting bonus.

The Lord of Vermilion II Original Soundtrack is the first solo work where Hitoshi Sakimoto has really offered something entirely different in a long time. In many ways, it is comparable to his last exploratory work Gradius V in that Sakimoto adapts his characteristic musicality to offer novel fusions (this time rock-orchestral, not electro-acoustic) and represent non-RPG genres (this time a card battler, not a space shooter). The final result might alienate certain fans of Hitoshi Sakimoto's symphonic works and, indeed, those who enjoyed the more accessible Lord of Vermilion. However, it will certainly be delightful for those looking for an unconventional, refined, and, above all else, bold fusion soundtrack.

Track 24 Performed by aRCaNa
Album was composed by Хитоси Сакимото / Нобуо Уэмацу and was released on July 27, 2010. Soundtrack consists of 24 tracks tracks with duration over more than hour. Album was released by Square Enix.