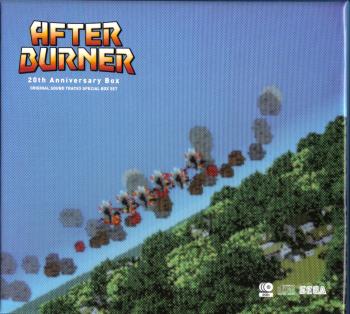 The After Burner series was commemorated at the end of 2007 with another of Wavemaster's box sets. The package has much in common with the OutRun 20th Anniversary Box in that it features a mixture of original scores, ported soundtracks, and arrangements for a high pricetag. However, it essentially revolves around the near-identical soundtracks to After Burner and After Burner II rather than the whole series. While the After Burner Climax soundtrack is included, the After Burner III, After Burner: Black Falcon, and G-LOC soundtracks are strangely not. This merits the question of whether there can possibly be enough included within this six disc set to warrant a purchase. It will very much depend on just how much a person likes the core compositions for the series...

Just like the OutRun series, the majority of the After Burner series' music revolves around a few tracks Hiroshi Kawaguchi wrote for the original After Burner, released back in Arcades during 1987. Featured on the first disc of the box set, the five tunes for this game firmly establish the series' rock-based style and gritty rhythmical focus, though aren't as instantly memorable as some of Sega's other scores. "Maximum Power" works well as a transient title theme, tensely alternating between three suspended chords against rocking drum backing, though is not really suited for out-of-context listening. The chords are reused in a much more liberating way in "Final Take Off" as an ascending progression rather than back-and-forth. Meanwhile there are lots of rapid funk-influenced treble elements to keep things aerial during the 4:28 playtime. However, things don't sound as vibrant as intended due to the dreary low quality samples used, much in contrast to its racing cousin. "Red Out" is an ideal theme for reflecting the endurance of air combat with its harder rock emphasis and dissonant chord sequences, though the more mellow interlude is also welcome. "Super Stripe" meanwhile is one of the most motivating tracks on the album and probably the most catchy too. The title theme is a good rival with its catchy opening chord progression, however, and develops into a particularly anthemic section at 1:14.

The music for After Burner II is probably better known than After Burner. However, the score is practically identical given the game was more of an enhanced version of After Burner rather than a sequel. The compositions have nevertheless been slightly modified to achieve a fuller sound. The synth remains close to the original, but often has a richer sound, particularly in "Red Out". "After Burner" meanwhile attains a brighter sound because it has been modulated up a few tones. Other compositions feature new frills, such as the funk bass riff in "Super Stripe", that make them sound much more complete. Hiroshi Kawaguchi also composed one new piece for this soundtrack, "City 202"; while another short piece, it has much more substance than "Maximum Power" did. While the changes to After Burner II are far from spectacular, they convert a very plain rock score into something much more emotional and memorable. Three of the themes were also given 'Melody Versions' for the game in which the once bass-focused themes are enhanced with more substantial leads. "After Burner" receives an especially impressive transformation with its extravagant keyboard lead and reaffirms its position as the strongest track in the franchise. The changes to "Final Take Off" and "Maximum Power" are comparatively modest, but still welcome. Evidently Kawaguchi transformed a mediocre score into one of the best rock game soundtracks of its time.

In the tradition of other box sets for iconic series, Sega includes the soundtracks for various ported versions of After Burner and After Burner II across discs three to five of the box set. Whether the games themselves are designated After Burner, After Burner II, or After Burner Complete, they generally adapt the After Burner II score and hence feature six tracks each including "City 202". On the third disc, there are PSG and FM sound versions of the Master System soundtrack. The sound quality is massively inferior due to the limitations of the console. The PSG version can be good for revealing the surprisingly lyrical nature of some of the melodies, such as "Super Stripe" and "After Burner". However, the harmonic elements sound very messy in both versions, especially in "Red Out" and "City 202", thereby superficialising the entire compositions. Sunsoft's NES version has more consistent sound quality and is mostly listenable, unlike Tengen's fortunately discarded NES version; however, it inevitably struggles with compositions such as "Final Take Off" that are based on dense chords. The music for the TurboGrafx-16 version is fairly enpowering, though suffers much more from distortion than the other versions. Noriyuki Iwadare's Mega Drive version on the fourth disc is definitely successful, however, and is comparable to some The Revenge of Shinobi tunes in terms of both sound quality and style.

There are whole bunch of more recent and obscure port sound versions also featured in the box set. The Sega 32X version, dubbed After Burner Complete, is one of the closest to the Arcade version and exhibits probably the most rocking spirit of the lot. There is also the sound version for the faithfully replicated version of After Burner II used as a mini-game on Shenmue II, though it offers little to the box set since it is similar to the Arcade version. The early computers X68000 and FM-Towns also receive renditions. While the former is comparable to the better console ports, the FM-Towns version once again makes the most of the computer's pioneering streaming technology. It's been rearranged by Hideya Nagata and Hideki Awata with more elaborate guitar work and various popular influences. There are no actual instrumental recordings, though, and the port could have offered much more. Tracks like the big band-supported "Final Take Off" and the disco-influenced "Super Stripe" sound especially cheesy, but at least they offer some novelty value. Moving to recent portable systems, the Game Boy Advance version makes the most out of its console's sound source, but can only do so much. There are also two mobile versions created for Sega Ages and Sonic Cafe. The latter is definitely better, albeit still modest, and demonstrates the talents of Basiscape's Kimihiro Abe and Azusa Chiba in the mobile department.

Only the second disc provides a refreshing break from the six pieces from After Burner II given it features the progressive soundtrack to After Burner Climax. In series' tradition, Fumio Ito builds the title theme around gritty rhythm guitar riffs, though the riffs are more stylised and resonant than before. The track is dominated by Tomoya Koga's extravagant lead electric guitar work, culminating in an extended solo, while the especially rapid drum beats maintain an aggressive sound. While not particularly catchy, it makes up for it with its technical mastery and emotional moments. Ito offers more dense guitar work and drum kit breakbeats on "Vertical Hot Air" while "Sleepless Sanctuary" works spectacularly in its abstract context with its blend of rock, electronic, and orchestral elements. Keisuke Tsukahara demonstrates his strength as an electronic musician with "The Lure of the Sky", using the overdriven guitar riffs more as a secondary feature to the techno beats, but also offers a catchy rock 'n roll piece with "Great River Valley". Masanori Takeuchi also makes an impact with his fusions, using techno beats and rhythm guitar riffs in an essentially complementary way in the especially striking "Volcanic Islands" and "A Bolt from the Blue". "Clouds of Twilight" meanwhile fuses the anthemic, rock, techno, and breakbeat influences of the soundtrack into one encompassing blend. Hiroshi Kawaguchi's only contribution is a beat-heavy remix of the series' main theme, a welcome reflection on an otherwise modern new direction for the series.

The bonus disc is dominated by arrangements from the S.S.T. Band taken from various releases. There are no less than three different versions of "After Burner". The initial arrangement, derived from Galaxy Force ~ G.S.M. Sega 1, is quite a straightforward synth rock arrangement with an ecstatic keyboard lead, overdriven rhythm guitars, and hard drum beats. The live version from Game Music Festival '90 is a very welcome addition too; it's an extended take on the studio version with much more powerful instrumental performances and solos. "After Burner Version II" from After Burner - S.S.T. Band is probably the most fitting take overall. The introduction is just right with its poppy synth hook and punchy orch hits. The body of the theme also captures plenty of excitement with its charismatic keyboard interpretation of the melody against thrashing guitars. There are also a couple of other S.S.T. Band performances. Taken from After Burner - S.S.T. Band, "Maximum Power ~ Red Out" work surprisingly well together. The title theme transiently sets the pace while dazzling listeners with its keyboard. The rendition of "Red Out" reflects the rhythmical edge of most of the series' tunes with its gritty bass riff. It quickly mellows out, however, with lyrical interpretations of the melody, spacey interludes, and some extravagant supporting guitar work. Finally, the live festival medley is a refreshing hard rock take on the other major pieces from the game with plenty of variety and star instrumentalists during the eight minute playtime.

The bonus disc features a variety of other semi-exclusives too. There is first of all a jingle collection from Rent-A-Hero and Daytona USA that use the opening hook of "After Burner". There are also two versions of "After Burner" created for SGGG and Sky Target featuring rock and techno focuses approaches respectively. The theme make yet another appearance in the penultimate track with an extended version of Hiroshi Kawaguchi's After Burner Climax arrangement. All this thematic repetition is reminiscent of the "Magical Sound Shower" overdose in the OutRun box, but slightly more tolerable. At the very end of the album, there are two remixes from the series by Sega's new band H. Mitsuharu Fukuyama's take on "After Burner" is a little refreshing. The majority of the arrangement features a relatively faithful band interpretation of the piece, though the sound quality and balance is improved from the S.S.T. Band versions. However, the centre of the arrangement breaks into a jam session between pianist and guitarist with a more progressive feel. To note, this arrangement was later featured at the end of the Extra - Official Compilation. Kawaguchi offers his final input to the album with a remixed medley of the After Burner soundtrack. Arguably the very best achievement on the bonus disc, it encompasses the necessary themes, offers plenty of stylistic contrast, and gives a chance for each band member of H. to shine. Exclusives like these will make those who spend thousands of yen on the box set feel a little better.

The After Burner 20th Anniversary Box is intended for the most hardcore of fans and the most obsessive of collectors. For a series built upon six tunes, it's pretty remarkable that the box manages to span six discs. Given just how often these tunes were ported though, the final result is inevitable. While people might find nostalgia in certain ported versions, only the Arcade and FM-Towns offer anything original and most ports are inferior to their source material. After four discs of redundancy, all that is left is the solid but controversial After Burner Climax soundtrack and an impressive collection of bonus arrangements. The music from After Burner III, After Burner: Black Falcon, and G-LOC didn't make it and could have really given the album some much-needed substance. There are enough goodies for the soundtrack to be worth dipping in and out of, but probably not enough for it to warrant a 9800 yen pricetag. It's a really impressive and well done commemoration of the series, but not commercially unviable for the majority out there. Most looking for the originals will be fine sticking with the After Burner Climax Soundtrack instead given it surprisingly compiles both the After Burner Climax and After Burner II original themes.