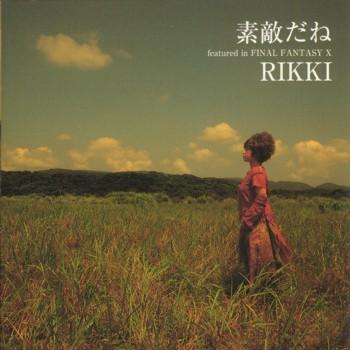 OK, I'm going to start things off with a statement: I hate this album, plain and simple. I can't stand Rikki's voice, and the placement of the vocal track in the game seems... well, wrong. However, putting my own personal bias aside, I hope to give a clear and concise perspective on this album. Of course, I'll have to listen to Rikki all over again in order to do that. Ahhh, the sacrifices we make deciding to review these albums!

"Suteki da Ne" otherwise known as "Isn't it Beautiful" is the vocal track for Final Fantasy X, and is sung by vocalist Rikki. This track certainly isn't the shining star of the vocal tracks to appear so far in the series. Let's start with the obvious. There is no English version of this track, something that I see as a big mistake on Square Enix's part. Although the game was originally designed with the Japanese version in mind, almost every successful RPG to appear in North America that featured a vocal track was given a translation. "Kiss Me Good-Bye," "Passion," and "Melodies of Life" (to name a few) were all translated. While having no translation isn't necessarily a bad thing, I think having that translation gives more meaning to what is being shown on screen; something that Square-Enix has always been conscious of in the past. Having no translation also groups this game in with the may other RPGs to come over from Japan which feature J-Pop vocals in their opening sequences, which have become a joke among reviewers for years (is reminded of X-Play).

But enough of the translation problem, lets look at the track. The instrumentation (as can be heard in the instrumental version of the track, which is included on this album) is nothing spectacular. It's your standard four beat rock/pop ballad, where even the instrumentation seems standard. The violin solo in the middle of the track doesn't make sense, and altogether the instrumentation is easily forgotten. This wouldn't be particularly bad, except that Rikki's voice gives no support. The high-pitched screech of her voice in the upper octaves are particularly hard to listen to, and the way each word is presented (with accents on each syllable) sounds fragmented, and nothing like the smooth vocals a ballad is supposed to have. When you throw all of this together with Tidus and Yuna making out under a lake, you get a full scene that just sounds and looks cheesy. None of the power or emotion seen in the other Final Fantasy titles is present with this track, and it certainly doesn't deserve to be associated with an otherwise high standard game series.

As with every other vocal single to appear with the Final Fantasy series, additional tracks have been included along with the main vocal piece. You would hope that these may round out the album and give it some well needed padding, but instead we're given a travesty that has never been matched in the Final Fantasy series: a vocal rendition of "Aerith's Theme" from Final Fantasy VII. I would imagine fan boys around the world cried tears of blood when their ears were exposed to "Pure Heart." Not only do Rikki's well-below-par-style vocals hurt the theme with almost every phrase sounding louder than it should, but the instrumentation sounds like a Renaissance fair gone bad. All of the beauty of Aerith's theme has been lost: the power, the emotion, the beautiful melodic lines that made her death so emotional for so many fans, have all been steam rolled by a vocalist who thought she had the right to wreck this piece. Even though the score for Final Fantasy VII is far from being my favorite, I still had a lot of respect for "Aerith's Theme," and this vocal rendition makes me very, very sad.

But, this album isn't all bad. The other track on this album, "The Moon ~Utikisama~" is actually quite pretty. The instrumentation is nice, and the piano isn't overpowering. An even larger shock is that I actually don't mind Rikki's lower vocal range — it's just a shame that she only sparingly uses it.

Overall, there isn't a whole lot to like about this album. Unless you're a big fan of Final Fantasy X and can't live without Rikki's vocal piece, I wouldn't suggest picking this album up. Her vocals just aren't up to the standard set by the rest of the series. The vocal capabilities of Faye Wong, Emiko Shiratori, Koda Kumi, and Angela Aki are all incredibly strong from a melodic and technical stand point, which Rikki simply doesn't reach.

With "Suteki da ne" being the third vocal theme from a Final Fantasy game, the publishers behind this single have a good idea of what the fans would like. The singles for "Eyes on Me" and "Melodies of Life" featuring the original theme, its karaoke version, and one new theme. This time, the publishers made a much more valuable experience by introducing two new themes. Rikki certainly has a lot to live up to; with the previous albums being almost flawless in nature, this album would have to be something special.

"Suteki da ne" was perhaps the best vocal ballad released for the series at the time. Rikki's high-pitched folky voice is admittedly an acquired taste compared to the mellow classically-oriented Emiko Shiratori and the confident poppy Faye Wong. However, it suits the Eastern influence Nobuo Uematsu decided for the theme and will be enjoyed by some listeners. The instrumental arrangement from Shiro Hamaguchi is fantastic here. Takahiko Ishikawa starts the track off with a carefully played acoustic guitar that is soon followed by a glorious violin melody. Rikki's voice comes over this singing a subdued fluid melody. The track starts to become more passionate around the 1:40 mark and with this followed soon by a complete violin solo. While I personally preferred the orchestral version featured in the end credits, it's not conventional for these singles to feature such renditions.

"The Moon ~Utikisama~" is an original theme that is solely composed by Rikki. The theme doesn't hold the same amount of instrumental variety as "Suteki da ne" in favour of a simple piano line. The theme is slow-paced and gently developed, exploring Rikki's fascination with The Moon. Towards the end where she starts to howl as she suspends a high pitched note. Although the representation of a werewolf was most likely an unintended effect, I feel that it adds expressiveness to the theme. On the whole, this is a promising track that brings out Rikki's voice pretty well; despite a few pitching issues, she performs it beautifully.

The last song on the album is a pleasing arrangement of "Aerith's Theme" from the Final Fantasy VII Original Soundtrack. Yuji Hasegawa's acoustic guitar, a lightly played acoustic bass, and a violin line introduce the track, instantly giving a Celtic feel. Nonetheless, it proves to be much more of a traditional Japanese theme when Rikki sings the original melody. The acoustic bass becomes a lot more prominent towards the centre of the track when some drums are also added and not surprisingly, the theme becomes a lot more emotive here, too. Rain effects are also added, so it almost gives the impression of Aerith's descent into water. The lyrics are perfectly fitting; the main verse says "The passionate feelings that were beginning to vanish once again sway in radiance in my chest." This track is a beautiful ballad, and as you will see, the words fit right in with the music.

You know the drill. The last track is a rendition of "Suteki da ne" without the vocals. It emphasises the quality of the instrumental arrangement but feels empty without a melody.

On the whole, this album is better than the two that precede it. Rikki's voice may not be everyone's cup of tea, but the instrumentation and the charm behind the melodies really make it a wholesome experience. As the Final Fantasy series progresses, the vocal albums that are released alongside them just get better and better.

"Suteki da ne" is the vocal theme of Final Fantasy X and is sung by Rikki. It is presented in an elaborate vocal single. Normally, we are only treated to one new song on a single, but here Rikki pushes the boat out and gives us two!

"Suteki da ne" is a ballad with a swaying beat, an absolutely fantastic violin solo (which actually differs from the soundtrack version of the song, and in my opinion is far better), and a completely unique vocal talent from Rikki. The vocals she provides are very high-pitched and have a slight nasal effect, which is either good or bad depending on whether you like that or not. Apart from that, it's a magnificent song start to finish.

"The Moon" is a song of Rikki's for piano and vocals. It's very original in its concept and, if you like Rikki's voice, you'll adore this song, especially the heartbreaking chorus parts. It's an extremely timid and sad song, but has elegance to it as well.

"Pure Heart" is the big surprise here. With lyrics penned by Emiko Shiratori, the voice of Final Fantasy IX, Rikki fronts a Celtic version of Final Fantasy VII's "Aerith Theme". Rikki's voice either makes it or ruins it, depending on what you think when she goes ever so slightly off key at times. The rendition for me, however, is a lovely adaptation of the theme. Surely other singles should do this too! To round of the album quite nicely is the instrumental version of "Suteki da ne".

To be fair, this is not going to be to everyone's taste. Rikki's voice is so distinct that, if you don't like it, you'll be driven up the wall. However, if it's for you, then I suggest you snap this single up very quickly indeed!