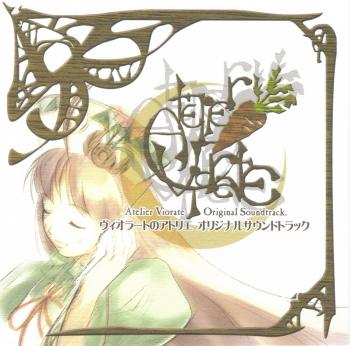 The Atelier Viorate Original Soundtrack is the soundtrack in fifth game in the series. This time it is composed by Ken Nakagawa, Daisuke Achiwa, and Akira Tsuchiya, who now headline most Gust releases. Atelier music has always been pretty pleasant to the ear and this is no exception. The series has had its ups and downs, but it has remained pretty consistent in its recent years. Does this next large set of Atelier tracks live up to the its track record? Certainly.

The album starts off surprisingly with a bang. "Gaze Out Over the Sea" is like no Atelier tune I've ever heard and I'm happy to say that! It does use some instrumentation like flutes and ancient percussion that other Atelier soundtracks have used but the rest is completely new. It features both bagpipes and vocals filled with fast-paced grace notes. The singing is unique and powerful especially in the chorus. Though the bagpipe has been heard before in the series, it hasn't been heard as clearly and as beautifully as this. The result is a very enchanting piece.

This bagpipe melody carries over to "Number One Daughter of Carrot Village". It isn't as powerful a piece, but it's also a nice addition. The bagpipe also carries on to other tunes like in "Harbor of the Great God", "The Rainbow Snake", and "Gothic". Bagpipes and Uilleann pipes really are all over the place, and every track that uses them seems to have gotten extra special attention. I hope you like their distinctive sounds!

There is nevertheless quite a lot of diversity in the soundtrack. It's interesting that, after a track like "Gaze Out Over the Sea" that there would be a techno track like "The Manual for Developing a Perfect Village". I'm really not much of a fan of the random techno, especially after hearing the potential of the more organic tracks. That said, there are some more crazy electronic tracks like "The Afternoon of the Supersonic Hydro Catfish" that sounds almost like it is going to use electric bagpipe in this one. It is just so weird that I kind of like it. There are still some sillier tracks like "Thud" that aren't bad at all, but are veering more towards that filler side. There are also short tracks like the battle completion songs that most would expect from a full soundtrack.

It's amazing how the Atelier series consistently goes so strongly in the musical department. Ken Nakagawa, Daisuke Achiwa, and Akira Tsuchiya debut here as the new Gust Sound Team and they do an even more appealing job before. It's nice to hear a new theme with the bagpipes, though adding one extra instrument won't actually take the series anywhere. What ensures the album at least stands up alongside its predecessors is that there is such a large amount of high quality tracks that there is plenty to choose from. It stands a couple inches above the large RPG crowd and any Atelier music fan will love it.