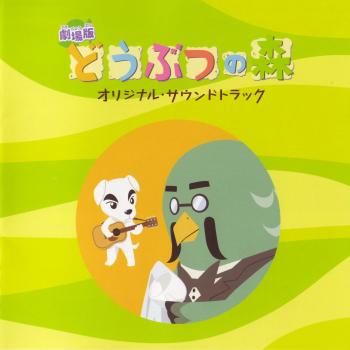 There has been a lack of official Animal Crossing music released as far complete soundtracks are concerned. Previous releases included the DS mini CD (Animal Forest Sound CD Keke Choice Mix) bundled with the magazine Nintendo Dream and two Enterbrain CDs (Animal Forest Totakeke Music) which only contained the songs that Totakeke sings in the Animalese language on Saturday nights. These two Enterbrain CDs were derived from the Nintendo 64 version of Animal Forest (Japanese release only) and then ported to the GameCube version of Animal Forest (USA, Asia, and Europe). Due to this lack of official music, some fans have resorted to making unofficial fan recordings of the game audio.

Recently, in a bizarre marketing move, Nintendo made the decision to make an Animal Forest animated movie. With this decision, there came lots of new tie-in products such as stationery, candy, and toys associated to the film. Another addition was made to produce the Animal Forest The Movie Original Soundtrack. So how does this stack up to the previous releases? Let's explore this new addition to Animal Forest music.

The first track features the ending song of the film and sets the tone for the rest of the CD. It's called "Let's go the forest" and is loosely based on the Animal Crossing: Wild World main theme. Backed by soft strings, guitar, and a nice synthesizer, Taeko Onuki's voice is uplifting and peaceful, gently easing you into the world of Animal Crossing.

"Main Theme", "Arrival!", and "Town Hall" sound similar to their DS versions. "Tanuki Shop" is based on the GameCube version, not the DS version, but seems to be a really twisted rendition of the original version to the point that it's barely recognizable. A Chinese fiddle appears to play the main melody making this almost Asian in nature. The whimsical-sounding "Able Sisters" theme sounds almost identical to the original DS version except for the accompaniment of a low woodwind in the background and clarinet playing the melody more animatedly. "Caught It" does capture this short ditty to a tee and will jog the memory of those who've played the game.

The "Welcome to the Museum" theme is here on CD too. The harp is flowing and rich. There's an accompaniment of a flute which is a nice upgrade from the original version making this something that really could be played over the floor of a museum hall. There's a small use of the triangle or xylophone to merge Celeste's observatory theme and the museum theme together into one track. Resetti's theme is not as caustic and whiny in the DS version. This rendition is made softer using the clarinet taking the place of the sharp braying synthesizer in the DS version. The use of the clarinet and the ethnic instruments in the background makes the theme for an annoying character such as Resetti quite tolerable.

Purists will enjoy Totakeke singing in Animalese as he does in the game. The song he sings is called "K.K. Bossa". This is repeated in different variations. Since everyone in the movie was speaking in Japanese, I was expecting "K.K. Bossa" to be sung to Japanese lyrics — Totakeke even speaks in Japanese to introduce himself. So when Totakeke reverted back to singing in Animalese, I was quite surprised. Nevertheless, it's a really soothing and a nice song all the same. "K.K. Bossa Orchestra ver." features the guitar substituting the main melody and it is probably one of the best tracks on the soundtrack. The string accompaniment is clean, bright, and lulling.

"The Coffee Shop" song starts off with the piano as in the game. Later in the background, the clarinet joins in with the piano with undertones of longing and lamenting, while the strings are distinctly fluid and add so much warmth to this piece. This version really surpasses the original and really captures that feeling of being in a relaxing jazz club. "Tsunekichi's Street Shop" theme (Crazy Redd's theme) is different from the original and sounds almost Arabic-influenced in nature. Whereas the original seemed to have the clarinet or oboe playing the main melody, the movie version has ethnic instruments similar to a sitar playing the main melody. I was taken aback because it was almost unrecognizable and so different. Also, this was so funny to see on film. You can tell that he is really a cheater.

There were also tracks that were composed specifically for the film, such as "Ninja!?? Yuu" and "Where the Star Shines with the Forest". They are fine, but short and not entirely distinct. You'll probably skip these to hear the game-related tracks. The end of the soundtrack (tracks 47 - 51) features some tracks straight from the game itself with no alterations. This is a nice treat.

In closing, the film and its soundtrack are examples of one of the more faithful video game to movie adaptations to date. The film is bright, colorful, and faithful to the source material unlike other video game to film adaptations where the plot is only loosely based on the game. You can find the English subtitled version of the movie on YouTube since there will be no dvd release of this film outside of Japan. The soundtrack mirrors this trend and only adds more to the world of Animal Crossing music, no doubt kicking it up a notch. Most of the game-related tunes have been altered and updated with new orchestrations and strings. These new versions add something more and do not stray too much from the originals. The tracks are somewhat short but this CD does cover most of the major ones.

If you're a fan of Animal Crossing and wanted to have an official CD where you can hear all the core tracks from the DS game, you might want to get this one to add your collection. This is probably the most "complete" of the soundtracks that has been released. Even if you''e not a fan, you might want to give it a listen as an alternate easy-listening CD.

21
Vocals: Totakeke
Album was composed by Kazumi Totaka and was released on December 13, 2006. Soundtrack consists of 51 tracks tracks with duration over more than hour. Album was released by Clay Records.