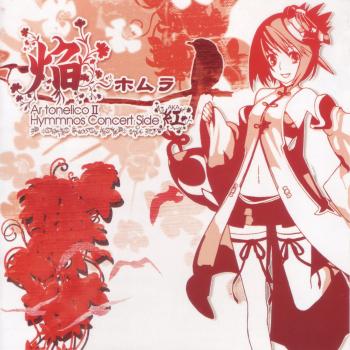 Ar tonelico II Hymmnos Concert Side Red ~Flame Homura~ is one of two vocal albums that accompany the Ar tonelico II ~The Girls' Metafalica That Echoes to the World~ Original Soundtrack. Unlike the Hymmnos albums for the first Ar tonelico, this album places a greater focus on vocal themes and the majority of this album features vocal compositions by the Gust Sound Team and Haruka Shimotsuki. How does this album enhance the original soundtrack, but more importantly, does it succeed in living up to its predecessor?

Unlike the Ar tonelico Hymmnos Concert Side Red ~Tsukikanade~, there is only one instrumental theme. Composed by Daisuke Achiwa, "BASARA" features extensive use of shamisen and shakuhachi to give a very authentic Japanese sound. However, at the same time, the use of the strings gives it a bit of a Wild Arms flair. The melody is much stronger than his efforts on the first red album, and this is actually a great way to open up the release.

Similar to Ar tonelico Hymmnos Concert Side Red ~Tsukikanade~, this album also features a few themes sung and composed by Haruka Shimotsuki and arranged by the Gust Sound Team. "EXEC_VIENA/.," has a bit of playfulness to it, but at the same time, it is a dramatic theme. The musical accompaniment ranges from bombastic percussion to help create a dramatic atmosphere and also more subtle Celtic sections that really help emphasize the playfulness of the theme. These passages are what make the song. The vocals, just like the musical accompaniment, range in style, with more traditional lead vocals during the less bombastic sections and a choral approach to help reinforce the dramatic atmosphere created by the percussion. It's another solid composition by Haruka Shimotsuki, who with the help of Ken Nakagawa, manages to bring vibrancy different from those she sings, but doesn't compose.

Her other composition, "Hartes ciel, melenas walasye," is arranged by Takeshige Inagaki. This theme definitely has a playful air to it. The music is quite solid and has a very Celtic soundscape. The playful percussion, the strings work, accordion, and the clapping all really help cement this. In particular, the instrumental sections that feature the violin and accordion solos are effective in reinforcing the overall direction of the music. The vocals also help to accent the atmosphere of the theme. The vocal direction is that of a more traditional ballad and the layering helps give it some extra flair. Another theme composed and arranged by Akira Tsuchiya, with additional compositional support from Akiko Shikata, is "EXEC_with.METHOD_METAFALICA/." Featuring both Haruka Shimotsuki and Akiko Shikata as the vocalists, it offers an astonishing contrast between the vocalists. Akiko Shikata's voice has a much deeper range, while Haruka Shimotsuki's are usually a bit on the brighter side. It's an effective mix that adds a nice vocal texture to the piece. The music, on the other hand, opens with a Celtic inspired section, full of beautiful woodwind passages. As it progresses, the bridge takes on a more tribal sound, through the effective use of percussion, yet the underlying Celtic influence is still apparent through the use of woodwinds. It's a very diverse theme full of vocal and musical textures. A fine collaboration, if you ask me.

Of course, Haruka Shimotsuki is also the vocalist for a few themes composed solely by the Gust Sound Team. "EXEC_METAFALICA/.," composed by Akira Tsuchiya, opens with some bombastic percussion, some Celtic woodwind soundscapes, and some ambient strings work. These elements combine with the vocals, which take on a more traditional lead, quite nicely to create a beautiful tone. As it progresses, the vocals take on a more choral approach with some ominous bell tolls. However, these only serve as a transition. The remainder of the theme features some ethnic and militaristic percussion, and ambient strings work. The vocals take on a unique layered approach, with some of the vocals with an ethnic vibe and at a much faster tempo, and the more traditional lead vocals heard in the beginning of the theme. The song comes to a close as it opens with a mix of Celtic soundscapes, bombastic percussion, and ominous bell tolls.

Another interesting theme, composed by Takeshige Inagaki, is "EXEC_SOL=FAGE/." Unlike the former theme, this theme has a clear ethnic flavor reminiscent of something you might hear, in the movies, at an Arabian market. The instrumentation is lush and full of atmosphere, mainly thanks to the sitar and the ethnic percussion that accompanies it. The vocals match the music quite well, but at the same time, Shimotsuki's voice is a bit harsh sounding, at least when it takes the lead melody. As a layered choral approach, it's much more tolerable. All in all, it's a pretty good theme with a clear world style and some hit and miss vocal work. Lastly, "FLAME ~ HOMURA, for which the album gets its name, is one of my favorites. The music has the Ken Nakagawa signature sound, through its use of playful percussion, beautiful strings work, accordion, sitar, and piano. The intro to the music, which is reprised throughout the theme, is absolutely stunning and offers the first glimpse into the playful nature of the music. Overall, it's an effective musical theme. The vocals also are on par with the music. The lead vocal line is stunning and the layered accompaniment helps give it an almost ethereal nature as well. I highly recommend this one.

The other vocalist on the album, similar to the previous Hymmnos albums, is Noriko Mitose and all of her music is composed by the Gust Sound Team. Daisuke Achiwa contributes two themes. The first, "EXEC_SPHILIA/.," in contrast to much of the other Gust Sound Team contributions, fuses together both an organic world sound as well as an inorganic industrial soundscape. The music features his signature style, rock, and does so with amazing results. The powerful guitar riffs complement Noriko Mitose's strongest performance on this album. Although most of the composition is used to accompany Mitose's vocals, it manages to convey both beauty and power through its various transitions. The vocal work ranges from a choral-like approach to a more traditional approach and really fits the accompaniment. Perhaps the most stunning portion of the song comes from the guitar solo. During this solo, the raw power and energy of this theme is in full display and the choral accents really highlight the guitar. Overall, a top notch performance by Mitose and an awesome soundscape by Achiwa make for a winner. His other theme, "The Heart Speaks," is a duet between Noriko Mitose and Dahna. Opening with some male operatic vocal work by Dahna, it clearly sets a different tone than most of the tracks, which have, to this point, been entirely comprised of female vocals. The duet between Dahna and Mitose is extremely delicate and complements the music quite well. The music features some minimal acoustic guitar work, some light percussion, and some woodwinds. Overall, the melody is quite effective and the duo of singers works well together. It's another beautiful theme on the album and is a nice contrast to Achiwa's other vocal contribution.

"EXEC_DESPEDIA/.," composed and arranged by Takeshige Inagaki, with some additional arrangement support by JUNK, is one that is truly impressive, especially with the vocal work. Opening with some a capella haunting choral chanting, it quickly moves into a rock oriented piece, much more so than Achiwa's, with the choral chanting continuing. However, as the lead vocals kick in, the music takes on a much more minimalist and creepy approach. The vocal work, like that of "EXEC_SPHILIA/." is another strong point. The entire soundscape is very different than most of the themes on there as it is definitely an industrial rock piece through and through. It really manages to stick out, but I think JUNK may have had a hand behind a lot of the rock influence.

Inagaki's other theme, "EXEC_HARMONIUS_FYUSION/.," has an intro of layered a capella work composed and arranged by Akiko Shikata. Once the instruments kick in, we start the part of the composition arranged by Inagaki. The vocals take on a similar approach to many of the themes sung by Akiko Shikata, even though the vocalist throughout is Noriko Mitose. The music, on the other hand, has an ominous tone throughout. The strings work and organ work is effective in painting a dismal picture. It is a very beautiful theme, despite this. Lastly, to end the album, Eiichiro Yanagi offers "Colors ~ SEN ~ Will This Flower Bloom? For an album closer, this one is quite unexpected. The music and vocal work seem all over the place. For example, the intro features a strings heavy accompaniment with a seemingly chaotic fusion of vocal sounds, similar to those found in EXEC_DESPEDIA/." However, despite all this, I think this song encompasses the overall sound of the entire album. There are more dramatic and chaotic sections, softer musical passages, and a variety of styles featured throughout the album. Overall, it's an effective way to end the album, even if it is a bit unorthodox.

Ar tonelico Hymmnos Concert Side Red ~Tsukikanade~ is definitely not going to be everyone's cup of tea. By that, I mean, those who aren't a fan of Japanese female vocals should definitely stay clear of this one. That being said, for those who enjoy Japanese female vocals, I recommend checking it out, given this album focuses more on vocal themes than its predecessor. However, it's not quite as strong as the Ar tonelico II Hymmnos Concert Side Blue ~Waterway Mio~ vocal themes. The Gust Sound Team, unlike those featured on the complementary album, take a more worldly aspect and are a bit more experimental. The focus on a variety of ethnic soundscapes and the inclusion of some rock help set this one above its predecessor, as both the melodies and atmosphere is pretty engaging. Overall, this is a recommended album, so pick it up if it piques your interest. It is, after all, the complement to the Ar tonelico II Hymmnos Concert Side Blue ~Waterway Mio~ and the Ar tonelico II ~The Girls' Metafalica That Echoes to the World~ Original Soundtrack.