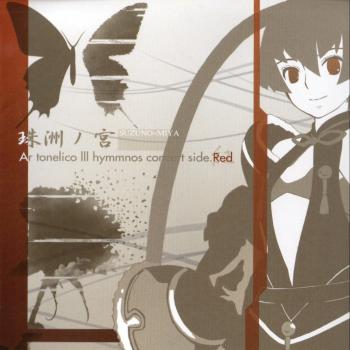 Ar tonelico III Hymmnos Concert Side Red ~SUZUNO=MIYA~ is one of two vocal albums that accompany the Ar tonelico III ~The Girls' Song Which Triggers the End of the World~ Original Soundtrack. Similar to the Hymmnos albums for the second Ar Tonelico, this album places a greater focus on vocal themes, however, the usual Gust Sound Team is practically absent from the vocal compositional role. So, you might be wondering who serves as the composers? Well, surprisingly many people, but those readers may instantly recognize are Kenji Ito, Yoshitaka Hirota, and Haruka Shimotsuki. How does this album enhance the original soundtrack, but more importantly, does it succeed in living up to its predecessor, given the many contributors to this album?

Similar to the complementary Ar tonelico III Hymmnos Concert Side Blue ~SAKIYA=RUMEI~, the Gust Sound Team opens and closes the theme with some instrumental themes, both composed by presumably new member Kazuki Yanagawa. "Grow," the album opener, is very grand in scale. Featuring a blend of bombastic orchestral work, some more ethnic accompaniment, some vocal samples, and some more lighthearted passages, it's an interesting amalgamation of sounds. The album closer, "Glow," opens with some ethereal instrumentation and subtle melodic work. As it progresses, it takes on a different focus, mainly aimed at some playful piano passages, deep bass, and strings work. The additional of some static sound effects gives it an almost nostalgic sound. In the end, the instrumental themes open and close the albums nicely, although I find Ken Nakagawa's "Planet Gene" to be much more effective as a closer.

The first vocal theme, "Weathervane," composed and arranged by Kenji Ito, is absolutely stunning. Azumi Inoue, who has also featured on albums from my favorite Japanese band, Sound Horizon, offers her "motherly" vocals on the album. The music, for a lack of a better word, is gorgeous. The strings and piano accompaniment really accentuate the nurturing nature of Inoue's vocals. However, at times, there is also a rock edge given to the theme. Although nothing exquisite, the guitar riffs help give it a bit more power. As of late, I've really enjoyed Kenji Ito's vocal themes, like those that appear on his Dream Temple and the collaboration album Message, both released in 2008. This is no exception.

Kenji Ito isn't the only notable composer to feature on the album. Yoshitaka Hirota, of Shadow Hearts fame, contributes two themes to the album. "chmod b 111000000/n," featuring vocalist Yayoi Yula, new to the series definitely has the Yoshitaka Hirota experimental sound. Much of the power behind this theme comes from the vocals from Yayoi Yula. They feature a very mystical sound and it accompanies the minimal industrial accompaniment, comprising of percussion and bass, quite well. Some might find this one a bit lacking compared to previous albums, which featured a ton of lush organic instrumentation, but I find the whole futuristic industrial sound a refreshing take for the series.

Hirota's second contribution, "XaaaCi.," is sung by Noriko Mitose and is her only vocal contribution to the album. Similar to his other contribution, this final boss theme is a dark composition with an industrial soundscape. Out of the two themes, this one is clearly much more experimental and also, to those who aren't fans of Hirota's Shadow Hearts work, most likely more off-putting. I, on the other hand, absolutely adore Hirota's more experimental style so I am glad he gets to flex it again — something that rarely happens anymore. The bass work, the industrial effects, and the various vocal layering effects help craft an extremely effective theme, even if it is the exact opposite of the previous Hymmnos albums. Both of Hirota's contributions make me wish the Shadow Hearts series was still alive and well.

A doujin-turned-offiial composer named HIR contributes "METHOD_HYMMELI/." to the soundtrack. Sung by Rekka Katakiri, a new vocalist for the series, it is a powerful theme full of bombastic percussion, powerful vocal work, and some more subtle harp accompaniments. Overall, it's a very exerting theme, but one that does lack some of the more subtle approaches heard in previous themes. The softer instrumental sections, although brief, really contrast nicely. An epic theme for sure, with some interesting futuristic sound effects, but at the same time, it's one that comes off a bit weak at times.

The two themes that are sure to cause the most controversy definitely belong to Maiko Iuchi. The first, "EXEC_CUTYPUMP/.," sung by AU, is very different from any Ar Tonelico Hymmnos theme to date. Featuring a fusion of pulsating techno and rock, coupled with both screaming male vocals and more kawaii female vocals, it is sure to split hairs. I absolutely love it, personally, although the vocals are a bit on the harsh side. Fortunately, the riff accompaniment is catchy as hell and the techno influences, although sparse, make it an interesting fusion. However, the other theme, "EXEC_Z/.," sung by Haruka Togawa, is my favorite on the album. Another fusion piece, this one also combines electronica influences with some rock influences, but there is a greater focus on the bubblier electronica. Couple this with some pretty impressive vocal work, with a more traditional lead vocal and some more choral work, a staple in the Ar Tonelico series, and you have a pretty awesome theme full of energy and catchy to boot

The last three songs, similar to the previous two Red albums, feature Haruka Shimotsuki singing and composing, with arrangements by Dani. The first, "EXEC_FLIP_FUSIONSPHERE/.," is a very beautiful theme that focuses on Shimotsuki's vocals. The instrumentation is more subtle in approach, consisting of organ, some exquisite piano accompaniment, and harp work. The vocal work is as impressive as ever, in particular the layered choral sections. Overall, this is a very impressive theme. Her second theme, "EXEC_ViiBaCi_MjiiRa/.," harbors a more sinister nature. The instrumentation is full of exotic percussion and various other instruments, such as sitar and really helps contribute to the worldly sound of the theme, but it is in the powerful and sinister choral vocals that really make this theme stand out and is one of Haruka Shimotsuki's most impressive themes for the Ar Tonelico series to date.

Lastly, "Song of the Revolving Star," serves as the ballad for this theme and what a beautiful one it is. Haruka Shimotsuki's delicate vocals are coupled with some equally delicate instrumentation. The piano work is absolutely exquisite and really helps the theme keep a delicate air about it, even when it picks up and becomes a bit more pop-like in nature. In the end, it's a fitting theme and another success by Shimotsuki's talent for a strong composition. I'm also particularly fond of this Dani arranger. I wonder what these themes would have sounded like with a Gust Sound Team contributor. I guess we'll never know!

Ar tonelico III Hymmnos Concert Side Red ~SUZUNO=MIYA~ is definitely not going to be everyone's cup of tea. By that, I mean, those who aren't a fan of Japanese female vocals should definitely stay clear of this one. That being said, for those who enjoy Japanese female vocals, I recommend checking it out, given this album focuses more on vocal themes than its predecessor. Unlike the other two albums, this one stands as equal, in my opinion, to the complementary Ar tonelico III Hymmnos Concert Side Blue ~SAKIYA=RUMEI~ album. I think the fact that the Gust Sound Team isn't as heavily involved and the addition of superstars like Kenji Ito and Yoshitaka Hirota really help this album garner a unique identity, even if it is drastically different from previous Hymmnos albums. Throw in the unique compositions from Maiko Iuchi and HIR that offer more modern musical styles and you have a pretty interesting album. Some may disagree with this assessment and want a more traditional Hymmnos album, so in that case, I don't recommend it to those people, but those wanting something new with the Hymmnos albums might want to consider picking this up. I absolutely loved it.

11.
Composed & Arranged by Kazuki Yanagawa
Album was composed by Харука Симоцуки / HIR / Казуки Янагава / Кэндзи Ито / Майко Иути / Yoshitaka Hirota and was released on January 27, 2010. Soundtrack consists of 11 tracks tracks with duration over about 55 minutes. Album was released by Gust.