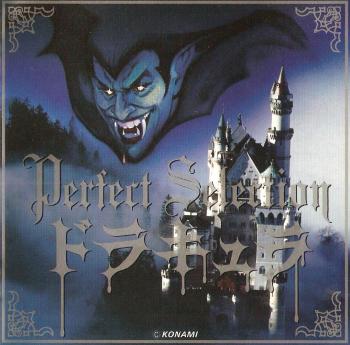 Castlevania is, without a doubt, one of the most beloved and cherished game franchises ever. In addition to being the best of their respective genres, the games have featured some of the most memorable and recognizable tunes in video game music. Numerous tributes have been made for this incredible musical legacy, both official and fan-made, and most of them have captured the essence of the series. Perfect Selection Dracula is an unfortunate exception. Aside from having a misleading and confusing title, the album offers an unexpected treatment to listeners. While most Castlevania albums feature rock or orchestral renditions with a gothic palette, sometimes venturing in progressive territory, this one is way more difficult to categorize. The album is a mix of hip-hop arrangements of classic Castlevania themes (complete with cheesy vocals and lyrics) and some more conservative instrumental arrangements done in different styles. Certain aspects of the album are definitely a call back to the late 80's and early 90's popular music, and despite its unique and charming attempt, the album leaves a lot to be desired.

First of all, let's approach the most controversial aspect of this album: the hip-hop arrangements, which have earned the reputation to the album as "Castlevania Rap". Featuring award-winning lyrics like "I want to suck your blood", "Look into my eyes, I want to take you to the place of the living dead", and my absolute favorite "It's been 100 years since Dracula made his move, he's back, he's ready, he's coming soon", it's easy to see why these arrangements have become so infamous. The vocals that aren't actually "rapping" but are more like "reading the lyrics sheet in a cheesy kind of way". It's easy to see that the songs are silly on purpose, and if you enjoy slapstick humor, you won't find it hard to have a good time with these. That said, they're perhaps not worth paying money for.

"Beginning", "Bloody Tears" and "Vampire Killer" all receive such hip-hop treatment, full with 80's hip-hop groove and beats, synth melodies, and ridiculous vocals. While most would consider these a bastardization of the classics, they are actually meant as a parody, and manage to fill a gap that is almost non-existent in video game culture. What's more, the instrumentation is quite good and the style very unique, representing faithfully the classic themes with a hip-hop makeover. That said, they're such a niche within an already niche area of music that they simply won't appeal to most. The only exception is the hip-hop, rock, and exotic fusion of "Mad Forest" that doesn't feature any lyrics per se, but only some funny "ecstatic" vocal samples.

Fortunately, the rest of the arrangements are completely instrumental and are actually easier to listen to. "Clockwork" keeps the same gothic motifs from the original, but the overall arrangement sounds almost quirky, with a good use of synthetic instruments and an acoustic percussion that is minimalistic at best. A notable section of the arrangement is during the middle, where the drums suddenly kick in and a frantic but brief guitar solo makes an appearance. I am pretty sure that they wanted to scare the listener with this part, since the rest of the track is quiet and laidback, but ultimately it just ends up being a little cheesy and over-the-top. The whole track is slightly derivative, but still catchy and fun to listen, and stands true to the already fantastic original.

"Dwelling of Doom" is yet another synth arrangement, but unlike "Clockwork", it's much more rhythmic, has a more distinct orchestral palette, and features some really cool electric guitar solos. It's very faithful melodically to the original, but manages to captivate the listener due to its unconventional approach. Without a doubt, the most approachable track of the album is "Flash Back", which combines vintage electric guitars and exotic percussion to create a highly melodic and enjoyable theme. The arrangement sounds remarkably similar with 80's rock music and the guitar performance in it is truly excellent. Overall, it's a great "feel good" theme, and my personal favorite from the album.

Still, I am not very fond of the synth used for certain instruments throughout most of the album. While some retain that vintage feel and charm, and undoubtedly the electric guitars are real and sound very good, a big part of the instruments, synths, or samples, certain samples sound really dated and sometimes even awkward. I am not sure if it was an artistic choice or merely the consequence of hardware and budget limitations, but it really is noticeable most of the time. "Demon Seed" is the best example of this, and depending on personal taste, it either benefits from the sound, or it just sounds bad and dated. Featuring synth melodies along with addictive electronic percussion, the track manages to sound like it comes from an infiltration scene from an old 80's action movie. The sound is particularly cheesy, but the track is charming and enjoyable for all these wrong reasons (at least for a much more modern audience).

Ultimately, all these arrangements are divisive and will please very specific tastes. One thing is certain though: They don't sound anything like Castlevania should do... That is, except for "Voyager" and "Prelude". Both feature a synthetic orchestral makeover that does little to deviate from their respective chiptune themes that already were orchestral in intention. While the originals were memorable, the arrangements don't offer much new material and the overall instrumentation feels slightly bland and generic. The overall synthetic sound falls a little flat, and this pseudo-orchestral approach is very off-putting and distracting in the otherwise pop-influenced album.

Perfect Selection Dracula is a mess. Not the absolutely intolerable kind of mess, but still a mess nonetheless. Most of the arrangements are charming and fun to listen, but certain aspects, particularly the hip-hop segments of the album and the dated sound, can be very unpleasant and off-putting for listeners. One should not expect a Castlevania experience from this one, but there is some silliness, "feel good" music, and retro stylings that may appeal for people with an appreciation of certain music. Otherwise, it's very difficult to recommend it to a more mainstream or serious audience.

Chorus & Rap: Wornell Jones & Joey McCoy
Album was composed by Konami Kukeiha Club and was released on September 05, 1991. Soundtrack consists of 10 tracks tracks with duration over about 45 minutes. Album was released by King Records.