Music from Brandish 3: Spirit of Balcan 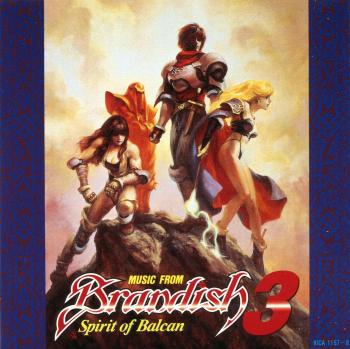 Music from Brandish 3 Spirit of Balcan contains music from the third iteration to the Brandish series. In addition to that, there are a couple fun bonus arrangements and there's twice the amount of music this time. The band arrangements were all done my Tomohiko Kishimoto and the original composers did everything else. How has the music changed over the couple of years between Brandish 2 and Brandish 3?

It's interesting to see the slight evolution over the years. It has all been very similar in style since the beginning, but there is a slight difference in the overall feel to it all. The first game happy a relatively happy and energetic battle atmosphere to its soundtrack while the second game had a bit more of a darker, but still fun, battle tone. Again it's all relative to the games themselves, but the third soundtrack definitely seems to have more of a melancholy feel to it. Just compare the shop theme in this one to the original shop theme. You'd think some on died when listening to this albums shop theme. There are much more slower songs like the shop theme. "Sever Time, Over..." is one of my favorite ones. It conveys that melancholy emotion through the simplicity of a couple instruments.

Another thing that's different is the shear number of themes on this album compared to the last one. Despite the number of pieces, the quality stays the same. Besides these differences, most of the music is very similar to past albums and even the sound quality hasn't changed that much. I'm really not much for the large use of synthesizer sounds that are used and the specific sound that is used is not the most pleasing of synths. For example, "Land of the Rising Sun" sets that tone right away and it just feels a little stuck in its time. The synth works a little better for classic battle styles like "Take Arms", though. Nonetheless, I would pick this one over the previous album.

The end of the first disc excels with the two character themes, "Jinza" and "Umber", which seem to have very full and satisfying compositions. Jinza kind of has a fast paced traditional Japanese nature to it, which I found interesting. "Umber" kind of has that sleazy tavern feel to it which is fun. "Mystic Dora", which is one of the later tracks, also had that feel but a much more catchy melody. It's also a cool remix of the track of the same name from the previous game. I found this to be one of my personal favorites along with "Ares". These highlights just happen to be the four character themes on the album.

At the end of each disc there is a guest appearance by the Falcom J.D.K Band who do a couple rock arrangements of earlier tunes on the album. The "Legend of the Lone Wolves" arrangement doesn't stand out as much as the band's work usually does. This is probably due to the type of synthesizer they used. "Tantoll" sound like a much more classic instrumental rock and roll piece. The final track on the second disc is a great boss medley played by the same band that any fan could enjoy.

Music from Brandish 3 Spirit of Balcan is not too much different in terms of quality compared to its predecessor, but I would consider it a small notch up and the extra band arrangements help shake it up a bit. It has a very old sound for 1995 that I am not partial to, but there are still some strong compositions here and there. The album lies mostly within "fans-only" territory, but that doesn't stop it from having more quality than many other video game albums out there.