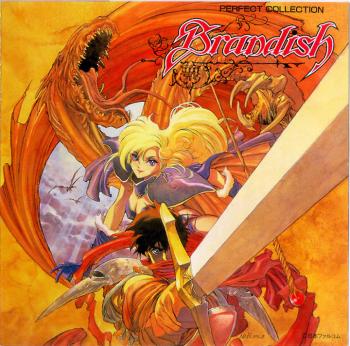 The Brandish Perfect Collection album is something that will get Brandish fans drooling. It consists of special arrangements of Mieko Ishikawa and Atsushi Shirakawa's original Brandish music, along with additional appearances from the J.D.K Electric Orchestra and the J.D.K Band. I think you can already tell that, if you like Brandish music, then this is for you, but what about everyone else?

It all starts with a short guest appearance by the J.D.K Electric Orchestra who do a subtle arrangement of the opening theme. It's a very atmospheric and even more haunting take on the original theme. It my not excel in energy or catchiness, but it doesn't need that and it's very much a highlight of this album. At the end of the album the J.D.K Band also appears and does some very fun arrangements. "Fortress" sounds great when the band plays it though it strays extremely far from the original. It's very fun and funky and the extra horns and catchy guitar riffs help with that. I'm left wanting more of that along with the electric orchestra. "Ending II" is just classic high-energy Brandish style and it's pretty enjoyable too, though it falls into that generic boss battle style at times. Either way it's fun to hear a fun fast paced guitar solo after the rest of the album.

The rest of the album consists of high quality chip tune arrangements and remixes. It almost seems silly to do chip tune arrangements when you have all other options open especially when doing it in 1992. It doesn't make all the arrangements as timeless and they don't have the excuse of being on a limiting video game system for the time. Either way it's a step up from the original music so it's worth listening to. The electric orchestra may have been electronic also, but it was so top notch that I didn't care.

There are nonetheless large variety of instruments used and not just the same old synthesizers like in the actual Brandish games. This helps the album not be too monotonous. For example there are bongos in "Rakshasa" and some kind of saxophones in "Headless". I actually would say that "Headless" is one of the highlights of the chip tunes, though the original being so good helps with that though. There are even some tracks with a different feel stylistically. There is a slight Latin feel to "Crab Devil" and I think it's always fun to hear these tunes be remixed into different genres. Some tracks I would rate equal to their originals. A track like "Ruins" isn't any better than the original; it's just an alternative take. Some may like the bell sounds in the original better and some might like the bagpipe sounds in the new one better. I feel they are very equal in the end. There's certainly nothing wrong with these alternative styles but I think the original music was calling for more.

The original Brandish definitely had some of the better music in the series and that's the core of what makes this album good. There are some vastly different arrangements, and it ends up being on par with the original. The sound quality is only slightly upgraded which helps keep it on par. This is a great album for fans looking for some alternative versions of their favorite Brandish music. I don't think the album will win any hearts over from the non-believers, but either way there are some pleasant remixes.