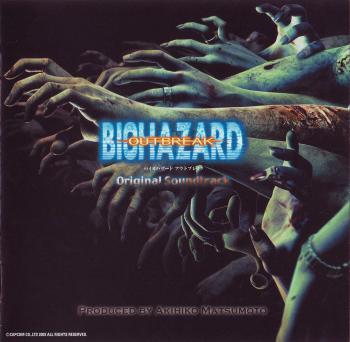 The Biohazard series (known to stateside fans as Resident Evil) has been very successful for Capcom over the years. Biohazard Outbreak adds a new online capability that allows players from around the world to play with or against one another as they journey through the dark, demented and horrifying world that is Raccoon City. Survival horror games, probably more than any other genre, utilize and rely on music to influence the players' emotions, actions. and overall experience. Even with a cast of six composers (Akihiko Matsumoto, Tetsuya Shibata, Etsuko Yoneda, Mitsuhiko Takano, Kento Hasegawa, and Masato Kouda), the Biohazard Outbreak Original Soundtrack does a superb job of setting the tone for this great game.

Opening the soundtrack is the "Biohazard Outbreak Main Title Theme". It bestows a deep, classical impression that's enriched with violins, a piano, and wind instruments. It invokes the reaction that you're either witnessing the aftermath of something horrific or you're about to become apart of something unnerving that is looming on the horizon. Each time I listen to this track, my mind wanders off and recollects the past encounters and confrontations I've overcome when playing the previous games in this series. When an opening theme is able to instill that type of emotion, it has served its purpose; this piece does exactly that extremely well.

You don't expect to hear a lot of upbeat, fast-paced piece in a survival horror game, but "Happy Hour Jam Session" does a nice job of breaking from the norm of the slow, eerie, nightmarish pieces we've become accustomed to. It's a purely rock-based piece and has a distinctly easygoing, laid back feel. Along with the guitars and drums, the organ performance adds to the presentation of the piece by forging a more jazzy emphasis near the end. Once that track has come to a close, you're quickly brought back to reality with "The Plague Cometh". It has that ambient, experimental noise which has become a staple of the series. It's dreary, it's gloomy, it's what Biohazard is all about. Once this piece starts, you know that the taxing and horror-filled adventure is finally underway. "Split Seconds" follows with its aura of crisis and impending danger. The heart-pounding beats and high-pitched sounds inform the player that an approaching danger is drawing nearer and nearer. I really enjoy tracks like this because they are very suspenseful and thrilling.

Like "The Plague Cometh", there are several other pieces that create the same mystic, fearful, ill-hearted emanation. Among them, my favorites include "Into the Unknown", "No Rest for the Wicked", "The Fire Within" and "Of Wisdoms, Truths, and Tyrants". Each of these pieces runs shivers down the spine and aim to keep the player alert at all times. Chilling pianos and violins, loud bangs and rumbles, they all play a major role in this grim, creepy and ghastly ordeal. At any time, danger and disaster may be right around the corner, and these pieces make sure you remember that every step of the way. The battle themes are intensely hard-hitting and pulse-pounding. They immediately snap you out of any emotion you are currently feeling and prepare you for the difficult battle that awaits you. My personal selections include "One Big Mutha", "Despair", "Thanatos is Born"m and "Thanatos Revisited". None of these tracks really do much to differentiate each from one another, but if you enjoy battle themes that are powerful, aggressive, and epic, you'll feel right at home with these.

Furthermore, the composers are highly proficient with taking the main theme of the game and scattering recognizable variations of it throughout the album. Of these variations, the initial three we hear are what I like to call the 'violin variations'. Each uses the violin from the main theme and tailors it in their own discrete ways. The first is "Distant Future", which borrows wind instruments and some of the violin melodies, however, about three quarters through the piece, it begins to break away from the main theme's mold and starts to venture into its own unique style. Next is "The Unpleasant Train". This particular piece, for about a minute, heavily uses the violin from the main theme as well. However, in this case, the violins are fittingly accelerated and brought to the forefront. Once that portion passes, the track becomes totally unique. The violins still play a crucial role, but the percussion hugely amplifies to generate a precise consummation between the two.

"The Waterway of Darkness", the last of the trio of 'violin variations', employs the same arrangement with the violin, but slows it down to a steady pace that is gentle and soft. While the two preceding pieces only use their variations for a short time, "The Waterway of Darkness" uses it pretty much throughout. Two other pieces, "The Big Picture" and "So Many Options", also take elements from the main theme. However, in each, only one instrument is used throughout the entirety of the piece; "The Big Picture" exercises a harp-type instrument and "So Many Options" is strictly a piano solo. All five pieces, although based off of the same source, are performed and arranged in such a way that they don't become repetitive or redundant. Because of that, each piece stands out on its own as a totally new listening pleasure.

Lastly, two pieces that help to bring the soundtrack full circle are "The Extermination" and "The Resident Evil Outbreak ~ Staff Roll". "The Extermination" is a genuine orchestrated piece, and is composed in parts; the first is dominated by thundering percussion and string instruments, while the second is adorned with more string influences and fluid wind instruments. "The Resident Evil Outbreak ~ Staff Roll" mixes pounding percussion, perplexing chants and extremely sophisticated string performances into one complete, mind-blowing work of art. As far as staff roll themes go, it doesn't get much better than this.

The Biohazard Outbreak Original Soundtrack is certainly a great buy for fans of the series and general game music fans alike. Six composers have come together as one to fashion a cornucopia of works that surely has something to please everyone. You won't find a single bad apple in this bunch. Just like online play has added a new dimension to this series, this soundtrack adds a new dimension to the perception of what survival horror game music can be.