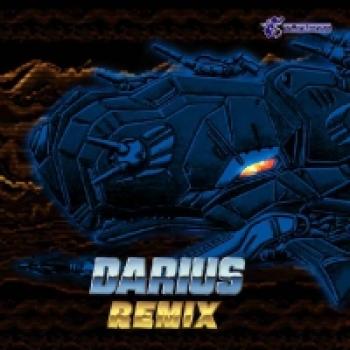 Hisayoshi Ogura is known for his work for the Darius series, Taito's very well-known side-scrolling shooter. His compositions rely little on melody and more on rhythm, for the most part, and in doing so, he was able to create a distinct style all his own, as opposed to the shooter soundtracks for Konami. Many years since the original Darius came out, Darius Remix, arranged by members of Super Sweep and Basiscape, takes a stab at outdoing the Zuntata arrangement, Darius the Omnibus. How well do they succeed, if at all? You'll just have to read on to find out.

Out of the thirteen tracks, all originating from Darius and Darius II, Super Sweep is the more prominent of the two companies arranging on this album with a total of eight. Of the three members contributing to this album, Ayako Saso, Shinji Hosoe, and Takanori Sato, Saso has the most contributions of any single person on the album as well as doing the overall best job. Her track selection is a mixture of some that focus on melody, such as "Captain Neo" from Darius and "Jamming" from Darius II and some that focus more on rhythm, such as "Inorganic Beat" and "Boss Scene 2" from Darius. All of her arrangements lie heavily on the techno side of things. "Captain Neo" is an invigorating arrangement that stays true to the original, but offers a much more gripping experience. "Jamming" is a bit slower in terms of overall pace, but it is also arranged well and seems to carry a bit of a bouncy atmosphere. Both "Boss Scene 2" and "Inorganic Beat" focus on the rhythm more so than the melody. Featuring techno as the main push for the arrangement, both feature some striking accents, such as rock for "Inorganic Beat" and vocals for "Boss Scene 2." Out of Saso's arrangements, I'd have to say that "Captain Neo" is the best one, and is also my favorite on the entire album.

Hosoe, on the other hand, only contributes two arrangements, both from Darius. "Boss Scene 1" is an arrangement that relies on the heavy rhythm of the original. A very pulsating sound, with hints of an industrial feel, dominates this arrangement. While it may not be every person's type of music, I think he did a good job here. "Cosmic Air Way," on the other hand, is much more melodic and definitely has a trancey feel to it. Out of Hosoe's arrangements, this is easily his strongest with its very futuristic atmosphere.

Takanori Sato is definitely the weakest of the Super Sweep team on this album. While his arrangements, both from Darius II, aren't bad, they just don't seem to do as much for me. "Olga Breeze" is nice and is probably the more interesting of the two arrangements. It has a very bubbly sound, features some electronic voiceovers, and includes some nice organic instrumentation, such as piano. My favorite part of this arrangement is that he incorporates the vocals found in the beginning of the original into this arrangement. I can still have my tuna sashimi it seems. "Say PaPa" relies on a very pulsating and rhythmic base line. The melody overtop is fantastic, and in the middle it goes very ambient. It's a nice arrangement, but still not one of my favorites.

On the other hand, the Basiscape side of this album includes five different people, Yushizo Kudo, Kimihiro Abe, Noriyuki Kamikura, Azusa Chiba, and Manabu Namiki, each contributing a single track. Aside from Abe and Namiki, the other arrangements are really not that spectacular. Kudo's arrangement of "Boss Scene 6," from Darius, sounds a lot like the original in terms of sound. Sure, he extends it a bit and adds some organic instrumentation, but there doesn't seem to be too much creativity in this one. "War Oh!" and "Planet Blue," by Kamikura and Chiba, respectively, from Darius II, both have a jazzy sound to them. Kamikura's features some nice saxophone and Chiba features some nice bass guitar, but both are a little on the boring side.

Abe's "Muse Valley," also from Darius II, is a favorite of mine from the Basiscape team. Implementing acoustic guitar and blending it with a futuristic soundscape was a brilliant idea and retains the soft sound of the original as well as the interesting arrangement on the Darius the Omnibus album. Namiki, with my favorite arrangement from Basiscape, gets to do "Boss Scene 7" from Darius. He does a brilliant job as well. His arrangement has a very Asian sound to it, especially in the beginning, through his marvelous use of organic instrumentation. As the track progresses, we move into the futuristic sound heard in the original. While his futuristic sound stays more towards the original sound, I think he implements it very nicely here. It still harbors that sense of danger, but at the same time, respects the original material.

Darius Remix is an excellent arranged album for an excellent series. Both teams bring their best, although Super Sweep clearly dominates here. Aside from the three newer Basiscape members' arrangements, Namiki and Abe clearly show their skills at arranging. Saso and Hosoe, for the Super Sweep team, also do a fantastic job at their arrangements. Sato is middle ground for the album. In the end, this is an arranged album that shouldn't be missed. It offers a nice introduction of the original material for those on the fence about listening to classic shooter music by creating an album infused with organic and futuristic instrumentation. For those who are already familiar with the original material, this arranged album only reinforces the groundwork that Ogura laid out in the early days of the Darius series.