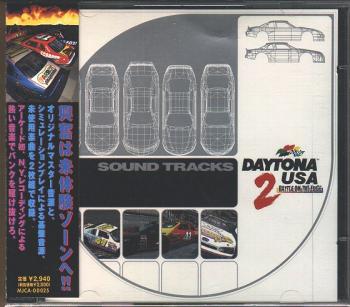 Daytona USA 2 was a follow-up to the massively successful Daytona USA. Given the much-improved hardware, the game was able to offer graphics and audio of much better quality. Aware of the new freedom, sound director Takenobu Mitsuyoshi decided that a much more modern soundtrack would be appropriate and thus largely ditched his quirky vocals and synthy sounds of the original game. He appointed young talent Fumio Ito to create most of the score, though still contributed a piece of his own. The album release actually features three sections, an original sound version, a commentary version, and a bonus disc. Between them, are there enough highlights to go around?

Like the Daytona USA soundtrack, it's the vocal themes that headline this release. The introduction "Battle on the Edge" sounds completely different from the Daytona USA themes with its elaborate vocal work and hard rock backing. The vocals really benefit from the improved sound quality and pronunciation. However, it's with the stage theme "Sling Shot" that the series' charisma is back in full. It's as catchy as any of Daytona USA's vocal themes and features awesome lyrics. However, the track seems much more comfortable in its retro rock style and the well-synthesized instrumentals really complement the vocals. Mitsuyoshi's sole original composition, "I Can Do It", establishes a funk feeling with an intro and solos from a wah-wah electric guitar. The vocals have a more moody attitude in this one, but are as exuberant as ever. Finally, "Skyscraper Sequence" is a much more romantic rock anthem to really get the emotions running in the game. Ito's composition is spot on and Winger really makes the track his own.

The instrumental themes are mainly subsidiary in Daytona USA 2, much like its predecessor. "Tips to Win" is a good display of funk guitar work both from the perspective of composition and technological standpoint. Other jingles such as "Selector", "Name Entry", and "Extra Ending" work flawlessly in context too, but are little more than 30 seconds each here. As for the ending themes, the beginner version seems modestly triumphant, the advanced version utterly ecstatic, and the expert version more soothing. Unfortunately, however, a lot of instrumental themes were rejected from the in-game score and just make it to this soundtrack release. The second disc features four full-length instrumental unused stage themes and they're each very good. The funk-based "U.N." and "Palm Rock Valley" preserve the series' sound, but are so much more elaborate, the latter even featuring some experimental voice-overs. Meanwhile "Tryno Bass No. 173" is a refreshing twist on the jazz format adopted by other scores while "Forest Island" is an atmospheric blend of harmonica and piano.

So exactly how does this release manage to run into two discs? The main reason is that there are three main sections that are partly superfluous. The second half of the first disc is entitled the 'original sound'. It features the music for the game blended with cheesy American commentation and sound effects. While some will find it interesting, most will want to skip this version in favour of the uninterrupted music. In addition to the aforementioned unused tracks, the second disc of the soundtrack features new versions of the vocal theme. It begins with Takenobu Mitsuyoshi's personal renditions of the four vocal themes. Those who missed his quirky Engrish from Daytona USA will be relieved to see it is back at its best here. The album ends with instrumental versions of the four vocal themes for those who want to try to sing along themselves. Bet you can't beat Mitsuyoshi, though.

Musically, the Daytona USA 2 is a worthwhile sequel to its predecessor. The vocal themes maintain the spirit of Mitsuyoshi's classics, but are more lyrically elaborate, convincingly performed, and instrumentally supported. That said, some might not find them sufficiently numerous and many will notice the absence of reprises of themes like "Let's Go Away". The instrumental themes don't offer much, but at least there are a few interesting outtakes. While its implementation is nowhere near as advanced as Daytona USA Circuit Edition released for consoles a year before, it makes the most of what the Arcade had to offer in 1998. The big issue with this album is that it probably didn't deserve two discs. Most probably won't be interested in the game sound version at the second half of the first disc and the second disc is most definitely supplementary. It's a pity a few bonus arrangements weren't included instead. All in all, though, the score to Daytona USA 2 is worth a listen and this album is the best way to do so.

Lyrics:
Ryoichi Hasegawa & Fumio Ito (1.01~1.04, 2.01~2.04)
Album was composed by Fumio Ito / Такэнобу Мицуёси and was released on July 17, 1998. Soundtrack consists of 38 tracks tracks with duration over more than hour. Album was released by Marvelous Entertainment.