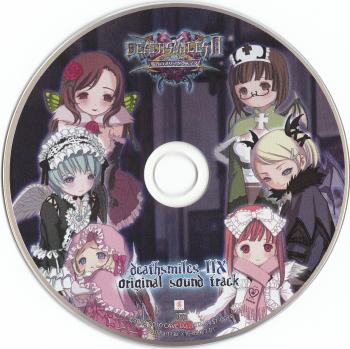 Following the success of the first DeathSmiles game, a second game was created, this time taking place during the Christmas holiday, rather than Halloween. As such, the overall atmosphere of the soundtrack had to change to something more festive. However, would this change affect its listenability? Especially for fans of the original DeathSmiles, such as myself, which I still consider my favorite Manabu Namiki solo soundtrack to date. This time, rather than compose it himself, Manabu Namiki had help from two of his co-workers, Yoshimi Kudo and Noriyuki Kamikura. Their roles differ greatly from Namiki's role on this soundtrack, but how? You'll just have to read on to find out and to see if it lives up to its predecessor!

Given that Manabu Namiki is the primary composer, his role, in my opinion, was to help craft the new sound that was needed to fit the environments of the game. Aside from a few themes, most of his contributions are generally more lighthearted, to help fit in with the Christmas themed game. However, there are a few themes that fit in with the atmosphere provided in the first DeathSmiles. The character select music, "Visitors from Hell," is an ominous organ led composition that fits the origins of the playable characters quite well. As with most character select music for shmups, it doesn't really develop, but it does give off a fantastic atmosphere. Another theme, "Angels' Rest," is pretty much a carbon copy of the stage clear theme from the first game, while "To the Wandering Pure Souls" is in the same vein as the name entry theme from the first game. Speaking of themes being in the same vein as the first game, the game's sole boss theme, "Fragment of Tragedy Blood-soaked With Murderous Intent" is the boss theme from the first game with some added spooky sound effects. It gives off the Halloween vibe, but the spooky vocal effects might be seen as "corny" to sum. The biggest improvement for this theme, in my opinion, was to feature both a synth and an electric guitar solo, combining what served as two different boss themes in the first game.

The rest of Namiki's contributions are the more lighthearted compositions. The opening ~ stage one theme, "On Christmas Eve..." is an excellent way to kick off the stage themes. It features an extremely lighthearted melody, but one that is lush and enticing. Throw in some accompanying sleigh bells and bell tolls and you can already feel the spirit of the holidays in the track. Of course, the first album featured live guitar and this track is no different. It really helps bring a nice edge to the theme and the guitar solo is a pleasant addition and also manages to bring a bit of Christmas sound to it, despite its edginess. The stage two theme, "A Wild Beast Assaulting the Capital," is one of my favorite Namiki themes on the soundtrack. It features an extremely upbeat, bubbly soundscape that further accentuates the holiday spirit. Of course, fans of the original will note the fantastically integrated addition of "Burning Halloween Town," both in terms of some ethereal synth passages and a rockin' guitar solo. Although it's one of the shortest of Namiki's stage themes, I think it's one of the most powerful on this soundtrack.

The stage five theme, "Inside the White Darkness" is an interesting fusion. It's neither Halloween or Christmas, but it is quite the evocative piece of music. A fantastic electronic beat is prominently featured throughout the piece, but I think the true stars of the show are the contrasting vocal samples. For example, the A section of the composition features ominous male chanting that really help bring a more gloomy vibe to the piece, but at the same time, the B section contrasts this entirely with female vocal samples that are quite angelic in nature. It's an extremely successful fusion of atmospheres and one of the truly great themes on the soundtrack. The extra stage theme, "The Kingdom of Unfinished Dreams," is easily Namiki's most playful of the compositions. Opening up with a chiptune fanfare, it quickly evolves into something that, to me, invokes the true meaning of Christmas. I can just imagine the cheer seen on childrens' faces as they open presents or the presence of happy families reuniting for the holidays. The bubbly melody is quite a contrast to much of the soundtrack, and at times, there are some gloomy sections, mainly towards the end, that feature some chaotic laughing and ominous orchestral hits.

Now, if Namiki was responsible, for the most part, for bringing the new sound, Yoshimi Kudo and Noriyuki Kamikura were responsible for transferring the atmosphere of the original soundtrack to this one. Yoshimi Kudo is responsible for two themes. The first of this themes, "Demons at the Abyss," serving as the stage three theme, is quite experimental for a shmup soundtrack. It's a lush orchestral theme with ominous choral chanting, brilliant harmonies, and suspenseful soundscapes. I think this is an experiment that really paid off for Kudo. It shows that he is an extremely competent orchestral composer and that he doesn't need to rely on templates provided by other members of Basiscape. At the same time, it also shows that he's willing to break barriers that are associated with specific music/genre correlations. The second of his contributions is featured at the end of the soundtrack.

Last, but not least, is Noriyuki Kamikura. "A Shadow Wandering the Ruins," the stage four theme, is similar in style to "Waltz for the Aristocrat's Ghost" from the first soundtrack. It's a waltz done in an eerie style, complete with spooky harpsichord passages, haunting and spooky vocal samples, and some fantastic orchestral flourishes. Although it's not as "in your face" as some of the other themes on the soundtrack, it does manage to really grab your attention by providing a nice contrast to the more exhilarating themes heard on the soundtrack. Now, that theme might be underwhelming to some, but I think that Kamikura's second theme, "The Enchanted Palace," serving as the first part to the final stage, is Kamikura's compositional masterpiece to date, at least when it comes to CAVE games. For a quick reference, take "Hades Castle" from the first soundtrack and amplify it. I've stated before that I think Kamikura's greatest strength, from what I've heard so far, is his affinity for music that has a gothic rock style. To drive my point home, "The Enchanted Palace" does everything right, and nothing wrong, in my opinion. Kamikura masterfully layers orchestra, ominous choir, classical piano, and modern electric guitar work into a frenzied ball of energy. The ominous choir and orchestra blend so nicely with the intense piano and electric guitar work. To top it all, he even throws in a bit of "Hades Castle" into the end of the guitar solo, for some continuity between soundtracks. A master work by one of Basiscape's growing composers!

Moving to the end of the soundtrack, the theme for the second part of the final stage, "Elegy for the Fallen Angels," is by far one of the most beautiful things I've heard Manabu Namiki compose. Featuring exquisite organ and harp work, mainly used to blend into the background and combined with some wonderful ethereal synth passages, it really manages to portray a sense of solace. In the end though, the true star of this show is the ethereal, angelic female vocal samples that truly evoke strong emotions within me. For those looking for a comparison, I'd say this is similar to what you might hear in "Sky of Scented Soul" from Mushihimesama Futari, but on a much more refined level. Similar to the first game, the final boss theme features a piece by Johannes Sebastian Bach. However, one of my biggest nitpicks about the first soundtrack was the basic transcription that "Toccata and Fugue in D" received. Fortunately, Yoshimi Kudo takes the theme selected for this game and spruces it up quite a bit. "The Final Decisive Christmas Eve Battle," an arrangement of "Ave Maria," featuring Yuki Watanabe, is a fantastic rendition of it that really fits in with the Christmas themed compositions established by Manabu Namiki. In the end, it's a lush techno arrangement featuring operatic vocals, some rock influence, and some fantastic harmonies. Kudo is a fantastic arranger, in my opinion, and this theme shows that he can even spruce up classical music to something extremely contemporary, much to the chagrin of classical music purists, I'm sure.

There are also three vocal themes featured on the soundtrack. Although none of them are composed by Basiscape, which is normally the case, they are worth checking out. "Christmas Angel," the ending theme for the arcade, composed and sung by Natsuko Naitou, has a very lighthearted feel. There are some beautiful orchestral accompaniments, although they are mainly of a pop nature. I just find it an exquisite theme that really manages to encapsulate the Christmas sound. Whether it be through her angelic vocals, the etherealness heard in the accompaniment, or the traditional Christmas-y instrumentation such as sleigh bells, it manages to strike me as a very successful vocal ending theme. Natsuko Naitou is also responsible for the image song for this game. "*Death X' mailes* AOU version," the theme of the soundtrack that plays at the annual event that usually debuts various CAVE games, is a fast paced electronic theme. This one is quite strange. I really enjoy the music and the singing, but the addition of some vocal samples, presumably by the characters of the game itself, really detract from the overall flow from the soundtrack. Minus this minor gripe, I do think it's quite a nice theme though.

The last vocal theme, used as the ending theme for the Xbox 360 version of the game, "The Special Two," sung by the TOKIOHEIDI Chorus and composed by Tomoko Sasaki, of NiGHTs fame, is another successful vocal theme. Although the singer is a bit more nasally than Natsuko Naitou, I think the overall theme works extremely well. There is such a peaceful delicateness about it and it really manages to capture the sense of the holidays. From the sleigh bell accompaniment, to the exquisite violin passages, to the rock riffs heard on occasion, it really showcases Sasaki's breathtaking ability to create an extremely atmospheric, yet catchy, piece of music. In the end, this is easily the best vocal theme for DeathSmiles IIX, including the theme composed by Yoshino Aoki for the special DLC version of the game's soundtrack.

In the end, I find that the multi-composer approach to this soundtrack brings quite the unique experience to the table. I think that team at Basiscape manages to successfully instill the feeling of Christmas into the soundtrack, while retaining the Halloween essence heard in the original soundtrack. At the same time, I also feel that the vocal themes are some of the best to come out of the CAVE library and definitely succeed in surpassing the ones featured on the first DeathSmiles soundtrack. In the end, this might be hard to acquire, if you didn't order the limited edition of DeathSmiles IIX for the Xbox 360 (Japan region only), but you might be able to find the CD on Yahoo Japan Auctions for a premium. CAVE albums are always hard to acquire, but in my opinion, they are always worth it and this one is no exception.