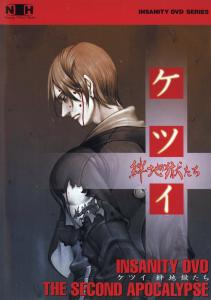 Manabu Namiki followed his spectacular Cave debut on DoDonPachi Dai-Ou-Jou with the score to Ketsui - Cutting the Bonds of Hell. The soundtracks were packaged together in their out-of-print soundtrack releases and complemented each other with their subtle contrasts. The Ketsui soundtrack was especially noted for its cultural and urban influences that came together to create a brief but diverse soundtrack. INH decided to commemorate the game and soundtrack with a DVD-CD box set. The CD features the complete soundtrack to the game, two mobile phone port soundtracks, and a bonus arrangement. The DVD contains 120 minutes of recording of gameplay and there is an additional booklet featuring original game illustrations. Is it worth the expensive pricetag?

Like Namiki's other shooters, Ketsui's score is highly notable for its stage themes. The first stage theme "Interception - Town in Upheaval," for example, is mystical and powerful; initiating with an airy chime melody, a sense of escalation and wonder is created as the gamer rapidly ascends to meet all sorts of interesting foes, enhanced by a wonderfully catchy drum beat. Namiki flaunts a crazy drum line in the majority of his tracks and this force is integral to filling his compositions with life and atmosphere. Perhaps the best stage theme from the Ketsui section is "Evac Industry - Day of Judgment," which is developed wonderfully. Mood is variable and integral to this score. This is exemplified by how the ambient nature of "Suburb - Armored Green" provides a profound contrast to the aggressive electric guitar track "Defensive Line - Lurking in the Darkness". The most unique track is "Canal Fleet - Twilight Armada," melodic ecstasy thanks to its extremely captivating array of synth polyphonies and warped background noises, though it is limited by lack of development.

Like Battle Garegga, Namiki doesn't succeed as admirably with the boss themes as he does the stage themes, utilising the same techniques throughout to the extent that they are collectively a little disappointing. Ketsui's regular boss theme "Darkened" is based on extremely fast-paced drum rhythms and a series of rockin' guitar lines. The true last boss theme "No Remorse" is just as fast-paced as the earlier battle track, but features a more consistent harmonic line. Many of the tracks superbly integrate fragments of the Ketsui main theme, a colourful and frenetic melody introduced in the select theme "Doomsday". The name entry theme "Afterglow" — a slow warped synth variation — is one such example. The short but sweet ending theme also contains fragments of the theme, but it's principally a highlight by the way it reunites the exotic, dazzling, and dreamy aspects of the score with its combination of melodies, beats, and arpeggios.

The remainder of the soundtrack is mainly dedicated to two different sound versions of the soundtrack for N900i and P900i Mobile Phones. Though significantly downgraded, it is impressive how the integrity of the samples is largely retained on such a medium. Given no theme loops, the sound versions each last for about 12 minutes, but this still pads out the release with more material. Unfortunately, it is completely redundant and there is very little reason why anyone would want to listen to these versions. The soundtrack concludes with Manabu Namiki's exclusive arrangement "Ketsui - Howl from Beyond Mix" . It begins with a beautiful urban interpretation of the "Canal Fleet" before abruptly transitioning into a hard industrial take on the "Defensive Line". While it could have been constructed more coherently, this arrangement is diverse and pleasing overall. As a sidenote, the three bonus arrangements on the DoDonPachi Dai-Ou-Jou & Ketsui ~Cutting the Bonds of Hell~ Original Soundtracks. Their inclusion would have made the soundtrack still feel sparing but not completely insufficient in arranged material.

Bonus CD included with the Insanity DVD, The Second Apocolypse: Ketsui, containing the soundtracks for the original arcade release as well as the Mobile-N900i and MobileP900i versions. There is also a single arranged track which features an arrangement of CANAL FLEET and DEFENSIVE LINE. The catalog number for the DVD is INDV-0106.