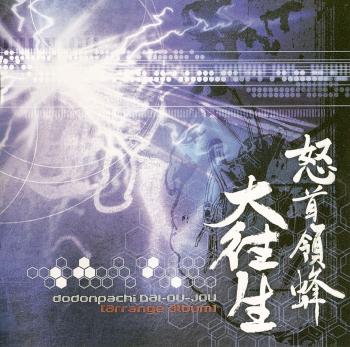 It seems that recently Cave is all about putting out arrange albums from some of their more popular games. Similar to the Ketsui Arrange Album, this album was released as a standalone album during the recent Comiket event in Tokyo. While many of the composers featured on the previous album return, like Ryu Umemoto, Akari Kaida, Yasuhisa Watanabe, and Yuji Takenouchi, this arrange album also features a rather unexpected cast of arrangers, ranging from Motoi Sakuraba, known for his Star Ocean and Valkyrie Profile works, to Kinuyo Yamashita, most famous for her soundtrack to the original Castlevania, and a bunch of familiar and not so familiar composers in between. I was able to snag a copy on Yahoo Japan Auctions. Was my purchase worth all the middleman fees?

The opening theme, "Fog Warning" was arranged by Emerald Dragon's Yasuhiko Fukuda. It opens with a technique heard on the first Drakengard album with some orchestral break action that moves into a deep bass rhythm with some electronic synth samples in the background. As it progresses, the original melody takes the stage, similar to the original sound, and is mixed with some more of that stop/start melody as an accompaniment and is further layered with that deep bass heard in the beginning as well. It's quite an energetic start to the album, but it's not quite finished yet! At one point, the melody starts to really lose tempo, coming almost to a crawl, before rapidly speeding back up and including operatic vocal samples by Yuka Yamagishi. It's a great start to the album! Ryu Umemoto meanwhile returns to arrange another stage clear theme for this album. Entitled "Collector," his take is very electronica focused with some rock influence. As before, I'm quite impressed by Umemoto's ability to take something so short and flesh it out into something that stands strongly on its own. It's an exciting piece of music and I love how it throws in bits and pieces of "East Asia" as well.

Yack is back for the stage themes and, unsurprisingly, he takes "East Asia," the theme for the first stage. Out of his three Cave arrangements thus far, this is easily his best. It's another beautifully thought out arrangement in an electronic format that also throws in some Asian influences as well. There's an awesome synth solo and some more dramatic sections. Overall, it's got great energy, some beautiful layering and harmonies, and truly stands out among Yack's Cave arrangements. Motoaki Furukawa arranges the second stage theme, "Colorful Rainbow." This theme is fantastic, if you ask me. Furukawa can be hit or miss with me, but he really pulled it off this time. It's got a fantastic beat and the fusion of electric guitar in the melody line and the crystalline synth and piano accompaniment really gives it a nice edge. One of my favorite arrangers in the recent year has been Yuji Takenouchi. Having worked on Ketsui's arrange album as well, I had high hopes and they were exceeded. "Strange Dance," the third stage theme, does what I love so much about TECHNOuchi's arrangements. He takes a theme and manages to mellow it out a bit, yet still keep some awesome energy. This theme has some great beats, some interesting piano work, and some great synth samples. The crystalline synth melody is marvelous.

That said, my favorite arrangement on this album is the fourth stage theme, "Mixed Melody". Arranged by an altogether different Konami veteran, Kinuyo Yamashita, it's a very powerful and emotional take on the original that truly matches the title. Although it opens with a beautiful and deep piano line, it quickly moves into a rock based theme, and further into jazzy piano and choir section. Despite these drastic changes in style, everything transitions smoothly. The electronica matches perfectly with the various styles, but the piano that helps give off this Asian vibe is easily the most touching thing about this entire arrangement. It's arrangements like these that really make me wish Kinuyo Yamashita was more active in the VGM scene. She's a fantastic composer who clearly has a penchant for wonderful fusions of sounds and proves to me that she hasn't lost it since composing "Vampire Killer" all those years ago! Hiroki Kikuta, known for his work on Secret of Mana, arranges the last stage theme, "Grieving Womb." Opening rather bizarrely with a cheering stadium, soft, dramatic woodwinds are mixed in subtly before moving into what sounds like it would fit perfectly in Secret of Mana, were it composed using today's sound sources for games. It's got an insanely catchy rhythm full of various electronica samples and while the melody is more on the dramatic side, it really helps contrast things quite nicely. Kikuta hasn't been too active lately when it comes to mainstream projects, and although this still is a bit on the niche side, I find it much better than the eroge games he's composed for as of late. It's a great take on the stage theme. Sure, the opening is a bit bizarre, but the music is quite solid.

One of my favorite boss themes from Manabu Namiki's Cave soundtracks is easily "Burning Body". Taking this theme on is Ridge Racer's Kota Takahashi and what a marvelous job he does. The album opens up with a nice driving percussion rhythm before moving into some heavy metal influences. Now, unlike most people who choose to use rock, he opens with an epic guitar solo, rather than have it serve as a bridge later. However, his arrangement isn't just cookie cutter rock either. The rock dies down at one point and a music box/synth rendition of the boss theme is heard, giving it a stark and pleasant contrast to the heavy rock offerings heard prior. As the theme progresses, the music box/synth melodies combine with the guitar riffs heard in the beginning of the theme. It's absolutely spectacular and a highlight of the album.

Motoi Sakuraba takes on "Yellow Stream," the theme for the last boss. The original version is very suited for orchestra and Sakuraba takes this into consideration. Despite sometimes missing the mark for his orchestral works, I think he really hits the nail on the head this time. Epic choir, dramatic organ, brass, and string work, out of tune violins, and a powerful piano line open up the arrangement, giving a very chaotic nature to the whole piece. As the track progresses a bit, the tempo is quickly hastened. This is the part where the piano truly shines. Chaotic and jazzy, it fits wonderfully with the accompanying strings and brass. It's got such a power to it. It kinda makes me wish he'd use this power more often for his final boss themes in his soundtracks. Overall, this is a fantastic take on the original and I can't wait to see what he does with his next Cave arrangement from Mushihimesama Futari. "Red Bee," the true last boss theme, is arranged by Kota Hoshino, known for his work on the Armored Core series. It's a fantastic take, keeping the tempo of the original, and adding some beautiful drum and bass influences tinged with electronica layering and a rock influence. It's a particularly energetic arrangement, and a great addition to the soundtrack.

Ex-Capcom star Akari Kaida also reprises her arranging role, but tackles the name entry theme, "A Sad Dream." For Kaida, this theme was extremely impressive. I don't often hear her using electric guitar as a main instrument, so that was a pleasant surprise. In addition to that, her fusion of sounds, ranging from R&B and industrial beats, exotic percussion, and rock to synth that emulates the saxophone provides a very smooth and enticing offering. The ending theme, "A Peaceful Death," arranged by NiGHTS' Tomoko Sasaki, also features vocal samples, but no vocalist is credited. The arrangement starts off rather slowly, opting for a soft approach featuring minimal electronic accompaniment with some female vocal samples that provide a beautiful atmosphere to the mix. As it progresses, the arrangement gets more peppy, adding in a more prominent percussion mix and some vocal distortion, which is something I adore, but manages to stay at a level indicative of an ending theme overall. Overall, this is a strong addition to the arrange album and I love all the layering that takes place throughout.

In the end, this was a very solid album that features a nice bit of diversity as well. It's a fantastic edition in this recent arrange album kick that Cave has been going on so any Cave soundtrack lover should definitely try to get this before all the copies dry up on Yahoo Japan Auctions. It's definitely worth it and there were quite some surprising arrangements, mainly by Kinuyo Yamashita, Motoi Sakuraba, Kota Takahashi, and Akari Kaida, as well as more expected, yet still fantastic, arrangements by the more electronica focused composers. This album definitely has me pumped for the forthcoming Mushihimesama Double Arrange Soundtrack, due out towards the end of the year, and I can't wait to see what all the newcomers do with their themes and what all those returning do as well.