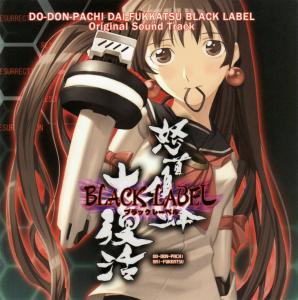 In early 2009, the soundtrack for DoDonPachi Dai-Fukkatsu was released, unfortunately, to mixed reviews. Diehard gaming fans of the series claimed the music, composed by Manabu Namiki, Yoshimi Kudo, and Azusa Chiba, for the most part, was unfitting for the DoDonPachi series, while fans who listen to the music on a standalone basis, such as myself, thought it was a well composed soundtrack. Fast forward a year and the release of the Black Label version of the game. Unlike most Black Label versions of CAVE games, which usually just feature an additional piece of music, for a secret boss or new stage, the DoDonPachi Dai-Fukkatsu Black Label Original Soundtrack features entirely new music, composed by Manabu Namiki, Yoshimi Kudo, Noriyuki Kamikura, and Azusa Chiba. The reason behind this is unknown. Perhaps CAVE was addressing fan complaints or perhaps they wanted to do something different, but the result is spectacular. It's an extremely experimental soundtrack compared to the original White Label version, but also one that fans would find more fitting for the DoDonPachi series. As for me, I couldn't care less. It is kickass music and you'll just have to read on to find why!

Of course, the majority of the soundtrack is composed by Manabu Namiki, though he takes a less prominent role for this version. "Sally (Select)" is similar to something you might hear in the original. The melody is quite strong and the beats are fantastic. It's one of Namiki's best character select themes, rivaled only by "Invitation from Another World" from Death Smiles. "Superb (Stage Clear)" features some nice beats and accompaniment but also throws in some vocal work as well. It's pretty damn catchy! "Factoid (Name Entry)" meanwhile is a more melancholy theme with a bit of a jazz nature and some pretty nice beats as well. It's a pretty nice way to close the soundtrack.

However, Namiki isn't over yet. He does contribute two stage themes as well. "Vertex (Stage 1)" easily dwarfs "Tokyo 2008 A.D." from the original. Interesting enough, the sole vocal sample thrown into this song, "in heaven with you," could pretty much describe my entire feelings for this soundtrack. The track opens up with some more ethereal synth before moving into an intricately layered section full of sharp synths, industrial beats, and other types of synth effects. The melodic section of the theme combines some nice drum beats and spacey synth for a style a bit reminiscent of the original soundtrack, but at the same time, showcasing the overall direction for this soundtrack. "Vertigo (Stage 5)," on the other hand, despite opening up with some distorted guitar work, is probably the one theme on the soundtrack that really captures the feel of the original soundtrack. It features a nice beat that isn't as intrusive as some of the other ones, but the melody is where it is really at. It's a beautiful futuristic synth led melody, but it still manages to pump the listener up.

Azusa Chiba, responsible for "Dividing Road of Fate" and "Who Decided About 'Dying Peacefully'? in the original, returns only for "Xanadu (Stage 2-A)" and its respective B version. The progression of most of these themes features extended openings followed by some short melodic sections. "Xanadu (Stage 2-A)" opens a mixture of funky and ominous soundscapes over top a pretty awesome beat, given it a bit of an industrial flair. The melodic section of the theme compliments the beat well and features some slightly distorted futuristic synths and the theme, overall, quite strong. The section before the loop features some pretty heavy drum usage that loops perfectly into the funky electronica section. "Xanadu (Stage 2-B)," for the most part, is mostly the same, but after the funky electronic section that opens the theme, it transforms into a more industrial theme where the beat drops out at times and the overall atmosphere is a bit more ominous than the original. From here, it proceeds to the same melodic section as the A version of the stage theme. These themes are definitely new ground for Chiba and I think she is definitely growing as an electronic based composer. I hope to see more electronic based compositions and projects in the future for her.

The newcomer to the DoDonPachi Dai-Fukkatsu composition scene is Noriyuki Kamikura and he is also responsible for a few themes. "Flotage (Stage 3-A)" is much more melodic in nature than many of the stage themes present on the soundtrack. It has a fantastic beat and when combined with some great synth melodies and effects, and you have a winner. As it progresses, a pretty interesting synth/electric guitar solo section is added, making it very reminiscent with some of the stage themes for the original soundtrack. The "Flotage (Stage 3-B)" version is very similar as well, but replaces the synth/electric guitar solo in the A version with a more frenetic solo. Kamikura is responsible for two boss themes as well.

Yoshimi Kudo, who was responsible for "Shadowing World" and "Longhena Cantata," in the original, returns with quite a few themes. "Presentiment (Stage 4-A)," is, without a doubt, the best thing on the soundtrack. Similar to "Shadowing World," there is a very industrial feeling throughout the piece. Opening with ominous synths, industrial beats, synth siren accents, it proceeds to continue building. What I find most impressive about this piece, however, comes from the halfway point once the electric guitar comes into the mix. Heavy riffs, distorted synths, distorted vocals, apparently by Kudo himself!, and some kickass guitar work really help make this one an evolved version of the style in "Shadowing World." I truly could listen to this theme all day (trust me, I have...). The "Presentiment (Stage 4-B)" version takes a bit of the ominous nature out of it by adding some frenetic synth work. In fact, it gives it a bit of a heroic air to it, if you ask me. Still, it's quite delicious.

Although "Presentiment" is the only stage theme that Kudo was responsible for, he's also responsible for some of the boss themes for the game alongside Noriyumi Kamikura. Kudo's "Endorphin (Boss 1)" definitely has some Supersweep influences, through the inclusion of certain vocal samples. These combine with a sick industrial beat and some rockin' guitar work for an energetic theme full of various synth effects. It's pretty affective in terms of pumping you up! Noriyuki Kamikura's "Frenzy (Boss 2)" is much more experimental than "Endorphin (Boss 1)." An industrial beat is combined with a variety of vocal samples, such as haunting vocals and "stuttering" vocals. In addition, there are some nice synth sections and some guitar work as well. It's a much more dramatic boss theme than "Endorphin (Boss 1)," but still quite strong.

Kamikura's other boss theme, "Desperado (Final Boss)," opens with "Longhena Cantata" from the original, but quickly moves away from that into a hardcore beat, creating a very intense atmosphere. Once the melodic section of the theme kicks in, which features some fantastic layering and some sick industrial beats, you really feel this sense of danger. Overall, it's a fantastic final boss theme and on par with "Longhena Cantata." Kudo's final theme, "Mercilessness (True Final Boss)," continues in the vein of Namiki's "]-[|/34<#!" (which is leet speak for Hibachi, for those interested in trivia), from the original soundtrack. It features that same pulsating rhythm and guitar riffs from the original, but at the same time, the various layers thrown into the mix and the fact it is also a bit more melodic, make this one a bit easier to listen to than the original.

There are two other themes on the soundtrack as well. The first, composed by Namiki, is "Zatsuza (Secret)." Before the soundtrack, many speculated that this theme would accompany a hidden boss. Well, judging from the music, this is definitely true, although no one has managed to get to this hidden boss yet, at least, not at the time of this writing. Upon listening, those familiar with the original, will immediately recognize the vocal samples as they come from "]-[|/34<#!" from the original. It's an extremely frenetic piece of music with some killer percussion work and practically just noise. I can only imagine how intense this battle is during the game. This one would definitely be tough for most to listen to on a standalone basis. Speaking of samples coming from the original soundtrack, "Resurrection" is a beautiful piano ballad arranged and played by Kimihiro Abe. It's a poignant and sad arrangement of the main theme heard in the White Label version of DoDonPachi Dai-Fukkatsu. It's extremely touching and is the sole link holding this version of the soundtrack and the original version of the soundtrack together.

So, in summary, Namiki and company set forth on a mission to provide an updated take on the original soundtrack. In doing so, they crafted a unique sound that is quite experimental. Many of the stage themes feature extended openings and only half of the song is actually melodically focused. The boss themes are much more experimental in style and the connection to the White Label version of the game, through Abe's arrangement, is quite lovely. In short, I find this soundtrack to be much more energetic and much better than the White Label version, which I also found to be a fantastic addition to the CAVE library of music. I look forward to the upcoming soundtracks for the Xbox 360 ports of Ketsui and DoDonPachi Dai-Ou-Jou, arranged by members of Basiscape, and of course, the original soundtrack to Death Smiles 2, composed by Namiki, Kamikura, and Kudo.