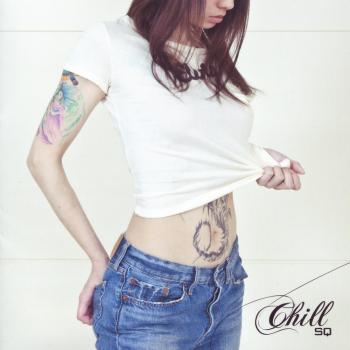 Chill SQ is a relaxation album made for fans of Square's classic game music. It features seven arrangements of fan favourites from the Final Fantasy series, Front Mission, SaGa, Mana, and Live A Live by arrangers such as RE:NDZ, okadada, and Square Enix's own Mitsuto Suzuki. The successor to the commercially successful Love SQ, this album is almost completely dedicated to chillout music and features much less diversity. The result is not a particularly good album, though there are still potentially enjoyable individual arrangements within.

The album opens up with a contemplation on three themes from Kenji Ito's Seiken Densetsu. The simple piano introduction evokes memories of the Mana tree with its spiritual and organic timbre. The arrangement transitions into a dynamic guitar-based interpretation of the overworld theme "Endless Battlefield", while still maintaining the relaxing and acoustic feel. Hidefumi Kenmochi fluidly incorporates orchestral dabs and unobtrusive electronic beats to bring colour to the arrangement, even managing to incorporate the "Requiem" along the way. Though slightly let down by superficial beats, the reprise of the main theme "Rising Sun" helps to tie the various thematic and timbral elements of the arrangement together, before ending on a peaceful and modest note. Square's classic Game Boy music is further tributed three tracks in with an interpretation of SaGa's main theme. In trademark fashion, Mitsuto Suzuki establishes a minimalistic electronic soundscape on the remix by using of all sorts of warm synthpads and chord shifts. Almost treated as a supplementary element, the melody is kept slow and subdued throughout on the treble regions of the piano. Like the preceding arrangement, however, this one still has plenty of emotion and still stimulates the ears while relaxing the mind.

Perhaps the two most surprising additions to the album are the tributes to Front Mission's "Within Living Memory" and Live A Live's "Warm A Live" and "Live Over Again". The former was an ingenious choice of arrangement, since the original is so beautiful despite its obscurity. okadada's arrangement almost adheres to every note of the original, gently reverberating between chord sequences before eventually introducing the main melody. Nevertheless, there are major changes in instrumentation and, instead of the SPC chip, listeners can enjoy more chillout beats and piano lines. The electronic backing grows much more elaborate over the course of the arrangement, which has a stimulating yet rarely overbearing effect. Though the conclusion of the arrangement is ultimately superficial and unfulfilling, the prior build-up is spot on. Familiar synthpads and beats also make their way into RE:NDZ's interpretation of Live A Live. The resultant arrangement is once again elegantly implemented and highly relaxing. However, it's a little bit disappointing that Square Enix didn't aspire to capture the worldly colour of Live A Live, since the album sometimes sounds homogenous due to its similarly styled arrangement.

The most obnoxious addition to the album is Final Fantasy VI's "Aria di Mezzo Carattere". Pop producer Q;indivi rejects the grand operatic influence of the original in favour of a tacky house sound. The opening bars have all the makings of manufactured chillout music, with an awkward interplay of solo piano fragments and electronic overtones. The arrangement particularly abominable with the subsequent introduction of the vocals. The meek and uninspiring vocalist overly exposes terrible lyrics such as "The promises of perennial love, yet sing here in my heart" with her pseudo-American pronunciations. Furthermore, the melody simply sounds contrived in a pop context and lacks the integrity it had an operatic aria. But perhaps the biggest killers are the fast-paced dance beats featured from the one minute mark; these don't have the elating effect that were intended and instead disorientate and repulse listeners. Flawed in concept, arrangement, and performance, this stinker lets down an otherwise serviceable album and should be avoided at all costs.

The album is rounded off by arrangements of two other central love themes from Final Fantasy's Super Nintendo scores. Uyama Hiroto's "Theme of Love" opens with an extended piano solo that has all the intricacy and emotion the Final Fantasy IV Piano Collections version was missing. While the piece could have stood up as a solo piano work, eventually other elements enter such as electronic beats and faux Celtic instruments. Unfortunately, this is largely to the detriment of the original, since the sampling and mixing of the arrangement is often weak. Beautiful passages such as the elegaic string and piano interplay at 2:20 are superficialised by generic drum beats and blatantly synthesised woodwind ululations. With improved implementation, this would have been an excellent addition. Final Fantasy V's "Dear Friends" blends the acoustic guitar focus featured earlier in the album with soft resonant synthpads and a beautiful violin lead. This arrangement reflects the depth of Nobuo Uematsu's original more than any of its other interpretations — achieving a heartwarming and comforting sound while still incorporating worldly references and dark nuances. It's especially fulfilling how the final minutes of the track evolve into a violin duet, as if to represent the close companionship of dear friends.

Chill SQ emphasises once again that Square Enix's current record producers are unable to produce a fulfilling overall album. While the initial concept is good, it wasn't fully expanded on, since there are only seven arrangements altogether and a lot of them are similar 'synth and piano' affairs. What was offered depended very much on the skills and equipment of the arranger, which difffer wildly. While some arrangements such as SaGa are clearly mature and deep, others such as Final Fantasy VI are completely shallow and derivative. Few fans are therefore likely to like the whole album and thus it might be best to avoid purchasing a physical copy. However, those willing to use iTunes can easily sample the arrangements here and find several favouritres that might make it to their playlists.