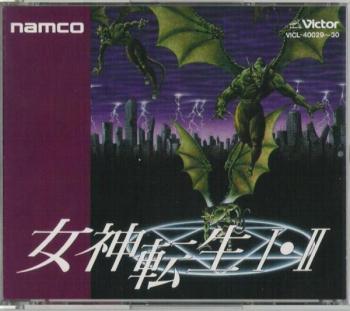 Megami Tensei I & II is a joint original score and arranged album that commemorates the earliest titles in the Megami Tensei series, Digital Devil Story: Megami Tensei and Digital Devil Story: Megami Tensei II, developed by Namco and published by Atlus in Japan for the Famicom (aka Nintendo Entertainment System). The first disc features Tsukasa Masuko's original score for the titles and sees him attempt to establish the series' now well-characterised musical identity. All the music is there, although Victor Entertainment abruptly cuts rather than fades out pieces at seemingly random points. The second disc expands on the original material with a mostly rock-based arranged album created by the mastermind of Falcom's Perfect Collection series, Ryo Yonemitsu. Let's take a closer look at what the album has to offer...

One shouldn't expect too much from the Megami Tensei soundtrack featured at the end of the first disc. After all, it was made in 1987 when the Famicom sound chip was only capable of producing very humble sounds and most composers weren't elaborate or experimental. Much of the soundtrack is surprisingly light-hearted for the Megami Tensei series and it's clear that the series was still struggling to find its identity. Silly jingles such as "Micom" and "Vien" seem more suited for a light-hearted game such as Mega Man than a relatively serious demon-infested dungeon crawler such as Digital Devil Story: Megami Tensei. However, there are still hints of darkness created with the moody, slightly Gothic, chord progressions of pieces such as "Daedalus" and "Marsluka". Furthermore, the trademark rock influence of the series was introduced in the otherwise mediocre action themes "Battlefield", "Anfini", and "Last Battle". Though it lacks individuality and refinement, Megami Tensei is still a sufficient score for its time and will be a decent stand-alone listen for chiptune fanatics.

Present at the start of the first disc, the Digital Devil Story: Megami Tensei II soundtrack is a fair improvement musically and technologically. Tsukasa Masuko instantly demonstrates that he has learned to exploit the Famicom sound chip to create a lot of atmosphere; though both are short and simple, "Prediction" is able to create foreboding ambience even with FM synth and "Jump Up!" provides plenty of excitement. However, it isn't until "Omen" that Masuko at last offers something that extends beyond the minute mark and is actually fulfilling on a stand-alone level; intrinsically, the composition features little more than scalar runs, deep suspended chords, and a slow-building melody, but the forces are assembled in such a way that they really build tension and sustains interest. A setting theme such as this was relatively ahead of its time. Other effective mood-setters include "Another World" with its irregular metre, "Hallucination" with its beauty dreamy melody, and "Devil Speak" with its epic synthesized organ. Though these types of themes are now derivative staples, they were very well done for their time.

That said, the majority of the soundtrack follows the convention of most Famicom music at the time in both melodic focus and stereotypical style. There are modest yet triumphant character themes such as "Tokio Adventurer", rocking action themes such as "Dash Under the Ground", and endless superficial jingles. There are a fair few catchy tracks too, such as "Explorer" with its light rock vibes, "I Love Money" with its dated boogie feel, or "Death Match" with its racing rock rhythms and flashy solos. However, there are also many more uninspiring pieces, such as "Lady's Shop" with its instant looping and "Fall'n Gods" with its influence from Final Fantasy's grating hurry themes. A few Megami Tensei pieces also receive straightforward but adequate arrangements here. At least the soundtrack probably ends with its two best pieces. The final battle theme "Omega" creates so much atmosphere through the way it blends tense unchanging chord sequences with progressive rock keyboard improvisation. Though "Epilogue" is mediocre, the staff roll theme "Dawn of the Human Being" will inspire nostalgia and happiness with its slow serene melodies.

The album compensates for its lack of substantial material in the arranged second disc by Ryo Yonemitsu. This 45 minute album features the best tracks from the original scores enhanced with elaborate arrangements, high quality synth, and even the occasional pipe organ performance. A peculiar sound effects-laden take on "Prediction" sets a moody yet eccentric tone for the album before Yonemitsu dazzles listeners with one of his jazz fusion arrangements in "Micom"; the melody is faithfully preserved on saxophones while solos from flashy electric guitars and smooth soprano saxophones round off the mix. "Explorer" is similarly given an ecstatic retro rock arrangement, complete with a chiptune introduction and booming drum lines, while the arrangements of "Ex-Convict" and "I Love Money" suitably emphasise an 1950s American flavour. However, "Death Match" is probably the hardest and fastest rock anthem on the album, in line with the original material. Yonemitsu enjoys spending five minutes adding all sorts of solos and improvisations above the ascending chord progressions and edgy riffs that characterised the original. It's a pretty fun listen.

Moving away from the popular music tracks, "Devil Speak" is an expansive pipe organ solo performed by Michiko Aotani. Yonemitsu emphasises the simple yet emotional motifs of the original piece while elaborating on them through contrasting chordal and contrapuntal sections. It would have been difficult to treat the original better. That said, not all the entries are satisfying. The once perplexing "Labyrinth" is spoilt by cheap new age sounds while the synthy soundscapes of "Hallucination" lose the dreamy feel of the original. Although it features some of the hardest rock on the album, the arrangements "Battlefield" disappointingly ends after 1:46, while "Anfini" feels more like a pointless interlude. The last two tracks make up for the disappointments. "Omega" maintains the moody chord progressions and progressive rock improvisation of the original, but does so in a much more ambitious way; following a surreal interlude, the arrangement culminates in an eerie distorted violin solo before the recapitulation of the main melody. Finally, "Recollections" takes listeners on a nostalgic journey back into the album by blending reflective solo piano work with light rock sections.

Overall, there is a lot to be discovered within the Megami Tensei I & II package. The Megami Tensei soundtrack defined some of the elements that have made the series' music what it is today, but isn't a particularly fulfilling listen. While inconsistent, the Megami Tensei II soundtrack proves to be one of the better scores of the NES with its ambient themes and catchy gems. Even better, the arranged album is a very enjoyable experience and could have easily been released on its own. It has higher production values and more musical substance than most game music jazz fusion arranged albums, despite a few dubious choices and the dated feel. Taken together, this album is a worthwhile purchase for fans of the series' classic titles or those looking for some old-fashioned rock.