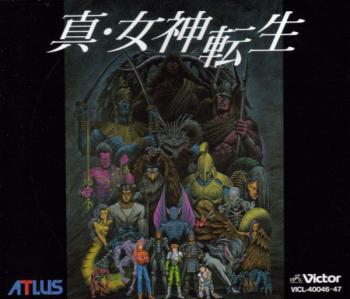 Shin Megami Tensei Law & Chaos is a joint original score and arranged album for the first Super Nintendo instalment of Atlus' flagship series, Shin Megami Tensei. Returning from Megami Tensei II, Tsukasa Masuko refines his ideas somewhat in the original score and helps to assert the series' musical identity more firmly. The original score features all the music from the game, although Victor Entertainment abruptly cuts rather than fades out pieces at seemingly random points. The second disc is a far more ambitious achievement featuring arrangements by musical polyglot Tatsuya Nishiwaki. While clearly an important release, is it a must-have?

After his stylistically derivative approach to Megami Tensei I & II, Tsukasa Masuko finally establishes the characteristic dark yet contemporary sound of the series in this title. "Title Demo", "Title", and "Dream" initially set a chilling tone with their emphasis on suspended chords and dissonant chords. They're very simple in their construction and not appealing as stand-alone music, but function sufficiently well in the game. Some of the ambience is even less tolerable on a stand-alone basis, such as the sound effects laden "Fusion" or hideously simple "Neutral", though at least these themes are relatively few. A lot of other scene setters, such as the bass-driven "Kichijoji" and "Shibuya", aren't particularly impressive on first listen and merely serve as unsettling background music. However, they have been immortalised as series' classics with more ambitious arrangements such as on Shin Megami Tensei: NINE, indicating at least the core ideas were there. The ambience is clearly approaching the boundaries of being worthwhile listening to...

After the unambitious action themes of Megami Tensei II, Masuko takes things up a notch here and really defines the rock element of the series. "Embassy" initially gets the pace going with rock riffs, but easily its best feature is its charismatic well-developed trumpet line. "Battle", on the other hand, is an enpowering blend of prog rock keyboard leads against rhythm guitar riffs. "Ginza" is probably the catchiest of the rock themes, so is predictably an old fan favourite, whereas "Boss" adheres a little too closely to standard rock formats yet is nicely punctuated. There are also a few non-action themes that differ from norm. For instance, "Home" inspires relaxation with its warm melody and waltz metre; however, the neo-classical twists of unusual chord sequences and instrumentation still give a subtle feeling that something still isn't quite right. "Shop" is probably the closest the soundtrack comes to offering a melodic and upbeat composition typical of most RPG soundtracks, though the rhythmical emphasis and funky quirks are still distinctly Masuko.

Some tracks also reinforce the Gothic flavour of the series. "Heretic Mansion" is a pipe organ solo that has a spectacular effect in context and has gone on to become a trademark of the series. I'm convinced from the straightforward, yet occasionally overly dissonant, writing that Tsukasa Masuko isn't classically-trained and is just imitating other fugues. However, he still does a convincing enough job and the result will be very emotional for most listeners. "Palace of the Four Heavenly Kings" is bound to mesmerise yet petrify listeners with its expressive ethnic-tinged woodwind melodies. The backing is a very simply blend of funk riffs, drum beats, and choral chanting, but it gets gamers moving and adds mood. The atmosphere is reinforced by the celestial chorale "Law". While compositionally straightforward and unremarkable, it is impressive how well the vocals were synthesized on the SPC chip. Following the surprisingly action-packed "Cathedral" theme, Masuko rounds off the soundtrack with another chorale in "Epilogue" and a sentimental ending theme written in the spirit of most RPG soundtracks.

While the original score lacks ambition or refinement, the arranged disc is surprisingly one of the best of its generation. Following an eerie opener featuring sound effects, Tatsuya Nishiwaki wisely opens the disc with a mainstream-targeted funk piece. "Wandering" uses the simple bass riff of "Shopping Center" as the basis for a seven minute band performance. With its extravagant guitar solos, dissonant bass guitar progressions, and dense drum beats, the piece sounds like would happen were Hayato Matsuo and Motoi Sakuraba to get together for a jam session. "Heat Waves" continues the improvisatory feel with an expansive piano solo. Nishiwaki focuses on a series of simple ideas, mostly derived from the arpeggios and melodies of "Dream", while gradually building into something very expressive and intricate. The blend of romantic, impressionist, and minimalist influences is beautifully done and the result is easily among the finest piano arrangements in game music.

There are also more classically-oriented pieces on the soundtrack. "Summons", for instance, is a sublime interpretation of the "Heretic Mansion" written for string quartet and harpsichord continuo. There is exquisite part writing during the exposition and the subsequent episodes are far more interesting in texture than the original. "Far Arrival" provides a romantic waltz interpretation of the once eerie "Home" theme on chamber orchestra. The body of the theme is lush and there is also a surprising cinematic interlude. "Abandoned Sky" is a much simpler guitar duet with ethereal synth backing, but still captures the serene mood of its original, "Law". The chaos returns with the final track "Sublation", an accomplished rock medley incorporating the battle themes from the original score. Once again, Nishiwaki demonstrates his ability to bring the most out of his source material and meld together all sorts of sections in an effective way. Whereas most of the previous arrangements simply featured good synth, this one, like "Wandering", benefits from the performance of a three man band.

There is lot on offer in the Shin Megami Tensei Law & Chaos album. The original score is relatively mediocre stand-alone listening, even for its time. However, it does fit the game quite well and helped to really establish the ambient, rock, and Gothic musical styles that have been a mainstay of the series. It's technically decent, although Victor Entertainment managed to make the soundtrack release less professional with their abrupt transitions. The arranged side is a little short overall, but makes up for it with long creative arrangements. I was stunned by Nishiwaki's mastery of so many styles on this release, whether mainstream-targeted or classically-oriented, and also how he managed to bring so much depth and complexity to intrinsically superficial originals. This album is a must-have for those who enjoy diverse arranged works, though the original score will be a more select taste and can also be found upgraded on the Shin Megami Tensei Sound Collection.