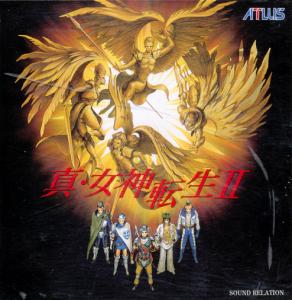 Shin Megami Tensei II Sound Relation was another joint original score and arranged album in the Megami Tensei line. Having defined the series' style on Shin Megami Tensei, Tsukasa Masuko returned to create a similar score. While slightly more diverse, the original soundtrack is far less accomplished than its predecessor both in and out of context. The arranged album attempts to make up for these deficiencies with an emotional experience presented on chamber orchestra. However, can it really suffice when the original material has little going for it?

"Neutral" demonstrates how most pieces in the soundtrack are structured. It repeats a four bar antecedent phrase and a near-identical four bar consequent phrase again and again for two minutes. There is nothing remarkable about the original phrases, accompaniment, or timbre, which didn't deserve to be published never mind repeated in the first place. The whole composition could have been created in less time than it actually plays for. Other themes actually exude some character, but still tend to be based on repetition of nothingness. Slow-building ambient tracks like "Title Demo", "Title", and "Memory Recovery" are effective in context, but like their Shin Megami Tensei counterparts, they are too simple and repetitive for stand-alone enjoyment. There are once again some tracks to brighten gameplay, such as "Gym" and "Shop", but yet again they loop before the 20 second mark. It's difficult to find a less interesting and less inspiring collection of music.

Even most of the battle themes lack any exuberance. "Virtual Battler" starts off with a promising uplifting chord sequence, but for some reason never actually introduces a melody. "Valhalla" is even worse since it is equally repetitive while being based on a rock chord sequence done to death. Amazingly, Masuko manages to create a composition with a bit of variety in "Battle", presumably because the game developers told him a ten second loop wasn't good enough. It's quite refreshing to see a bit of keyboard improvisation here, even if the rock harmonies and ensemble set-up are derivative. "Mid-Boss Battle" attempts a bit of flash too, but unfortunately completely ignores the sterile bass line. "Big Boss Battle" don't satisfy quite like the Shin Megami Tensei final boss theme either, since the initial ambience is lost by repetition of inane riffs. Either Masuko got really lazy or he was on a very tight deadline...

Are the Gothic entries any better? While unoriginal with its adherence to the solo pipe organ format, "Heretic Mansion" is at least moderately developed and refined. Masuko uses the instrument much less effectively within harmonic textures in "Demon Fusion" and "Terminal Point" despite the compositions being used at crucial points; it's clear that the composer adhered to conveying evil in such a clichéd way because it was most efficient for his schedule. Once again, there are also choral themes like "Law", "Chaos", and "Siren", but they again seem to have little substance. "Chaos" is a little better at the end of the game since it at least has a flute melody to add a slight contrast to the repeating voice chords. Although it was difficult to generate a dramatic arch with such monotonous material, Masuko truly disrupts the climax with his incorporation of "Disco" and "Casino", two humorous and catchy outsiders to the rest of the score.

And thus a miracle happens! The arranged disc shows that, with the correct arrangers and performers, it is possible to produce listenable music out of abominable source material. Atlus tried to take a highbrow approach by hiring English arrangers, the City of London Sinfonia, and Abbey Road Studio to treat the music. I'm still in awe of how the totally vapid figure of "Neutral" could be used as a focal point in a rich and relaxing orchestral arrangement. Admittedly the arrangement becomes tedious at times due to the narrow focus, but the motif itself doesn't seem to be problematic. Much the same applies to "Law" and "Market Place", which still lack an emotional or melodic core, yet suffice since they are bathed in pleasant orchestral sounds. The darker tracks tend to be better, such as the action-packed "Dark Temple" and brooding "Chaos", both of which are filled with contrast and emotion from start to finish. The performance certainly reflects the series' ethos of neutral, law, and chaos even more than before.

The tracks that hybridise orchestra and rock elements, such as "Passage to the Subterranean World" and "Club World", tend to have a tacky sound to them. That's largely because the cheap electronic instruments sound out of place with a chamber orchestra, though the actual arrangements aren't particularly good either. In fact, the latter resembles the song "No Limit" — which was topping all the charts at that time — more than any piece from Shin Megami Tensei II. Although overly accentuated, "Battle" is pretty enjoyable with its heavy blend of rock, electronic, and orchestral elements. Although it is surprising in theory that they would fit, the progressive rock keyboard improvisation and jazzy brass solos are especially well done. The final track "Devil's World" does bring out the old drum kit too, but it feels a little more fitting after so much tension has resolved and the arrangement enters an emotional climax.

The original score for Shin Megami Tensei II is by far the worst in the series. Masuko builds track after track on a couple of sloppy riffs and fails to offer anything remotely engaging or atmospheric. The orchestral arranged disc astonishes because it produces emotional and interesting arrangements out of such material. However, it doesn't stand up well in its own right, especially against the Megami Tensei I & II and Shin Megami Tensei Law & Chaos albums; it has many flaws between the unsubstantial melodic material, generic arrangement, and unconvincing hybridisations, feeling more illusionary than genuinely rich or emotional. It's relatively good, but still not good enough for seasoned orchestral listeners. Given neither original score nor arranged album are above average, only hardcore collectors or unpicky listeners should invest in this one.

City of London Sinfonia conducted by Nick Davies
Album was composed by Цукаса Масуко and was released on June 17, 1994. Soundtrack consists of 38 tracks tracks with duration over more than hour. Album was released by Pony Canyon.