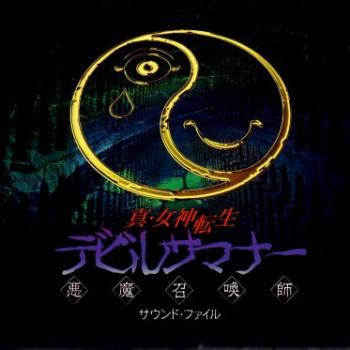 Released relatively early in the history of the Megaten series, The Shin Megami Tensei Devil Summoner Sound File is one of the few soundtracks in the not to feature Shoji Meguro working as a composer. It may not be the most technically astounding soundtrack for the Sega Saturn, but there's more then just technical to please the ear. Present on disc one, the original section of the album is composed by the duo of Toshiko Tasaki and Tsukasa Masuko. Present on disc two, the arranged section features interpretations by Taku Iwasaki, Hisaaki Takemori, and Isao Mizoguchi in the style of a live concert. Without Shoji Meguro, can these other musicians still capture the feel of the series and maybe even take it up a notch?

There are consistent elements to Meguro's work here — indicating that the composer used Shin Megami Tensei: Devil Summoner as an inspiration for his later scores in the subseries — so I don't think fans will be disappointed that it strayed too much. If you compare it to the Soul Hackers soundtrack done by Meguro, then you may find that the original Devil Summoner lacks some of the power and depth of Soul Hackers. Then again it did come three years earlier, although they were both on the Sega Saturn. Either way, they still had still had the capability of power and depth back then so the bottom line is that this album is good, but doesn't fully live up to Soul Hackers.

A lot of the soundtrack is low key and mood setting, which is fine, but at the same time it can be annoyingly repetitive and even a bit of a bore. Even the better themes like "Kitayama University" and "2D Field" can get a bit repetitive. It definitely keeps within the feel of the game and that's good. There's some more organic themes on here like "Afro Tea House" or "The River Styx" that are a bit repetitive, but not horrible. There are also some quirky standouts that are fun to listen to like the synthesized classical "Somatic Energy Institute".

I think the soundtrack does the fast paced styling a bit better than the sequel Soul Hackers. In particular, "Boss Battle" is definitely an adrenaline pumper for that time. The climax is also relatively exciting and leads into a decent staff roll theme let down slightly by subpar synthesizer programming. In the end, though, I just don't think this part of the album is fully worth it unless you want to learn a bit of Megaten history or are a big fan.

So maybe the original soundtrack isn't as good as Soul Hackers, but the Shin Megami Tensei Devil Summoner Sound File also uniquely comes with a second bonus rearrange disc that is a big incentive to get this album for any fans of this vast series. It's a full blown-out eight-track rearrange disc and it even includes some vocals for those who enjoy that. "And, Night Dawns..." is an arrangement of the staff roll; it may not be MIDI, but it is faithful in every other way; this second disc is great for fans of older Megaten music who have an adversion to old-school music. "Devil Scream" is the same way. It packs the realisticness and extra oomph that the source track "Boss Battle" didn't have. If you like the sound of that, then this is for you.

The vocals range from screaming Japanese men speaking English to soft-spoken Japanese woman speaking French. Though it's a bit distracting to hear the English singing, the first track "Overture" is still a fun track. I think "Jusq'ua Jout Se Leve" worked out very nicely too. I don't know French but it sounds fine to me. It actually keeps with that low-key feel, but it works it the right way. "Cercher" is another French sounding one, and it's funny how similar it is to the source track, "Otherworld Dungeon", yet much more entertaining. "Cercher" basically highlights anything that was good about "Otherworld Dungeon" and then takes it to the next level.