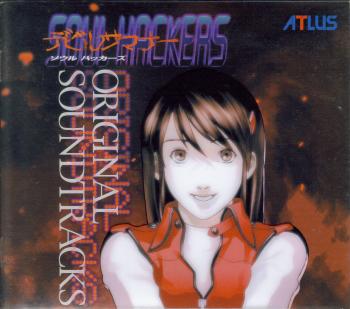 The Devil Summoner Soul Hackers Original Soundtrack brings Shoji Meguro back with the rest of the Megaten gang, Toshiko Tasaki and Tsukasa Masuko for the second Devil Summoner soundtrack. The album is a pure soundtrack with no bonus material, but maybe none is needed. After all, this is the complete soundtrack comprising over 100 pieces of music, which makes it one of the bigger Megaten soundtracks out there. However, is it one of the better?

At first listen, the Devil Summoner soundtrack seems to comprise of run-of-the-mill techno-jazz, but perhaps there is more than meets the eye (or ear rather). I think many Shoji Meguro albums are like this. First of all this music was created for the Sega Saturn in 1998, which was my first clue of how much more groundbreaking this music was than I previously thought. Second of all, there is some real depth and craft here after a second listen that shows that even if this was made in today's world it may still be worth something. It has a facade of run-of-the-mill techno-RPG music, but it is a bit more than that when you start digging through the dozens of tunes. I personally prefer a pieces like Mass Effect's "Uncharted Worlds" theme when listening to this style of music, but I know for a fact that there are people out there that will like this and I'm sure fans of the series already do.

I believe that Shoji Meguro does a much better job of bringing in the atmosphere than Toshiko Tasaki and Tsukasa Masuko who composed the previous Devil Summoner game. Listen to a highlight like "Algon Headquarters" and you'll see why. It's super haunting and fits that cyberpunk feel perfectly. It's has a great ongoing piano line yet isn't repetitive like the similar tunes on the previous soundtrack. This is Meguro's style at some of its very best. I'd call the style "atmospherically chill cyberpunk" and, if that interests you even if you aren't really a fan, then you may still like this album. Algon Headquarters is great for listening to out of game, but other tracks like "EL-115" seem very fitting to in game scenarios and although I wouldn't listen to it much on my music player, it's still a worthy addition.

There's one amazing odd ball hear and it's called "Drug Gear". I'm assuming this is a shop theme and it makes me think I'll be going to the shop more than actually battling during this game! It's groovy, happy electronica and although it's groovy, it still fits the game perfectly. It may be a personal taste, but I think most people would enjoy this track with its catchy solos and horns and whatnot. Other shop/building tracks are also unique. "Hakkaku Liquor Store" is a very traditional Japanese tune that I could almost see myself meditating to. "Somatic Energy Institute" is a very synthesized classical tune. It's also fun to hear variety but the only one of these eccentric tracks that is really worth it is "Drug Gear".

The album has its flaws of course. I don't think many of the action themes are very intriguing like the "Common Battle Theme". I know I wouldn't be able to stand hearing this battle theme over and over again. This goes for a lot of the battle themes. It's obvious that all of the three composers best work is typically ends up being more chilled music with the exception of the odd ball "Drug Gear" track. Tenkai Bypass may be one more exception though it falls a bit into that chilled category still. It's definitely the best fast paced tune on the album. If only this was the battle theme!

The composers have tended to experiment on a lot of their albums in the past and it shows in tracks like "Opening Music" on the second disc. It's a bit quirky, but it fits the style still. I don't think this is where the composers shine the most but it certainly brings a certain extra uniqeness to the album. There are also some short few second jingles on disc three that most won't be listening to, but its easily forgivable as this is the complete soundtrack. You'll even find cool old-school tracks like "River" that are a joy to listen to especially for long time fans. Don't miss this one.

Now, I have never played anything related to the Megami Tensei series, so this was a purely musical review. Maybe that lessens the credibility of my opinion in certain circumstances, but I think there are more conceptually intrgral soundtracks out there than Megaten ones. That being said, this soundtrack stood out musically in comparison to a lot of the pre-millennium Megaten soundtracks. Shoji Meguro and company haven't proven to be the best of the best in my books, but this soundtrack gets them close with style and atmosphere to spare. Did I mention you are getting over a hundred tracks?