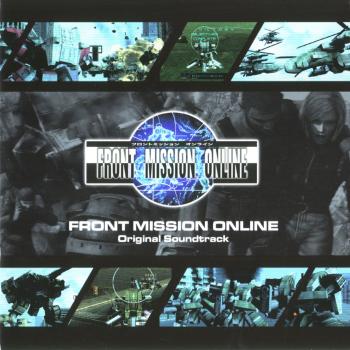 Front Mission Online brought familiar aspects of the Front Mission mech strategy series to the massively multiplayer arena, but ultimately ended up being one in a long line of flop Square Enix MMORPGs. The game's score, composed and programmed by Hidenori Iwasaki with assistance from Ryo Yamazaki and Tsuyoshi Sekito, principally features a Hans Zimmer-influenced militaristic style. Also included are a stylistically diverse array of arrangements of past Front Mission themes with focus given to the first, second, and fourth instalments to the series. The result is an apparent tribute to the Front Mission series that leaves quite a lot to be desired in terms of character, originality, and refinement.

Iwasaki's ten original compositions for Front Mission Online are mostly composed in the militaristic style he explored in Front Mission 4. The opener "Unsung Heroes" couldn't be more of a cinematic rip-off. It begins with a series of enticing snare drum rolls accompanied by suspended strings and is thickened by the addition of an ethereal choir line, a trite string progression, and some atmospheric sound effects. The piece exposes a slow and predictable string melody in its first major section, conveying images of heroism and tragedy. It then moves into a more aggressive brass-led section supported by choir chants that intensify certain progressions and some string ostinati that sound active despite actually being repetitious and stagnant. Given it's so derivative, it's surprising that it is quite emotionally engaging, but luckily Iwasaki knows how to craft a powerful militaristic melody and develop a touching chord progression, blatantly but effectively reusing a successful formula. Moving on, the unmemorable marches "Edge", "On the March", and "Chain of Command" offer bland brass melodies supported by static strings and percussion, with little differentiating them. The ending theme "End All Aggressions" is a curious but unremarkable twist on the militaristic format. The standard brass melody is rhythmically altered to attain a jazz feel, the accompanying strings sounds smooth and content, and a pop-influenced drum beat enters at one point. Unfortunately, its components are all very bland the composition lacks direction right up to its underwhelming conclusion.

Iwasaki's non-orchestral original compositions tend to be more original but less refined. Of note is "Shadow Weaving", which opens with the jazzy bass guitar progression of Front Mission 4's "Harbor Town" before finding its focus. It becomes dominated by an array of electronic cross-rhythms and shines for its percussive qualities. String crisis motifs and typical orchestral fare enhance the atmosphere, but make the composition sound too much like Harry Gregson-Williams' Metal Gear works to be considered a credible experiment. "Dark Flames" is the eeriest track on the soundtrack; it's made from a single melodic fragment, a thin layer of electronic beats, and some distorted sound effects. It's not particularly inspired or enjoyable on a stand-alone basis, but is likely effective in context. "Room" is Iwasaki's most mature composition here; it offers simple but evocative jazz piano lines, a lyrical but short-lived horn melody, and a gorgeously assimilated array of electronic beats and sound effects to create a futuristic urban feel. Similarly, the unforgivably brief "Silent Rain" features unconventional timbres and jazz-infused piano chord progressions to represent the city setting while "Strategies" adds a few rock riffs creating a similarly styled but more groovy piece. These three themes seem like a tribute to Noriko Matsueda, who was responsible for the glory days of the series' music. Sadly, though, they're not enough to save Front Mission Online's original tracks from the depths of mediocrity; overall, the composition is lazy and shamelessly derivative, inferior to both Front Mission 4 and Front Mission 5 ~Scars of the War~.

Front Mission 1, 2, and 4 receive a number of arrangements from Iwasaki in the album, while Front Mission 3 and Alternative each receive a single nod. Looking at the four Front Mission 4 themes, it becomes very clear that creativity is lacking in many of these arrangements and they're included out of a need to pad the score with content, not create some sort of musically substantial tribute. "Break Free" receives two arrangements. The first is near-identical to the original but is remastered to attain a more pronounced but rather harsh sound. It also adds a new section dedicated to the ostinato that runs throughout the piece with exotic percussion backing. Uninspired but tolerable, this mix could have been done in ten minutes. "Break Free II", on the other hand, adds a hard techno beat to the mix before introducing the acoustic elements; the result is an overbearing mishmash of styles that soon becomes repetitive. Also offensive is "Destinations", which senselessly reinforces the second iteration of its militaristic string basso ostinato with a synthesized electric guitar; even with the exotic elements of the original composition now absent, the rock-orchestral blend does not work, in no small part thanks to how minimal and poorly synthesized the guitar work is. Finally, "Hostiles" attains some pace with its new trance beat but soon becomes yet another march with a very repetitive beat. To summarise, the Front Mission 4 arrangements comprise of an already clichéd militaristic theme being reinforced by an uninspired, repetitive, and superfluous electronic beat, guitar riff, or percussion solo.

Iwasaki's eight arrangements of the score to the Super Nintendo's Front Mission are more appropriate. As expected given he rearranged and reprogrammed the entire score for the PlayStation's Front Mission 1st, his track choice is solid and diverse. It includes classics like "Manifold Irons" and "Terrible Density" as well as a few more curious choices like the surprisingly fulfilling 10 second fanfare "Win Back" and an ambient piano-based treatment of "Fear". The most enjoyable arrangements are of Yoko Shimomura's extremely catchy battle themes "Advanced Guard" and "The Evils of War"; the new synth enhances the crisp phrasing of these themes and both get rhythmically pumped up thanks to some new and fitting beats. On the serious side of the spectrum, Matsueda's "Military Government" and "Force Stall" are minimally arranged here; the arrangements enhance the dark and tense mood of the originals, but their harmonic sterility, while acceptable in the originals, feels deterimental here. The Front Mission 2 selection ranges from a conventionally jovial arrangement of "City of Dorgandy", a powerful orchestral treatment of "Player Battle (Normal)", a slightly grooved-up remix of "Arena", and the short but sweet "Level Up". "Assault" is given a surprising hard techno mix that explores the unpredictable metre and modernist piano lines of the original, while "Tension" is a drawn-out arrangement that hybridises numerous forces and only uses its distinctive melody fleetingly. A fine selection and solid treatment overall.

Despite being full of masterpieces, Front Mission 3's score only receives one nod here, "Invasion". Hayato Matsuo's original was a vibrant electronica meets jazz track that excellently fitted its intended purpose. Hidenori Iwasaki's arrangement labours listeners by developing from an ostinato, but features some pleasant brass solos. The result is less dynamic, memorable, or witty than its basis, but still acceptable in its own right, clearly intended for a subtly different purpose. The big surprise here was the inclusion of an arrangement from the techno fest Front Mission Alternative. "Airport" was a wise choice to arrange as it was one of the most catchy and atmospheric in the score. Iwasaki's main accomplishment was his synthesizer operating (the composers and arrangers all program their own work here contrary to most Square Enix scores). The ethereal treble portion of the track is beautifully smooth while the groovy ostinato below feels articulated yet not jagged. Little arranging is done, but a big improvement is still evident. Overall, I felt the score's arrangements were carried mostly by the value of the originals rather than their arranging, though there are exceptions. As nice as it is to commemorate the series' wonderful musical history, it's bittersweet that their inclusion here was largely to disguise artistic desperation with respect to original compositions.

It's only eight tracks before the end of the soundtrack that co-composer Ryo Yamazaki and co-arranger Tsuyoshi Sekito arrive. Their appearances don't result in an obvious change in stylistic direction, but they do add a degree of musical individuality and significantly different synth. Yamazaki's "In the Name of Honour" is probably the most striking original composition on the soundtrack, blending a warm trumpet melody with uplifting electronic beats. "All-Out War" is exceptionally layered and developed, incorporating aggressive bass and low brass sections, motivating trumpet-focused build-ups, and soft fleeting interludes. Tsuyoshi Sekito's arrangements are bombastic 'orchestra meets rock / beats' pieces. The arrangement of Front Mission 2's "Player Battle (Heavy)" risks going into the rut of "Hostiles" and "Break Free II"; its body is yet more militaristic fare accompanied by a never-ending beat; fortunately, its development is excellent as a result of the addition of his excellent electric guitar performance at 1:06. His arrangement of "Madness" from the same score wonderfully uses the electric guitar in an oppressive and percussive manner to reaffirm the rhythmical qualities of a piece dominated by rasping discords on anacrusi and other horror movie clichés. Sekito reaffirms his reputation as an arranger who is a bit lost without his guitar in an arrangement of Front Mission's "More and More"; the most offensive arrangement on the soundtrack, it's just interplay of two harsh sounding brass instruments with a vapid electronic beat.

The soundtrack to Front Mission Online is a mediocre effort. Its highlights are a few derivative Zimmer-esque compositions, several enjoyable arrangements of Yoko Shimomura and Noriko Matsueda's early compositions for the series, and a handful of moderately good works from Ryo Yamazaki and Tsuyoshi Sekito. Fans of the music to previous instalments to the series will be pleased by some of the arrangements here, but don't be expecting a particularly imaginative tribute; melodic, harmonic, and stylistic ideas are often thoughtlessly recycled and most attempts to add interest to the score are with superficial techno beats, rock riffs, and exotic percussion. It's bittersweet that the closest thing to a Front Mission arranged album available also reflects how the series has begun to lose musical value because Hidenori Iwasaki is being assigned to create way too many discs of militaristic music. The score is bound to work well in the game and is certainly enjoyable to listen to on a stand-alone basis. It just lacks true creativity and doesn't realise its full potential.