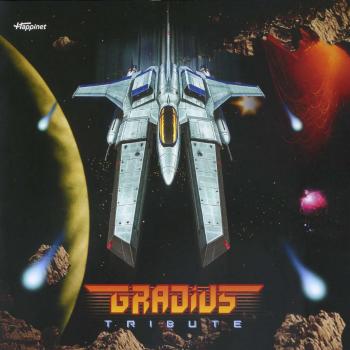 Till 2007, the Gradius series' hefty discography comprised of album releases all with either functional importance or creative merit. Series arranged albums have been of mixed quality and some of the earliest soundtrack releases have been made redundant by the Gradius Arcade Soundtrack. However, the series had never been guilty of being massively exploited by greedy record companies. That was until the Gradius Tribute, where money clearly came above purpose. Intended to be a multi-arranger effort like similar albums for Dark Chronicle or Street Fighter II, money wasn't used on big names. The prolific Takayuki Aihara and Motoaki Furukawa each contribute two tracks, but the other names are either little-known or completely unknown. Deceptive, but lack of big names didn't stop the Perfect Selection Gradius album from being great. A far bigger problem is with the track listings themselves. Only nine arrangements are featured, all based on material from the first three series Arcade games and three of them medleys. Obvious disappointments aside, what is the musical quality like itself? It mostly gravitates between the 'tolerable' and 'enjoyable' categories. But does the disappoint linger?

The album opens with a conservative arrangement of Gradius' "Morning Music". Arrangements maestro Takayuki Aihara successfully brings out the Baroque style and sedate feel of Miki Higashino's original by carefully treating it for chamber orchestra with harpsichord continuo. Unfortunately, the largo tempo chosen means the piece soon drags, exacerbated by lack of harmonic variety within its demanding 4:04 playtime. The production values are also quite low; while the woodwinds pleasantly radiate, the harpsichord adds a synthetic rather than authentic feel to the piece and is unconvincingly placed at lower volume than the rest of the instruments. Not bad, but nothing to relieve my disappointment.

Unlike "Synthetic Life", I can really appreciate Takayuki Aihara's remix of Gradius III's bubble stage theme "Aqua lllusion" on an intellectual level. It emphasises the fluidity and atmospheric qualities of the original while slowing down the tempo and providing a more mellow soundscape. Though there is a lot of repetition, there is also some amazing buildups and a lot of dynamism throughout the track. Unfortunately, a 6:30 playtime is just too long and the theme tires after a while. The exact opposite applies to "Challenger 1985" , an arrangement of Gradius' first stage theme by Shinichi Sakamoto of the Wonder Boy series. Sakamoto takes a simple original melody and subtly arranges it for a presumably well-synthesized acoustic guitar duet. While the arrangement is different and refreshing, it does not fulfil its potential due to lack of development. After 1:21 minutes of excellence, it simply ends.

Motoaki Furukawa's two contributions are also unremarkable. "Final Attack" is little different from his numerous Gradius arrangements on other CDs, such as Under the Blue Sky. Written in a jazz fusion style, it features Furukawa's trademark electric guitar interpreting Gradius' final stage theme. The soundscape is consistent throughout, with the accompaniment being purely functional if quite buoyant, while the slow tempo emphasises the piece's dreariness. The occasional elaboration on the melody and brief solo passage does little to relieve the tedium created by the repetition of the same fragments in the sheer majority of the piece. With "Burning Heat", Furukawa arranges a familiar theme in a familiar style too. Despite a fairly promising start and an extended jazz solo prior to the recapitulation, it soon tires with its presentation of the main melody on his semi-acoustic guitar. Its position after "Final Attack" simply emphasises how tame, hackneyed, dated, and boring most of Furukawa's modern work is.

There are a couple of other arranged medleys here. Ryo Sakai's medley of the Gradius II's stage themes is worth revisiting. After a tantalising slow spacey introduction, the medley jumps into a brisk and lyrical hard rock remixes of "A Shooting Star" and "Into Hostile Ship". Following intense but not too jarring interlinked renditions of "Shoot and Shoot" and "The Final Enemy", the piece returns to an epic sound similar to that of the introduction before the six minute mark. This leads to a beautiful mix of "Farewell" that would have concluded the medley in style were it not for the peculiar appearance of the ranking music after an abrupt transition. Yukio Nakajima also offers a medley from Gradius III. He adopts a guitar-led jazz fusion format, but unlike Furukawa's tracks a decent amount of energy is created by the offerings of a fast tempo, interesting harmonic figures, and quite a bit of thematic variety. The medley entertains with its lively guitar lines and dramatic turns. From the opening with the catchy two chord riff of "Try to Star" to a dramatic body featuring "Cosmo Plant" to a triumphant conclusion, it's all enjoyable.

Less enjoyable is "Gradius M5-20 Mix", one of Kimitaka Matsumae's controversial old-school medleys. It mixes a whole bunch of themes, fanfares, and sound effects together in a way that somewhat resembles the original sound medleys you might find on the Original Sound of Gradius CD. However, everything is twisted and warped in an eccentric way to give a really trippy sound. This is one of his better mixes and the Gradius track selection is good, but that doesn't really want me to endure six minutes of music that makes me feel like I'm going into a coma. Talking of inaccessible, Lpdrv's take on "Synthetic Life" is little more than generic techno beats punctuated by unaesthetic industrial sound effects for eight minutes. The beats and sound effects don't change with each bar, though every 30 seconds or so some novel element is added, albeit without introducing the melody or adding any sort of shape to the piece as a whole. If you don't like techno, you won't like this. If you like techno, you still won't like this.

This album is a massive disappointment. From the dragging introduction to the bittersweet Sakamoto track, unwelcome Matsumae appearance, and lifeless jazz fusion tracks all the way to the Lpdrv crapfest remix, the album bores and irritates me right the way through to the last third. The imperfect but enjoyable Gradius II Gofer no Yabou and Gradius III medleys redeem it slightly but, when medleys usually aren't my thing, I think this says something about how bad the rest of the album is. It's a pity that an album with such great potential suffered from very low production values. Save your money and buy another of the series' albums instead.