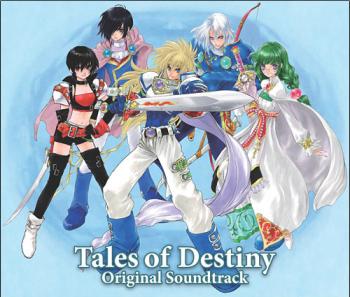 After remaking Tales of Phantasia for the PlayStation, Namco republished the second game in the series, Tales of Destiny, on the PlayStation 2 in 2006, nearly ten years after its original release. Beside updated graphics, additional locations, and new cutscenes, the game features a completely rearranged soundtrack on four discs including several new compositions from the famed duo Motoi Sakuraba and Shinji Tamura, who reunited once again for this project. Let's check out the remake score here and now.

"I tried hard to keep the atmosphere same as before, and I think I succeeded in various ways; intentionally drawing cheapness of the sequenced music era, newly arranging string sections, and rendering in a larger-scale while keeping the previous textures." - Motoi Sakuraba

Indeed, nearly all tracks from the score are arranged like the originals with the exception of updated orchestral and synth samples of course. Most music gained even more power than before while keeping the original atmosphere from the classic game alive. However, there are some nice enhancements done. "Tales of Destiny" takes the mystic and eerie title motif and transforms it into an lush orchestral piece with pleasant string passages in typical Sakuraba manner. In contrast, "The Storm and the Stress" starts immediately with its crisis atmosphere and synth melodies. This theme was one of my favorite tracks from the first soundtrack and I prefer the original version more than this one, because it had more development and personality. Nonetheless, the battle theme "Bare Its Fangs", the overworld theme "Unfinished World", and the upbeat tracks "A Submarine Remains", "Invisible Hand", and "Blue Dragon" sound clearly more powerful and exciting than their original counterparts and Sakuraba did an excellent job of arranging these and others with enhanced quality and passages.

Moving to the arrangements in the two last discs of the score, "Clocktower" and "Sink into Vise" open up the third disc well with Sakuraba's synthesized upbeat arrangements alá Valkyrie Profile. The second variation of the battle theme "Surprise Attack!" features a newly added violin together with frantic use of synth and percussion. "White Kingdom" is an astounding orchestral arrangement with effective use of string work, brass, and choir. In contrast, "Mysterious Night" makes use of Sakuraba's traditional choral work and lyrical harp arpeggios; a little repetitive, but also haunting and effective on its own. And what would Tales of Destiny be without one of his trademark themes, "Lion - Irony of Fate". Clearly superior to its original, the theme manages to keep the traditional arrangement together with updated instrumentation. The percussion is excellently done and, instead of frantic harpsichord passages, Sakuraba offers his traditional pro-rock style with various synth melodies and harmonies, including newly added sections.

Various FMV and event sequences feature not only the original music, but new compositions too. Motoi Sakuraba composed a handful new themes to the overall score for newly added cutscenes or events. Some are blockbusters like "Stage of Emergency", "Colosseum", "Justice and an Edge", and "The Last Judgement" with usual but excellent use of orchestration and percussion. Others feature nice surprises; he takes the "Lion - Irony of Fate" motif and transforms it into one mellow orchestral track and one piano solo. In addition, "Swordian Team" from Tales of Destiny 2 and "The Arrow Was Shot" from Tales of the Abyss make appearances; one with an heroic arrangement, the other in a neat piano arrangement, where Sakuraba shows his skills once again. Even "Bare Its Fangs" gets another arrangement in the form of the orchestral highlight "Progresses Toward the End" on the last disc. I really love this arrangement with its effective use of percussion, beautiful orchestration, and nice piano interludes. In "Perfidious Act" and "Rebel Against Destiny", the two final battle themes, Motoi Sakuraba simply whips everything out of these pieces and arranged them to their full potential with nice additional passages and bombastic orchestration as expected.

"The soundtrack fits each sequence very well and I'm fond of the melodies, yet frankly I can't help but feel something lame about the arrangement side of things and the instrument use. So I have improved it to some extent nine years later. - Shinji Tamura

And then there is the other side of the coin. The man behind what we call the typical Tales style in the form of bouncy and light-hearted, often electronic tracks. Shinji Tamura arranges his themes true to the original with no big surprises or additional arrangements like Sakuraba did. Tracks like "I Feel So Happy Today", "A Snowscape", or "Greenhill" sound as they could straight come from the original game with a little enhanced sound quality. Others like "Solemn Castle", "Port Town", "Lime Light Night", or "It's Pure Fiction" clearly disappoint with horrible arrangements of organ, percussion, or simply way too much reverb. But yes, there are also a few tracks which sound actually slightly better than its counterparts. "A Kingdom" and "The Laughter of Children" gain more energy with their playful melodies. "Dead Factory" really shines with the electronic arrangement and is one of the few themes where this style fits.

There are even a few surprises from this side. The "Ginnar Troupe" theme from Tales of Rebirth makes a slightly chaotic appearance in the form of "The Frequenter" on the first disc and Tales of Phantasia's "RALLY X" motif gets revived at the end of disc two. A handful of newly composed songs are also contributed by Tamura. However, unlike his companion's themes, they serve more or less as typical filler and ambient themes that don't do much on the soundtrack itself. The album closes with "ENDING", an orchestral suite of Tales of Destiny's theme song "To a Dream", originally composed by DEEN. Pretty nice, but also pretty generic if you ask me.

The duo took their original Tales of Destiny score and removed the dust of the years with polished up and extended arrangements. Motoi Sakuraba, once again responsible for the main and battle themes, did a solid and satisfying job here. His orchestral arrangements, even if they sound generic and forced compared to his previous works, are top-notch as usual. "Justice and an Edge", The Last Judgement", or "Rebel Against Destiny" are some of the highlights within. The upbeat and synth based tracks like "Bare Its Fangs", "Blue Dragon" or the famed "Lion - Irony of Fate" are also splendidly arranged with sometimes newly added bridges and instruments.

Shinji Tamura, however, is a matter of taste. It's a man who you can actually love or hate. Truly, I'm somewhat in the middle of these two. His contributions really shine during the gameplay as the bouncy and lighthearted tracks like "I Feel So Happy Today", "Green Hill" or A Kingdom" fit well to their anime scenery. However, most of the tracks are experimental filler tracks and way too unvaried and monotone. His arrangements here offer nothing new either with the exception of a little increased sound quality.

This four disc set is a worthy part of the wide collection of Tales soundtracks. If you're a fan of these series and their music this set is a definitely good addition and absolutely worthy of getting. But does this soundtrack beat the original one? Simple answer: no. My main complaint is that some of the themes lost their charming factor, which the original score had. However, if you can't decide which of these two to grab, this one is definitely a wise decision.

"ENDING" Composed by DEEN
"RALLY X" Composed by NBGI
Album was composed by Мотой Сакураба / Синдзи Тамура and was released on May 23, 2007. Soundtrack consists of 108 tracks tracks with duration over more than 3 hours. Album was released by King Records.