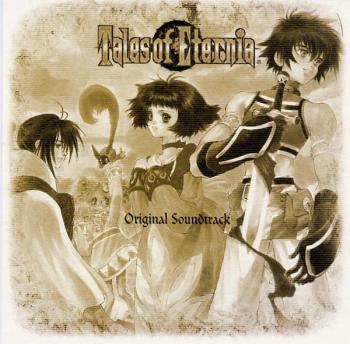 The Tales series is renowned for its music, but often for the wrong reasons. Motoi Sakuraba's train of thought sometimes gets wiped out when he composes for this series with Shinji Tamura and this is because of two reasons; Sakuraba goes to sleep at an ungodly hour in the morning and also has to compose a huge number of amount of tracks that would be a strain on anyone's brain and creativity. The Tales of Eternia Original Soundtrack has over one hundred tracks, but given the majority of them fall short of the two minute mark, they aren't exactly excellent ones. The main problem lies on the second disc, where there is the odd sophisticated track, but like honey in a bee's nest, swarmed and hidden by one minute nasties. This review will be a disc review; with there being so many tracks with little purpose to them, it would turn me insane if I were to comment on each of them.

The first disc on this album is enjoyable to listen to, as the majority of the themes have a catchy melody that will appeal to the casual listener. The critical listener, however, will notice that Sakuraba and Tamura generally fails to develop half of the themes to any great length and so each of these tracks ends with a heap of undiscovered potential left behind. The first track on this disc, "Main Title," even ends without a climax. The majority of the track is grand and it even rivals some of his title themes for the Star Ocean series, but with the track disappearing into thin air after a pile of repetition, it definitely feels underwhelming and uninspired. Soon enough, Sakuraba introduces us to another remotely interesting track, "Ship". It may have a pretty blunt name, but features warm and intricate melodies that are far from dull. Nonetheless, with the theme lasting for a mere 1:15, it isn't a track that will be memorable on first listen, since it doesn't receive a true loop like it deserves. Its upbeat successor, "Airial Board," also lacks development and harmonic profundity, further exposing the score's superficiality.

The score begins to pick up the pace 12 tracks in with "Mintche," a refreshing and wholly satisfying theme despite its simplicity. Its key feature is its beautiful accordion line, which is superbly mastered technically and developed musically. The emphasis on the instrument is pretty brutal — the accompaniment consists of just harp arpeggios, suspended strings, and exotic percussion — but there is enough variation and originality created by the accordion for it to more than suffice. Another light-hearted but gorgeous theme featured in the disc is "Morle," featured just four tracks later. It starts off with a quaint chime melody, but becomes far more emotional during the development section as an orchestra is added to the background of the track. The development is wonderful and unexpected. The subsequent tracks, "Undine Stream" and "Royal Observatory," are much the same as "Morle" in that they start off simply and then go into an orchestrated section. Even so, they show some variation in that the orchestration is only really added to produce a sense of mysticism. "Celestia Map," "Luishka" and several others are later examples of adherence to this formula.

The dominant features of the disc are various themes concerned with represented the battlefield. Sakuraba develops these themes far better than any other tracks on the disc, perhaps expected given the nature of his battle themes in his other scores. The first battle theme, "Ability Test," is filled with the composer's trademark prog. rock-influenced progressions and energetic drum use, but is also highly melodic, led by a decently synthesized rock organ. While some may have grown bored of the generic Sakuraba battle themes, its light-hearted melody and decent organ solo still make it an enjoyable addition. The next battle theme feature is "Efreet Gorge," which once again features organ, but differs because of its prominent use of agitated riffs to create a harmony and introduction of a section featuring copious amounts of distortion. It is more typical of a Tamura composition. Another action theme is "Railroad," which screams 'old-school game music' with its light rock melody, driving harmonies, and use of the trumpet. It offers a fun 'let's kill all the enemies' feeling that one could only ever associate with game music. Overall, formulaic or not, the battle themes are a fitting addition to the game and a highlight of the disc.

"Forest of Temptation" is the first dark theme on the disc. The timbre this track creates is amazing; a flute melody plays against some atonal synth while a warped sense of purity is given off. This track doesn't really have any melodic goodness, so will be more of an offering that appeals because of its atmospheric and creative qualities than anything melodic. "Below Regulus Knoll" is similar in nature; featuring prominent sound effects and a slow moving bass, a sense of tension is created as if to represent a foe getting increasingly closer. It proves to be an excellent representation of a dark dungeon overall. By grouping the effects that he utilised within his battle themes and these eerie themes, Tamura and Sakuraba create a selection of perfect militaristic themes. I won't go into to all of them due to the sheer amount of them, but there is one that stands out above the others. "Farah," an arrangement of "Farah Theme," is definitely the best track on this disc. The power of the bass and the strength of the melody make it delightful; the track glows with grandeur but also has plenty of depth with its gorgeous melodic progressions. All in all, Disc One is an impressive disc, but with half of the themes lacking any substance, it could have been better.

The annoying thing about the second disc is that it is filled with nonsensical tracks that last for just over thirty seconds. I won't describe these themes, as most of them don't even serve any purpose to the album, other than to point out to the listener that they were used in the game. I can only describe this disc as being totally substandard and even the majority of the battle themes are poor. One of the first battle themes featured is an exception, but it creates another problem in that it is entitled "Final Battle" yet is is only 0:47 long. The atmosphere created in through its hackneyed chromatic progressions is short-lived, and, with the instrumentation proving to be completely ineffective, it is also the worst battle theme on the album, not to mention ridiculously placed 70 tracks into the album. After listening to the work on Disc One, hearing battle tracks that have as much power as a broken motor such as "Mid Boss 1" is really dissapointing. Some fans may like the cheesy style of battle tracks such as "Strange Battle," "Celestia Battle," "Inferia Battle," and the bass-heavy "Mid Boss 2," but otherwise, these themes aren't worth listening to. As ever, Sakuraba and Tamura offers us some ominous exceptions, but these tracks, namely "Time Battle," and "Great Battle 2," are totally wrecked by the madness that surrounds them.

So, what next? Do Sakuraba and Tamura redeem themselves? Not yet. Instead of taking a similar route to his works on Disc One, they carry on with the newfound Disc Two style and creates a number of cheesy, yet inappropriate, tracks. The first of these is "Jini," a feeble jazzy track; the start of the track is effective enough, but when the brass synth is introduced in a totally uncoordinated way, everything goes kaput. The subsequent "Celestia Ground" would have been a nice and jolly theme, but features some very annoying additions. When the track transitions into a chromatic glockenspiel section, it becomes just as annoying as "Jini." Sakuraba dishes out plenty of these themes, with "Chat Theme," "Dance Music," and "Minigame 1" being amongst the endless examples. There isn't anything that I can compare to these tracks, but think of it as a Hanjuku Hero and Mario Tennis 64 blend, a fatal concoction. In all honesty, I pressed the stop button at this point, but I soon realised that I was wrong to do so.

With all of these tracks being the relentless bees that strive to protect the honey, the listener is finally offered some good tracks when they retreat. Most of these themes are incomparable to the tracks on the first disc, but on a disc that is full of preposterous creations, they come as a blessing. The first of such themes, "Aibird," is an airy gem that is a pleasure to listen to. Sakuraba uses a synth instrument and clarinet in conjunction with progressive rock harmonies and a drum beat to create a symphonic rock sound. "Seyfert Shrine" is similar in style, but this time, Sakuraba introduces a lovely secondary section in which the main instrument is given a solo line. The slow pace and perfect instrumentation in this track means it excels even relative to "Aibird." "Seyfert Observatory" shares the same melody, and although it isn't as good, it still rates as one of the finest on this disc. The major difference in this track is the instrumentation, which is now led by a music box.

Soon enough, Sakuraba leaves the style that he produced in "Aibird" and "Seyfert Shrine" behind him and moves on to explore the deep depths of darkness. "Strange Labyrinth" is the first of these and, with an increasing tempo, gradually increasing dynamics, and a repeated motif, it's truly agitating. "Bad Memories" is very similar in style, but strings dominate creating a timbre that is very different, offering a very menacing effect. Last but not least, the "...Theme" series that features on Disc Two is another asset to the album. Some of the tracks here are poor, but with there being three tracks that especially stand out, it is a decent collection of tracks overall. The best of these themes is "Aifread Theme," a proud and well-developed track, abeit very short. On the whole, Disc Two is a mixed bag. Three quarters of the disc is made up from uninspired tracks, but the rest is average to good RPG fare.

This album does have two immediate downfalls. First of all, the structure of the second disc makes it hard to understand the storyline of the game. "Final Battle" appears before "Mid Battle 1," and the opening and ending vocal themes are split on another split album. The second downfall is that the album features over one hundred tracks and at least sixty of these are totally uninspiring. The odd gem does pop up, however, and when it does, you'll be glad that you bought the album. It is slightly painful skipping through tracks just to get to a good one, but with dazzling themes such as "Ability Test," "Farah," and "Aifread Theme" being amongst the pleasures that you receive, your efforts won't go unnoticed.

It takes a lot of guts to listen to this album all the way through, and if you must, be wary of Disc Two. I wouldn't necessarily recommend this album to any casual listeners, but rather to album collectors and dedicated Sakuraba fans. This is generally a trend with the rest of the Tales series, the Phantasia, Destiny, Legendia, and Abyss soundtracks being notable exceptions.

Album was composed by Мотой Сакураба / Синдзи Тамура and was released on March 16, 2001. Soundtrack consists of 109 tracks tracks with duration over more than 2 hours. Album was released by Marvelous Entertainment.