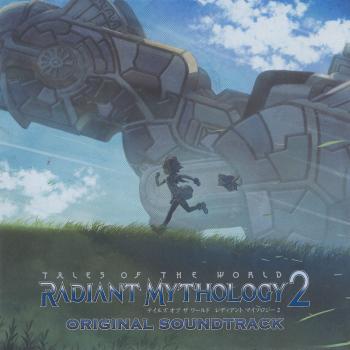 Tales of the World: Radiant Mythology 2 is the fifth entry in the Tales of the World series and successor ofTales of the World: Radiant Mythology from 2007. Takuya Yasuda, composer from the first game returns as composer for the major themes, including all arrangements of classic Tales themes. However, he gets assistance from a number of noteworthy guest composers for this entry. Kazuhiro Nakamura (Tales of Innocence) is the man behind the area themes and new battle themes, Masaru Shiina (Tales of Legendia) arranged two of his previous themes and also composed a bunch of new material, and Motoi Sakuraba, main composer for the series ,contributed six battle themes exclusively for this instalment. Lastly newcomer Kota Nakashima (Castle of Shikagami) created some typical filler music for various situations. Let's check out what this quintet has accomplished here.

Starting with the original side, "Radiant Mythology #2" opens the soundtrack in delightful way. Though it incorporates a few notes from the earlier "Radiant Mythology #1" motif, thereafter it changes into a completely new theme with soft harp, piano, and string melodies. You'll notice early on that the sound quality has largely increased compared to the first game, luckily. "Create a character" takes the same playful and catchy route as its predecessor and tracks like "Departure", "Happiness Time", or "Voyage" bring back the typical Tales manner in form of style. A noteworthy exeption is "Finale", where Takuya Yasuda uses a Celtic atmosphere with Irish flute, violin, and harp. Even if the piece is simple, it has a bittersweet atmosphere that is rarely expressed in Tales games. The new theme for Kanonno is a dreamy music box melody which is heard in two different arrangements on the soundtrack, though both are much too weak and bland compared to the rest. In "Kanonno #2", the original theme from the first game appears, sadly with a awful synth voice. The game's villain Goede gets a far more exiting theme with "Goede #1". Electric guitars and strings soar together with fast-paced percussion to pump up the adrenaline. Later some piano chords, choir segments, and xylophone notes are used as well. The second rendition is slower and a bit weaker as it focuses mainly on the dissonant guitar riffs.

Most of Kazuhiko Nakamura's area themes take an ambient route. "Amell Caves", "Perry Mines", or "Slime's Nest" are especially representative with their electronic rhythm lines and synth pads. When the soundtrack moves towards the second disc, the themes become a bit more diverse and melodic. "Prison Gate Cave", one of my personal favorites, uses an typical Middle Eastern arrangement while "Niata Monad" returns the Gothic atmosphere with organ and tribal percussion. "Coral Forest" uses a eerie melody together with electronic beat, which reminds me a bit of Michiru Yamane's work in Castlevania: Curse of Darkness. Meanwhile "Cave of the World Tree" is a climactic conclusion of celestial choir and organ; keeping up the comparisons, reminds me quite a bit of Final Fantasy X-2's "New Yevon Party", which had a similar tone, only less foreboding. Other noteworthy exceptions include "Moscoby Desert", a catchy but slightly repetitive interlude, "EX Dungeon", where the rock element of the series is once again incorporated, and "Negative Nest", which is a simple but promising electronica piece with some rock elements. All in all, all tracks are fitting its purpose well with various styles and arrangements. Sadly, the lack of development and monotony turns the pieces once again into fleeting stars.

In terms of battle themes there is a lot more to say. Kazuhiro Nakamura, even if the weakest of the three composers, shines with "Beginning of a Battle" and "A Desperate Battle", both catchy and energetic synth-rock compositions. "Holy Crusade" takes a step further while incorporating tribal vocals and percussion with the remaining arrangement. I've never heard such theme in the whole series thus far, which shows that it was an refreshing idea from the composer. After this, Nakamura even gets one more step further with the two last boss themes "Heavy Destruction" and "Goede -OverDose-". The use of this kind of hard rock also never appeared in the series until this. "Heavy Destruction", especially, makes use of hard guitar riffs and wild percussion. While keeping the same melody "Goede -OverDose-" uses a more Gothic atmosphere with the addition of choir chants, harpsichord and decreased tempo. Beneath "Holy Crusade," this is my favorite battle theme from Nakamura.

Motoi Sakurba is the second weakest composer from the three in my opinion. Though his three prog rock battle themes are catchy and energetic as ever, they easily lack on originality and memorability compared to earlier works. "Fight for Justice" sounds like a pretty generic and catchy Tales battle theme; you can ever hear some elements from "The Edge of a Decision" around 0:43. "Primal Rages" makes use of a bit more aggressive use of synth, but it is also quite reminiscent to previous compositions and simply screams Star Ocean. Nevertheless it is my favorite from the bunch. Lastly, "Mid Boss" is an disappointment in form of an arrangement. It sounds almost a clone of Tales of Symphonia's "Full Force", especially the Dawn of the New World rendition. At the beginning when the melody starts, I almost think of Star Ocean's "For Archieve", but maybe Sakuraba realised "Whoops... I think I already used this melody" and changed it after shortly after. The final three battle themes are more symphonic. If you like the second side of him you'll probably enjoy them. If not, you may want to skip them. The orchestration, especially the strings is top-notch as ever, but the tracks are simply a bit too bombastic and generic for my taste. My favorite is "Radiant Battle", where the composer at least tried to put up a little more melody within the pulsive arrangement.

The winner of the party is easily Masaru Shiina, famed for his orchestral work on Tales of Legendia. "into the battle" begins the aria with a bang. The pieces' strenght is easily the mix: orchestra, rock and electronica arranged wonderfully together with addition of a lovely violin section. It has all I love about Shiina and it has almost all which Sakurabas pieces are missing, mostly personality. "Triumphant heroes" take a similar manner, only a bit more focused on orchestral dramatic. My second favorite "Worth dying for" makes use of another freaky arrangement of orchestra and electronica, but Shiina goes a step further while adding female vocals and organ to the piece, which sounds simply awesome. "Rondo of sadness" features a gorgeous piano suite paired with orchestral motifs. The interesting aspect is the change of tempos and the addition of different sections within the track. But wait, there's one more. Yes, my absolute favorite Masaru Shiina track "Final damnation". Not even one of his Tales of Legendia tracks had such an enormous power which this track has. Shiina simply goes to his limits with using a powerful orchestral arrangement paired with ethnic sounds, which you can hear at the introduction and at some parts within. The developement goes from a slow and beautiful build up towards a pompous and heroic finale, which reaches its climax after the one minute mark. Excellent job, I'm so amazed.

In contrast to Tales of the World: Radiant Mythology, this soundtrack features over thirty arrangements from the whole series. Most of them are battle themes, but also some of the characteristic themes return. For example, tracks like "Chat Hut" or "The Van Eltia" are all close to their original arrangements, but with largely increased sound quality. The core tracks, however, are the famous battle themes. I safely can tell that almost all arrangements here sound excellent, most of them even better than their original counterparts. From Tales of Phantasia over to Tales of Destiny 2, all tracks sound much better than the originals. "Take Up the Cross" has a superior arrangement of synth and percussion, while the newly added electric guitar riffs in "Overcome Difficulies" and "Fighting of the Spirit" really help to make these pieces sound way more enjoyable. The biggest improvement however are the themes from Tales of Eternia. "Inferia Battle", "Celestia Battle", and "Eternal Mind" all sound reborn and a lot more powerful than ever with better brass, strings, or percussion. Also, the idea of using a violin in "Time Battle" is a neat idea and really fits the track. Continuing with the series' history, Tales of Symphonia is commemorated with tracks like "Full Force" or "The End of a Thought" which are easily more improved to their originals thanks to the sound quality. "The Die is Cast" from Tales of Rebirth also deserves special mention.

Masaru Shiina takes the time to arrange two of his earlier battle themes newly, namely "Battle Artist" and "Seeking Victory". While the later is nearly identical to the original he made a few important changes with "Battle Artist". The track is a bit shorter and focuses on the main sections instead of taking a extended experimental route. Also, Shiina arranged the percussion to more rock based and added some female vocals shortly before the loop, which sound very neat together with the strings. Moving forward to Tales of the Abyss, "The Arrow Was Shot" is a matter of taste. I personally like the original version more because it had more impact and power, and the synth here is a bit too "bleapy" for my taste. The same goes for "The Edge of a Decision". "Never Surrender", however, is the easy winner here with softer sound quality and nice guitar riffs. While the original was a bit clichéd and harsh this arrangement reveals the hidden beauyy of the track. Tales of the Tempest's "Encounter" is another example of a original, which wasn't that bad, but had a poor sound quality. The new transformation is a lot more improved. I also prefer "Furnace of War" in its Radiant Mythology 2 version instead of the original because of the guitars, which sound way better with the overall arrangement.

Almost one year has passed since the Japanese release of the game and, following no signs of a soundtrack release, Avex Trax finally prevailed in November and released the complete score for Tales of the World: Radiant Mythology 2. The waiting paid off: from many classic tunes in more enjoyable arrangements and generally increased sound quality, over to brand new tracks from famed composers Motoi Sakuraba and Masaru Shiina, this collaborative four disc collection has everything a Tales music fan needs. Even beyond that it features a wide palette of styles, from ambient and industrial music over to hard rock and even ethnic music. By far a massive improvement compared to the first soundtrack and a must-have for Tales music fans.