Tales of VS. Original Soundtrack 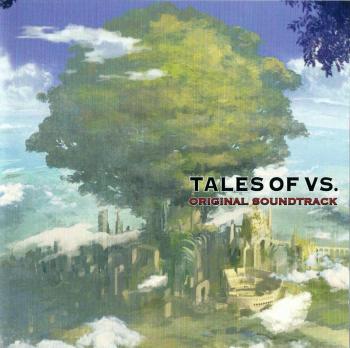 Tales of VS. Original Soundtrack
Front

Tales of VS. was a fighting game adaptation of the Tales series for the PSP, featuring an all-star character lineup. Though most of the game was developed by Matrix Software, the soundtrack combined the efforts of Namco Tales Studio's sound team, featuring Motoi Sakuraba, with Namco Bandai Games' sound team, featuring Masaru Shiina. While the resultant soundtrack featured some new compositions, the real highlight were the remixes of past Tales battle, ranging from Phantasia to Legendia to Hearts. Put simply, the NBGI team breathe new life into a musically stale franchise with their creative and exciting electronic remixes. However, not all of the resultant album is such a rollercoaster...

The first disc of the album is the more mundane of the two. It opens with a shortened version of Girl Next Door's opening theme "Be Your Wings". It's pretty standard J-Pop with upbeat vocals, piano backing, and electronic frills, though has a sufficiently punchy chorus to stand out for fans of this genre. However, those desiring the soundtrack release principally for the vocal theme might prefer to seek out the full-length version on the single instead. Subsequently, listeners are presented with a string of epic orchestral menu themes. The approach seems to be partly inspired by Soul Calibur's menu themes, but unfortunately Motoi Sakuraba's compositions don't compare in terms of production values or individuality. The use of brass and chorus on the title theme was intended to have a grandiose effect, but only sounds pompous and desperate, while the chord progressions on the "General Theme" are predictable and awkward. "The Silver Heroes" is the closest Sakuraba comes to producing a classic theme with its commanding rhythms and rich interludes, though still leaves much to be desired in terms of instrumentation and sampling.

Fortunately, Motoi Sakuraba does offer some progressive rock compositions to break up the dull orchestrations on the first disc. "Character Select" is an upbeat yet jagged keyboard-based improvisation featuring an irregular metre. Meanwhile "Flames of Treason" is a dazzling guitar-driven jam up there with the better Tales action themes. Listeners can also enjoy remixes of four Tales battle themes. Hearts' "Mysterious Arms Soma" is probably the most accessible since it is given a particularly upbeat and liberated interpretation. On the other hand, the orch hit use is overkill in Destiny 2's "Coup de Grace", but the ecstatic guitar lead makes up for it. Phantasia's "Who is Good or Evil" and Dawn of the New World's "The More That I Try" are far more tense and dissonant, but still very effective in context. The lacklustre first disc is rounded off by a series of orchestral jingles by Hibiki Aoyama. While Sakuraba's compositions sounded tired, these ones sound completely derivative and soulless. Even the slightly longer "The Battle Begins" and "Palace of the Winners" are highly uninspired.

Fortunately, the second disc of the album makes up for the largely disappointing first one. It is jam-packed with arrangements of popular Tales battle themes by members of the in-house NBGI Sound Team. While few would have expected electronic remixes could work, the sound team both understand Motoi Sakuraba's original compositions and are sufficiently talented remixers to succeed. Ryuichi Takada's "Take up the Cross" only emphasises the lyricism of the Phantasia theme's melodies with hyper-catchy sections such as the chorus. However, he also bolsters up the theme with pounding beats and refreshing trance elements, ensuring an especially dynamic accompaniment to the battle arena. Meanwhile Hiroshi Okubo's "Bares Its Fangs" and Akitaka Toyama's "Full Force" have a slightly more progressive feel with their jagged melodies and distorted synth, yet are still more pumped-up and exciting than their originals. There are further surprises with the likes of Yukiko Yamamoto's exotic take of a once-dreary Tempest theme, Akihiko Ishikawa's more welcome orch hitting in "Inferia Battle", or Hiroyuki Fujita's absolutely charming 8-bit take on the classic "The Arrow was Shot".

Go Shiina also returns to the series to offer two especially dynamic fusions. Tales of Destiny 2's "Theme of Battle" is a spectacular blend of Sakuraba and Shiina's musicality. The agitated melodies and bombastic chord progressions are so typical of Sakuraba's approach to so many Tales battle themes. However, the totally hybridised style and soundscapes reflect Shiina's character much more. There's everything from radiant violin leads and brassy countermelodies, to ethnic ululations and epic chorus backing, to feathery electronic beats and piano frills. Shiina packs so much into this arrangement and, thankfully, manages to ensure it still comes together as a whole too. He also presents a Legendia favourite in a new light too. "Seeking Victory" sounds even more dynamic than before with its exciting beats and driving melodies. Of all the arrangements on the album, it is one of the least radical in terms of stylistic shifts. However, the changes that have been made in both arrangement and synth are truly liberating and work powerfully in context too.

The two discs featured on the Tales of VS. Original Soundtrack are of different worth. The first disc is one of the most obvious examples of Motoi Sakuraba's tendency to produce bland and lazy compositions for the series. The only highlights a few decent progressive rock improvisations and some faithful arrangements of pre-existing battle themes. The second disc, however, is full of exciting and creative remixes of series' favourites by the much fresher artists at NBGI. Right from the refreshing Phantasia remix to the downright amazing Dawn of the New World beatfest, the sound team manage to satisfy. They ensure most remixes aren't just improvements upon their originals, but transformations too, and they carefully craft the arrangements so they work just as well in a fighting arena as any Tekken favourite would. Here's to hoping this talented team get the opportunity to work more on the series in future. Though the first disc is unfortunate, the second disc more than compensates and could have been released as a remix album in its own right. Any fans of Tales music or experimental electronica shouldn't hesitate to check out this album.