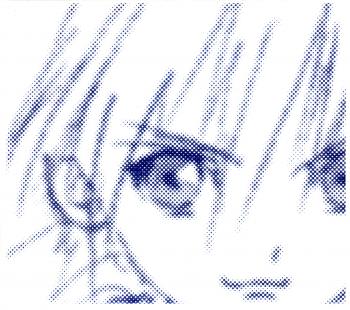 The fourth entry of the Tales history was the first true sequel to a game in that series, namely Tales of Destiny from 1997 for the PlayStation. Released in the late 2002, it was often confused with Tales of Eternia, because that game was released in North America in 2001 as Tales of Destiny II. However no one had expected the real Destiny sequel would be released only a year later. Series composer Motoi Sakuraba teamed up again with Shinji Tamura and created a four disc score which was published by Square's famous bankrupt label DigiCube.

In a similar way to Tales of Symphonia, the composers created a theme for some of the important characters and a counterpart arrangement. The beginning of the soundtrack introduces the theme for the hero, "Kyle", with a cheerful atmosphere delivered by pizzicato strings, piano, and a strong bass line. A much more deep and emotional version can be found on the second disc with "Kyle - Belief" in the form of a dramatic orchestration. The rest of the themes are more soft like the woodwind based "Rutee", the peaceful guitar and flute theme "Reala", or the sweeping and climatic theme for "Philia". "Rutee - Tender Affection" is also a nice arrangement of the original with its sweet piano line and soft strings in the background. As for the antagonists, "Elraine" is a beautiful theme which reflects the holy aura of that woman very well. But when she shows her true ambitions the music changes dramatically with "Elraine - Belief" with use of an wicked organ. Pretty mundane if you ask me, but at least it works for the atmosphere in the game. "Barbatos" relies on heavy synth to sound much more dissonant and savage.

The setting themes are a select taste in my opinion. They're nicely composed, but none of them is actually very strong and memorable with a few exceptions. One of the more beautiful themes from the introduction is "Breeze". The instrumentation is fantastic and makes the listener feel relaxed and easy-going. The world map theme "Step to Tomorrow" is in a style similar to Tales of Symphonia's "The Land of Sylvarant" with its peppy and heroic nature, only a bit more emphatic and straightforward. The first major town theme "Sacred Capital" also uses this traditional style and some harpsichord passages to deliver a holy and majestic atmosphere. I prefer the "Future" rendition more than this because it has more depth and drama. "Invitation to the Sea" is a welcome change with it's tropical atmosphere and nice piano and flute melodies while "Stone Paved Road" recalls again some memories of Tales of Symphonia, namely "Romany Caravan", with its spanish-touched guitar line. Similar to this, "The Lonely Rhythm" is also a nice atmospheric guitar-based theme and "Heat River" is a theme where the electric guitar riffs shine aggressively in conjunction with dramatic synthetic orchestration.

Moving to the second half of the score, "The Jungle" is also one of the more interesting themes. It's very ambient and desolate sounding, but the ostinati, rhythms, and atmospheric features makes it attractive to listen to. While "Infinite Corridor" is a typical Sakuraba theme with hectic use of percussion and orchestration like his battle themes, "To an Endless Sky" is similar as the overworld theme, only a bit more fast and simple. "Radiscrol" is a heroic and moving piece with loud brass samples and a strong bass line which reminds me a bit of the Star Ocean series. "Swordian Team" has a similar atmosphere, but displays its true power in Tales of Destiny's PlayStation 2 soundtrack. Both are very catchy and nice to listen to. The two variations of "The Decision of the Future" are also done in a splendid way. While the original again has an epic and heroic aura to prepare the listener for the finale, the arranged version is much more soft and serene with its use of strings and flutes. It's definitely one of the most beautiful pieces from this score.

But now we come to the much-anticipated part — the battle themes by Motoi Sakuraba, which are the highlight of almost every Tales game. This one features a lot of them, but to call them highlights would be a bit exaggeration this time. All are not that memorable, but only some tracks are definitely worth of listening. "Theme of Battle", for instance, features a catchy melody and fast-paced rythmns. Sakuraba makes use of his traditional techniques for percussion, bass, and organ that he has used before, such as in Golden Sun. The remix "Theme of Battle - Future" is more rockin' and based on electronia and electronic guitar riffs to make it sound more dissonant and desolate. "Break into Fragments" is the third regular battle theme and is a bit more enjoyable with the traditional use of rock organ and catchy melodies. However it reminds me in some way heavy Sakuraba's work in Golden Sun, for example the Saturos battle theme. "Alea Jacta Est" and "Dona Nobis Pacem", both with extraordinary Latin titles, are in similar style only more focused on epic horn and string passages to prepare you for the showdown. The second is a classic example of enjoyable battle music.

Moving on, the boss theme "The Dreadnought" relys more on energetic use of electric guitars and percussion to create and tense and powerful atmosphere instead of using catchy melodies. It features also a long and expressive development, but always sounded a bit too monotonous to me. "Coup de Grace" and "Vive Memor Mortis" are good examples of aggressive use of harmonies and percussion. The use of organ, strings, and orchestra hits is nice and pulsing here. Moving to the last half, the final battle theme "Wheel of Fortune" is a classic final boss theme from Sakuraba with his usual urgent percussion, organ, and use of electric guitar. The second variation is more focused on the use of choir to symbolize the determination of the fight. Finally, as I mentioned before, Tales of Destiny 2 is a direct sequel to original so features some arrangement of themes from that score. These include "Mysteries Night" from the first disc and "Hello Again", "A Snowscape", and "White Kingdom" from the second disc. On the third disc, there is a new rendition of Lion's Theme heard on "Lion - Fate Repeated", an electric guitar arrangement of the battle theme "Bare its Fangs" with "Timeline", two versions of "Dead or Alive", and a reprise of "Crooked Sight". Rounding off the arrangements is "Missing You" on the last disc.

Tales of Destiny 2 features another traditional styled soundtrack by veterans Sakuraba and Tamura. It also prepares listeners for the upcoming Tales of Symphonia, which used the same sound samples. However, as always in this series, there is a huge amount of tracks and there is hardly not much variation and styles within. The battle themes are nice, but sound all nearly the same and aren't as remarkable as Symphonia's, and the same applies to the area themes with a few exceptions. I think one of the best things are the few character themes with its variations, even if they're no milestones. All in all I can say that the duo did an solid job with this creation, but it's definitely not one of the strongest albums in the series, that's for sure.


From the liner notes:
Sakuraba did battles, arranges from the previous game and such.
Tamura did particularly the heroine (Reala) theme, mid boss, Barbatos and Rimul battle scenes.
Album was composed by Мотой Сакураба / Синдзи Тамура and was released on December 18, 2002. Soundtrack consists of 114 tracks tracks with duration over more than 4 hours. Album was released by DigiCube.