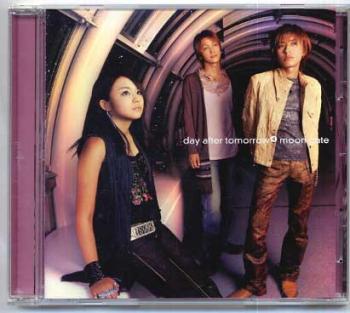 This is Day After Tomorrow's 6th single and it was released on September 3, 2003. This single reached #5 on the Oricon Weekly Charts and it has sold 190,546 copies. The title track was used as the theme song for the video game Tales of Symphonia. Here are my thoughts about the release.

I guess for gamers, "Starry Heavens" is Day After Tomorrow's s most memorable track. It was the theme for Tales of Symphonia and is full of energy. Now, it isn't as catchy as other tracks, but it sounds great overall. However, I'm still wondering why this was the most memorable track from them, as it isn't exactly anything to brag about. misono sounds quite nasally throughout and it definitely isn't at the top of favorites compositionally.

The B-side "Neverland" was how misono came up with the title of her debut album. It starts out with quite an impact and sounds pretty regal. Later the synths are placed at the front, though the chorus just seems to drag on by. The sad thing is that the song sounds pretty monotonous with misono doing the vocals. The verses are definitely better and, after a while, the chorus does become catchy.

Ugh, "These Days" is definitely the worst on the single. It's the slowest of the three, but is the most boring of them as well. misono tries hard to be exciting, but with everything coming at a slow pace, it just isn't enough. The "whoas" were also too much for the song and they annoyed me by the end.

Wow, after hearing all that praise for "Starry Heavens", I thought I would've liked it. Instead the song isn't one people should be raving about because it just isn't as memorable as "Day Star" was. "Neverland" is the best of the three, but not too high on my favorites. "These Days" also baffles me and in not a good way. I'd pass this single up.

These Days -- Lyrics: misono / Composition: Daisuke Suzuki / Arrangement: Mitsuru Igarashi & day after tomorrow
Album was composed by Daisuke Suzuki / Masato Kitano and was released on September 03, 2003. Soundtrack consists of 3 tracks tracks with duration over about 15 minutes. Album was released by Avex Trax.