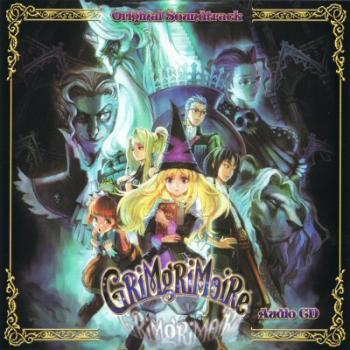 Grim Grimoire is a magic strategy game released by Odin Sphere developer Vanillaware in 2007. While the magic school setting seems inspired by Harry Potter, its plot seems more akin to Groundhog Day; the main character Lillet experiences the death of all her students and professors on her fifth day there and is suddenly propelled back to the day of her arrival, reliving her five days there again and again in order to uncover the mysteries that caused these deaths. The game's story is presented through cutscenes featuring animated character portraits against static but colourful backgrounds while gameplay revolves around navigating troops in real-time battles. While the game was well-received, it proved repetitious in ways that weren't intended — with battles, backgrounds, maps, and dialogue all tiring. The music didn't always help matters.

Its soundtrack was created by Hitoshi Sakimoto's music production company Basiscape. One of their most high-profile collaborative projects, Sakimoto's role was limited to the main theme and a few other items, while employees Masaharu Iwata, Kimihiro Abe, Mitsuhiro Kaneda, and Noriyuki Kamikura handled the rest. The soundtrack received separate Japanese and American releases. The Japanese release was available as a bonus with the limited edition version of the game, but featured misprinted track listings. Unfortunately, NIS America's purchasable soundtrack disappointed as they initially released a CD burnt on iTunes featuring the Japanese version's tracks, though later corrected their error. While the album releases were administered in a very sloppish way, it was refreshing that it received releases after so many lesser-known Basiscape scores were never released.

The soundtrack is composed mostly to be a low-key accompaniment to the game's story and battle scenes. There are nevertheless some tracks that are especially enjoyable on a stand-alone level. "Book of Days", for instance, transitions between lyrical sections based on a three note motif to fantastical woodwind and string solos; full of Kaneda's jazzy fingerprints, it is a dynamic and charming early addition to the score. Exceptional woodwind crafting is also present in "Sincerely"; tender with hints of romanticism, the variable support of harpsichord, piano, and tuned percussion adds to its tonal colour. "Begin Practice!" is a bright tutorial theme reminiscent of some of Iwata's Children of Mana efforts; there's just enough balance in the composition's pacing to suit the context it is used in. "Decisions and Shock" lacks harmonically but features affecting lead string writing and hints of nationalistic influence.

Moving on to the other half of the soundtrack, tracks 8 to 16 are concerned with portraying darkness, mystery, and terror. "Impatience" and "Suspicion" offer stunning clarinet and oboe solos to resonate against their dark soundscapes undermined by derivative crisis motifs. More ornately, "Under Grave Situations" combines persuasive tribal rhythms, acciaccatura-laden wind melodies, and extended glissandi while "In the Vortex of Tension" is a significant highlight thanks to brisk pacing and rasping brass lines. Polyrhythms and timbre provide the meat of Iwata's terrifying "A Wall of Darkness", while "Archmage and Despair" makes slow fascinating progressions as it depicts the game's antagonist prior to the ending theme being presented. The run of these tracks is a bit overbearing, but at the least the compositions tend to be evocative and quite good musically.

Overall, the soundtrack tends to reinforce the repetitiveness of the game. "Magical Classroom" provides a feeling of an ancient tower setting with its renaissance instrumentation and rustic drones. However, it feels mind-numbingly static and largely unaesthetic as a stand-alone piece of music, lacking embellishments after its style is derivatively established. "Ancient Secrets" is frustratingly composed in exactly the same format, though evokes desirable emotion at least in its 1:25 string-based interlude before returning listeners to monotony. The "Battle" theme has some strong if abstract ideas from Abe, but its emphasis on a particular ascending motif and resolute snare rolls adds an irritating element to the already tedious gameplay sequences. Even when compositions do satisfy on a stand-alone level, the score is still inherently repetitive in context. The gameplay and story sequences simply can't sustain a palette of 13 compositions, particularly when most are so ostinati-focused.

Sakimoto's role on the soundtrack seems to be small. His main theme for the game is brief and dominated by his timeworn trademarks, though still quite colourful. A highlight is Hiroaki Yura's violin performance that emphasises the shape of the main melody perfectly; as the composition was written to project the violin in all but its middle section, it feels not so obnoxiously focused on Yura as Eminence's performances. "Beyond the Tropics" is another subpar ending theme. Sakimoto opens with an obligatory rendition of the main theme but replaces Yura's violin with slightly less effective synth. The piece soon moves into a harp-accompanied section with an original melody, but it sounds too much like a pale imitation of his past epics to be taken seriously, while the eventual reemergence of the main theme on bells gives way to sickening choral-infested pomposity with more redundancy and triteness. Sakimoto also seems to be responsible for the three fanfares, all brief harp-infested efforts that feel elaborate simply for the sake of pretension.

With respect to the game, the Grim Grimoire soundtrack feels like a collection of generic scene and battle accompaniment themes rather than anything more individualised. All but a handful of tracks are cliché-ridden and the unintended abrasive split of the soundtrack from 'light' to 'dark' at the half way point diminishes any prospect of a dramatic arch being formed. When all other elements of the game are so repetitive, the relentless focus on pieces of music like "Magical Classroom" is grating. Nevertheless, the soundtrack is lightly recommended for those who enjoyed, say, the Odin Sphere Original Soundtrack. The soundtrack has a few great pieces and the majority of the others have some stand-alone merit, often thanks to gorgeous soundscaping. Basiscape displays promise here, but their popularity will be affected if they continue to engage in such economical productions and display so much indifference to the title they are composing for.

The price reflects the cost for the whole package (game + soundtrack cd).

The tracklist written on the CD is incorrect, and a corrected tracklist was later posted on the game's official site.