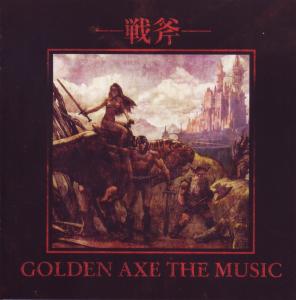 In recent years, Sega's record label Wavemaster have commemorated all sorts of classic scores with box sets and shorter collections. Golden Axe The Music was one of their most welcome offerings given it featured the original scores of a popular series that had surprisingly never previously been released on CD. The series is a stereotypical take on Conan the Barbarian complete with appropriate quasi-orchestral soundtracks. Perhaps what makes the series stand out musically is how its various composers adapt to synth limitations to still maintain a grandiose. Yet over the five main soundtracks featured here, there are plenty of bumps and disappointments along the way. Does the collection as a whole make up for the individual limitations of the soundtracks?

The album appropriately opens with the original score for the Arcade's Golden Axe. After setting the serious tone with "The Battle", the album leaps into the main theme for the series, "Wilderness". The main appeal of the theme is, of course, its heroic melody. While it doesn't come across quite as intended on 16-bit synth, the epic inspirations are obvious and the melody is catchy regardless. As with several other Sega Arcade hits at the time, the track is surprisingly developed too, undergoing plenty of twists and turns during its 5:18 looped playtime. The second stage theme "Turtle Village 1" is a technical marvel for its time, creating a truly haunting atmosphere with its synthetic soundscaping and striking trills, while "Turtle Village 2" has modernist inclinations and is reminiscent of the eccentric themes from Ghouls 'n Ghosts. "The Road of Dead" is even more impressive, since it develops in an epic cinematic manner similar to Conan the Barbarian, overcoming limitations of the 16-bit synth. The final boss theme has an awe-inspiring effect in context, getting the transition between the tense introduction to the anthemic climax just right. Other highlights on the soundtrack include the curiously punctuated boss theme "Battle Field", the catchy jingles "Thief's Theme" and "Beat It!", and the relatively reflective "Battle Axe March". Overall, Toru Nakabayashi crafted an atmospheric and emotional soundtrack for Golden Axe that was way ahead of its time. It's definitely one of the biggest pulls in the album.

The second half of disc one features the soundtrack to Golden Axe: The Revenge of Death Adder by Masanori Takeuchi and Tomoyuki Kawamura. The first thing listeners will notice in the tense character select theme is the richer yet unbalanced and distorted synth, which isn't necessarily an aesthetic improvement on its predecessor. Fortunately, there are still plenty of substantial compositions on the soundtrack, such as the grandiose main theme or the commanding "Waterfall ~ Strong Attack", both of which feature a passionate synth lead and thunderous timpani backing. They're as elaborate as compositions in the original composition and sound surprisingly good despite their synth. "A Hope for Tomorrow" is another one of the most emotional compositions with its blend of militaristic and spaghetti-western Ennio Morricone influences. Away from all the heroism, there are some more haunting tracks such as "Cave", "The Forest of the Mushroom", and "The Theme of the Boss", bu these are definitely among the weaker ambient themes out there with their repetitive and predictable sequences. Peppy themes like "Children of Mischief", "Children of Season", "Ending", and "Result" also lack substance. At least the duo make the climax of the soundtrack worthwhile with the final stage themes, "In a Fortress" and "On a Ship", as well as spine-tingling final boss themes. Overall, the soundtrack isn't as well-rounded as its predecessor and feels less of a musical or technological innovation. Nonetheless, there are still lots of goodies and its still bound to be a favourite for many out there.

Naofumi Hataya chose to embrace the console limitations on the Mega Drive's Golden Axe II rather than overcome them. This is most obviously reflected in "Character Select", where some upbeat bleeps somehow give charm and individuality to a commonplace funk jingle. Yet it's also reflected in the extremely straightforward, simple, but arguably elegant construction of the compositions. The first stage theme "Ravaged Village" might not be on par with "Wilderness", but it's amazing how Hataya managed to create something so memorable and dramatic with a straightforward melody and some stale chord sequences alone. Another outstanding feature of Hataya's musicality is his sense of lyricism. This gives natural drama and drive to the first boss theme, a fantastical aura to "Magician Stage", and a rocking spirit to "Ancient Ruins". From a technical perspective, these compositions are underdeveloped and unelaborate, but the strength of the phrasing compensates for the homogeneity in timbre and volume. This innate understanding of musical shape also extends to rhythms and rhythmical features can carry some themes alone. Whether the booming military snares of "Enemy's Headquarters", mystifying irregular shapes of "Dragon's Threat", or the climactic pulsations of "Deathadder", there's a lot of compelling material here. While Hataya transformed the series' music into something quite rich and progressive into stereotypical game music, but he still succeeded in fitting the game and entertaining listeners.

For the most part, the soundtrack to the Mega Drive's Golden Axe III was an improvement on its predecessor. Lighter themes such as "Wilderness" and "Ancient Mound" have a much greater sense of lyricism yet develop extensively too. Cinematic themes such as "Title Demo" and "Last Boss" are more intricately soundscaped and seem to take listeners on a journey. Even apparently superficial jingles such as "Thief Stage" and "Tender Hamlet" develop in ways that might be surprising. There are also numerous light-hearted rocking action themes such as "Bloody Street", "Ride the Whirlwide", and the anthemic "The Scorching Sand" that will appeal to those Ryuji Sasai fans out there. In general, the synth is a little improved too and this adds to the richness. Despite the higher production values overall, this score still has its routes in old-school game music tradition. Most themes still offer most of their appeal through their hooks, many of them fairly undeveloped melodies or funk-inspired basslines, but still sufice in and out of context. There are nevertheless a few stinkers, such as "Odd Stage Boss" with its overbearing percussion or "Crystal Cave" with its misplaced funk bassline. In summary, this soundtrack should provide Golden Axe fans with the best of both worlds with its strong melodic focus and ambitious stylistic references. The synth is still humble and it is less consistent than some entries in the series, but its still a decent listen.

Returning back to the Arcade, the music for Golden Axe: The Duel is present on the third disc. Kazuhigo Nagai instantly demonstrates his ambition with the bold soundscapes of "Title" and timpani clamour of "Character Selection" before offering his first full-length composition with "Kain Blade". The resultant composition is a little disappointing with its incohesive introduction and random voice samples, but it eventually gains some direction at the 0:25 mark with the entrance of an expressive clarinet melody; while its synthesis is about average for 1994, the slightly more realistic and resonant instruments are quite welcome. The soundtrack tends to preserve the militaristic feel of the series with its formulaic snare use while retaining a somewhat ambient tone with its atmospheric use of woodwinds and strings. However, these features aren't sufficient on their own, as Milan Flair" and "Gillius Rockhead" demonstrate; neither lack a clear melody or form, so have a stumbling sound that is largely unappealing. There is a little diversity nevertheless with the bustling saxophone-led jazz improvisation "Jamm", the traditional Asian wardance "Doc", and the cheesy rock anthem "Panchos". "Keel" is one of the darkest compositions with its dense counterpoint involving harpsichord and guitar, though sounds rather amateurish too, while the tribal wardance for "Death Adder" really suffers for its low quality samples. At least Nagai seems relatively at home with the numerous ending themes. However, it isn't enough to rescue a largely aimless soundtrack.

In Wavemaster tradition, there are also two ported soundtracks on the collection. The second disc opens with the Mega Drive port of Golden Axe that a lot of fans will be familiar with. It loses much of the intricacy and mood of the original in favour of a superficial choppy sound. Nevertheless, the melodies of the original tunes come across well and "Wilderness" sounds like an authentic chiptune anthem. The Saturn version of Golden Axe: The Duel occupies the second half of Disc Three. Many pieces get much-needed sample upgrades, but they're still pretty primitive in sound and some pieces such as "Green" are more like downgrades. However, a few pieces are also completely arranged too, such as "Jamm" that loses its bop sound in favour of a smoother funk-influenced one. Rounding off Disc Three, Tomoyuki Kawamura's "A Hope for Tomorrow" basically reflects the type of sound much of the series aspired too. It's a straightforward orchestral war anthem with its bright brass melodies, imposing chordal accompaniment, and of course brisk snares. Nevertheless, The orchestration is extremely plain and the samples lead much to be desired, so those looking for authentic barbarian-style music should stick with Basil Poledouris. Meanwhile Makito Nomiya's "Axe Duel Arrange Ver." sounds different to everything else on the soundtrack with its techno focus. Though it verges on generic too, there are some experimental elements and the powerful renditions of "Wilderness" are quite welcome. It's an above-average mix, but only really worthwhile as a bonus rather than a selling point.

Despite its strengths, Golden Axe The Music is far from perfect. For one, the music itself often comprises of uninspired cinematic emulations that don't always make the most of their limited synth. Though there are highlights in the collection, particularly in the first soundtrack of the series, there are probably more lows. Furthermore, the collection is incomplete with the music for Golden Axe: Warrior, Golden Axe: Ax Battler, and Golden Axe: Beast Rider being omitted in favour of two often superfluous ported soundtracks. Nevertheless, this is likely the best Golden Axe fans are going to get and it's still a bargain given five soundtracks and two bonus tracks are offered. There are still plenty of fine melodies, emotional soundscapes, and grandiose moments to find, so it's worth seriously considering.