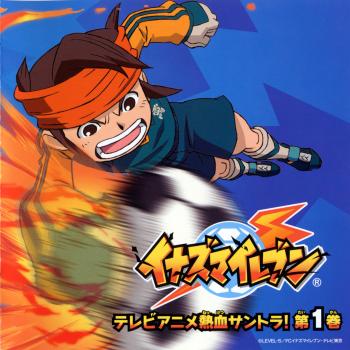 The Inazuma Eleven TV Animation Hot Blood Original Soundtrack Volume 1 will be instantly familiar to anyone who has listened to Yasunori Mitsuda's own Inazuma Eleven Original Soundtrack, as well as anyone familiar with his work in general. However, the latter group will still find some welcome surprises along the way. The soundtrack combines classic Mitsuda sound — light, playful themes as well as heavy orchestral ones — but adds Natsumi Kameoka's orchestrations and interesting electric guitar parts to the mix, neither of which are often seen in the composer's résumé. Is it a worthy purchase for those who own the quite similarly styled soundtrack to Level-5's hit DS soccer-RPG? Read on to find out.

I'll admit that I haven't seen the anime that this soundtrack is based on, and nor do I intend to anytime soon. Having fully enjoyed both portable adventures of the motley Inazuma crew, I see little reason to revisit them in televised form. Having played the games, however, many tracks from the soundtrack leap out at me with welcome familiarity. To drive home this point, the soundtrack opens with, what I assume, are two of the anime's opening and ending themes; these also serve as the opening and ending themes to the two versions of the second DS title. "Maji De Kansha!," performed by T-Pistonz, is an enjoyable track, to be fair. The vocals are a bit abrasive, but the melody is delightfully bouncy and I can't help but love the trumpet dancing in the background. We are next treated to "Tachi Agariyo," performed by T-Pistonz as well. The piece is rather similar in style to the preceeding one and most comments there apply here, though I must say that I enjoy the first track a bit more.

After the openers, we hear the ending themes, starting with "Seishun Bus Guide," performed by Berryz Kobo. This piece feels a bit more subdued, probably due to the change to female vocals, since the instrumentation is just as bombastic (though, enjoyably so) as the previous two. The final vocal, "Seishun Oden," performed by Twe'lv, is the most laid back of them all, though not by terribly much. In summation, the vocal themes are so stylistically similar that, if it wasn't for the change in vocalists, I‘d have trouble telling them apart. Despite their similarity, they are all fun, if a little lacking in depth.

Finally, we get to the meat of the soundtrack (at least, in this humble reviewer's opinion): Mitsuda's compositions. To anyone familiar with the roots of the series' music on the DS, the first Mitsuda track, "Raimon Junior School," will be instantly familiar. For those unfamiliar with this track, it sets one of the prominent moods to be felt throughout what is to follow: light-hearted, bouncy tracks, not unlike Mitsuda's work on Hako No Niwa, but perhaps a bit more driven melodically. However, it also offers an extremely present surprise through Natsumi Kameoka's orchestrations. Whereas the DS titles featured synthetic instruments, albeit extremely sophisticated ones, all of the tracks on this soundtrack are fully orchestrated and this breathes a new life into them.

There are plenty of oher composiions that retain Inazuma Eleven's characteristic sound. Listen to "Unmotivated Club Members" to hear a slightly more sinister, though by no means unpleasant, take on this form. "The After School Paradise" also fits this bill, with a slightly more melodramatic tone. See also "Wind and Adolescence," one of my favorite tracks from the original DS soundtrack, beautifully rendered with full orchestration and excellent arrangement. The melody pines for the old days of youth yet serves as a gentle reminder not to get hung up on the past, and to still look toward the future. Likewise the following track, "Let's Play Soccer!," is a short, fun little ditty that... doesn't do terribly much. I'm sure it works in its place, but most listeners would feel no harm skipping it.

There are darker tracks as well. "Adversity" works very well as a tense mood-builder, as does "The Upsetting Imperial". The latter initially sounds similar to the composer's work on the Shadow Hearts series — by no means a complaint — but subsequently incorporates a very pretty melody on the violin. "Mystery", on the other hand, reminds me of work Mitsuda jas done on the Xenosaga Episode I soundtrack, specifically that game's similarly titled mystery piece. This feel extends into the next two tracks, "A Creeping Peal of Thunder" and "Black Shadow ~ The Theme of Kageyama." All three tracks sort of mesh together, not in an unwelcome way, but perhaps it would have worked better had they been spread out a bit.

Moving on, there are plenty of more bombastic, almost militaristic sounds, featured as well. The perfect example of this is also the first of this type to be featured, "Theme of the Imperial Academy ~ The Imperial Academy Has Arrived!" Think the militaristic themes from Xenogears, with a slightly lighter tone. It works quite well. "Stand in a Circle" is a bit more hopeful, but also depicts a scene where to grasp such hope would be a tenuous task. Less impressively, "Amazing Special Move" builds a very nice mood, though fails to do much for itself. "One Minute of Miracle" works better than its counterpart, featuring a lilting melody on the strings over a militaristic backdrop, but still leaves a bit to be desired. Finally, "The Legendary Inazuma Eleven" comes full circle, portraying a scene of victory, with softer parts interspersed throughout the militaristic beat.

Of course, what Mitsuda soundtrack would be complete without action tracks? And there are an absolute plethora of them found scattered amongst this CD. "Activate! Burning Phase" features a Mitsuda sound that will be almost entirely foreign to anyone that hasn't heard similarly styled tracks on the Inazuma Eleven soundtrack — featuring a rocking electric guitar over a fast-paced string melody in the strings. Thanks to the percussion, this track displays a lightheartedness that is entirely individualistic. "Theme of the Imperial Academy ~ The Imperial Academy Has Arrived! ~ Death Zone" is a fast paced version of the Imperial Academy's theme that doesn't lose its force and effect over the frantic rhythm. The related "Mortal Battle with the Imperial Academy" slows down a bit, but retains the preceding track's fervor. It's a fun track, but I can't help but feel it a bit lacking. "Go, Raimon!" starts off a bit weak, but quickly becomes a fusion of bounciness and a more serious display, between its tense melody and quirky percussion. It sounds fantastic, though a bit weak, as if the instrumentation doesn't have enough of a driving force behind it.

This trend of weakening battle tracks is immediately reversed with "Official Matches," another lighthearted track with a more serious tone driving it. The melody in the strings is more enjoyable than one would expect in a track depicting a soccer match, and it works well. "Soccer Battle," while not quite as enjoyable as its precedent, still manages to delight. "Burning Phase Special (Level 5 Vision 2007 Version)" sounds much the same as previous battle tracks, though it features a bit of a jazzy feel to it in places that helps it stand out, as well as a neat little guitar solo. Those who played the original game will recognize "The Crusade of Gods" as the music accompanying the final battle, and it manages to be just as melodic and lyrical here as the original version was. It stands out pleasantly well amidst a sea of battle tracks that, while all generally well written, fail to achieve a sense of individuality.

I've saved my three favorite tracks for last, though mostly because they wouldn't fit neatly into any other previously mentioned category. "The Thoughts of the Elevens" is the only instrumental taken from the second DS title and it is just as beautiful here. It features the same orchestration as it did there, but this time with the weight of an orchestra behind it. "Sad Past Piano Version" is another soft (piano only, of course) track. This is classic Mitsuda here, and it shouldn't be missed. "Sanctuary," the album's closing track, is a bit more active than its DS counterpart. It offers a new glimpse into the piece, and evokes memories of earlier Mitsuda works as well. This is the only track on the album whose melody features the composer's more ephemeral side, and its buildup, while gradual, is very well balanced and enjoyable all the way through.

Honestly, after Soma Bringer, I wasn't too impressed with Inazuma Eleven's soundtrack. It was very well done, but besides for a few choice tracks, seemed to be a bit of a step down for Mitsuda. The anime soundtrack is based far more off of the first DS title than the musically superior sequel soundtrack, to which I eagerly await a soundtrack release. It suffers a bit because of this. Of particular note is the repetitious nature of both the darker and the battle tracks. While any of these are excellent on their own, they clump together into that unfortunate musical goop of 'sameness'. The lighthearted tracks fare far better, as do the gentler, melodic ones.

I would say any fan of Mitsuda should check it out, but newcomers to his work would do well looking elsewhere, whether to one of his countless classics, or the much more recently released, aforementioned Soma Bringer Original Soundtrack. Is it a worthwhile purchase if you already own the Inazuma Eleven Original Soundtrack? It depends how much you enjoy it. The tracks sound wonderful orchestrated and fans of the original would greatly enjoy hearing new life being injected into these pieces. If you didn't find particular interest in the soundtrack to the DS title, then I can't really recommend this one. Most of the tracks are indeed recycled, though arranged and orchestrated. All in all, this is an average Mitsuda soundtrack, hopefully paving the way to an official release of the soundtrack to Inazuma Eleven 2.

First volume of the anime soundtrack. Contains 1 CD and 1 DVD.